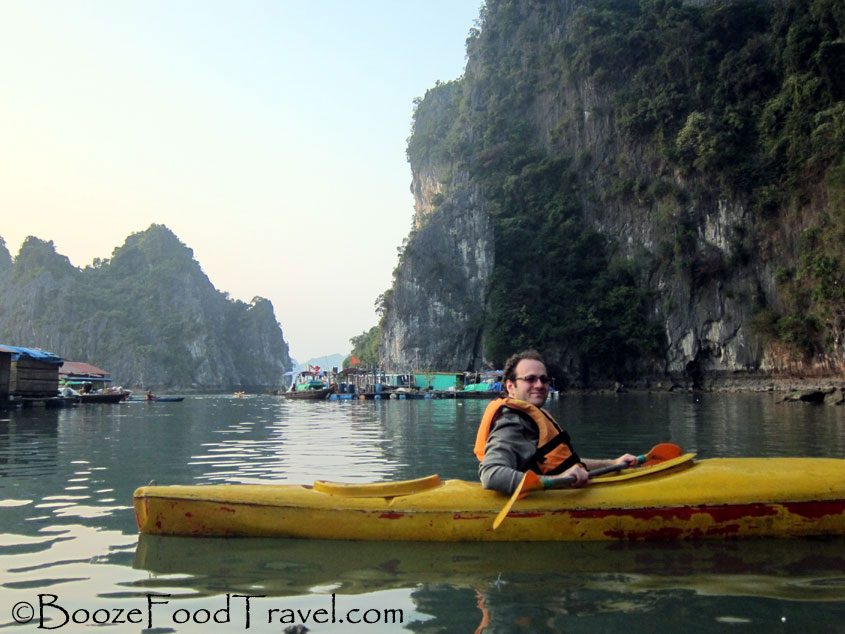 I’ve previously written about staying healthy while traveling, mostly in relation to avoiding stomach/intestinal illnesses in countries with questionable food safety and hygiene standards. But after my sixth month of traveling, I realized there was more to health than just not getting sick.

I was sitting at my computer during work while living in Taipei when I looked at my stomach. This was more than navel gazing. I was getting rather soft, and it looked like I had packed on a few extra pounds–all those bowls of beef noodle soup, cheap dumplings, and baozi were taking their toll on me. But this wasn’t just about Taiwan; Vietnam didn’t help my cause–it was difficult to walk anywhere in Hanoi, and too hot to walk far in Saigon.

For more than six months before I departed on this current journey, I spent a lot of time at the gym in addition to my regular bike rides when the weather was decent. For the first time in my life I felt I was in pretty good shape.

Getting out for a hike

When I arrived in Tokyo, I set out on a lot of long walks and a few hikes–Oyama and Takao were my favorites. Those hikes were more difficult than what I experienced in Taiwan and Korea (so far), yet I felt less fatigue on those hikes in Japan.

Eating healthier outside and at home

When I realized what I had become, I set out to get more exercise and eat healthier. For most of my lunches and dinners in Taipei I turned to the vegetable options at the local restaurants and cut out the snacks, which was disappointing because I wanted to try more of the local snacks. I also began taking the the YouBikes out more often. And while working, I attempted to get a little exercise in my small apartment–not much you can do with limited space and no equipment.

Korea has helped me get back into shape for the most part. I’ve definitely lost the weight I gained. Not only am I eating healthier in Seoul, but I’m getting a lot more exercise. Eating healthy is simple here–food prices are quite high. I’m not about to pay $8 for a small piece of meat, which means I’ve turned to a mostly vegetarian diet during the week (I still eat out on weekends to experience the local cuisine). But even produce can be expensive here–at least $1 per apple unless I get lucky with a street vendor.

Foods that I’ve found to be cheap or reasonable include tomatoes, green onion, leek, mushrooms, bean sprouts, traditional fish cakes, and tofu. Mixing most of these together makes for a rather tasty and healthy soup. Add to that my usual dinner that consists of either a mung bean and barley soup or kimchi pancakes, and I’m on a healthy diet (that mung bean and barley soup is similar to the soup I used to make often back home). I’ll admit that my meals are a bit boring and I have strayed a bit–a few snacks and even frozen dumplings for variety–but it hasn’t been a big deal.

Using some estimates with the MapMyRide app, my daily calorie intake is not much more than 1000 (but that doesn’t include going out for a beer after work). And even though I’m not consuming a lot of calories every day, I feel full and I’m consuming my recommended amount of vitamins.

I’ve gotten in the habit of walking close to five miles every day, during my lunch break and after work. I also took the advice from another travel blogger (unfortunately, I can’t remember which one) and bought an elastic exercise band–there are a lot of sports equipment stores near me. This is a great piece of exercise equipment because it’s versatile, light, and takes up very little luggage space. When I have some downtime at work, I can get a little more exercise in the limited space that 12 sqm provides. There are plenty of websites out there for various exercises, which definitely helps while traveling and living in tight quarters–the exercise routine has to change with the space.

What are your recommendations for staying healthy and fit while traveling (or even when not traveling)?