I had Memorial Day off this week and decided to go for a hike in Seoul. There are more than a few mountains to hike within the city limits ranging from fairly easy to difficult — I chose a moderate hike followed by an easy one (I think I did that backwards). It was a day of hiking Yongmasan and Achasan.

Beginning with a hike to Yongmasan

I started from Yongmasan because it seemed easier to get to. I half-assed my way to the trail. I found the artificial waterfall that’s near the trailhead, but I guess someone turned the water off. The road nearby had a locked gate, and I cursed because I thought the trail was closed — actually, I just had to go to the outdoor exercise equipment and walk to a small path that led to the mountain.

The hike up Yongmasan wasn’t too difficult, though some parts were more dangerous and rugged. There were a few steep slick rocky areas to hike up and down on both mountains — I’m really not sure if it’s easier to hike up or down these rocks.

There were multiple paths along Yongmasan and Achasan, and most of the signs are only in Korean. I found a few in English, but they were in more obvious locations. When I needed to decide which route to take, there was no English to be found. A few times I asked people which way to go — while they didn’t speak English, at least they understood when I said the name of the peak and pointed in one of the directions. Quite a few people seemed to use map apps on their phones–that would’ve been great if I had service, but I hadn’t yet purchased my local SIM card. 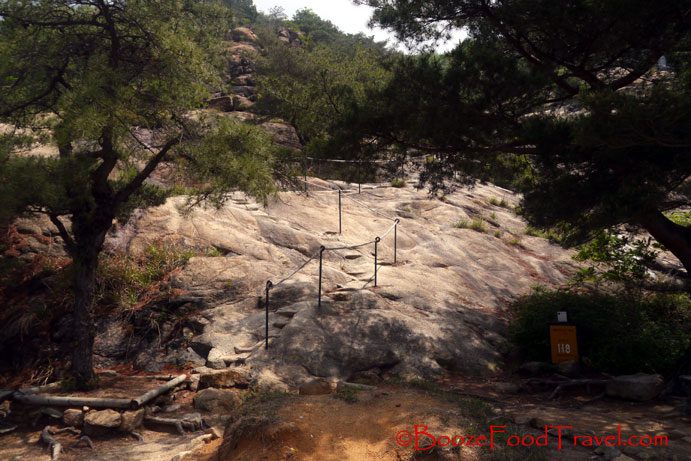 I should’ve been a bit better prepared for the hike. I intended to at least bring a banana and apple to eat along the way, but forgot them at home. I should’ve also brought along a second water bottle.

When I reached the summit of Yongmasan, there were plenty of people picnicking. One guy invited me over for a cup of makgeolli, a cloudy semi-sweet and lightly carbonated liquor. We tried to communicate, but it’s a little difficult without a translator. He managed to point me in the direction of Achasan so I could finish my trek.

As I got closer to the summit of Achasan, I was tired. Seven months without going to the gym has definitely taken its toll. I really just wanted to reach the top and find my way back the city for a decent lunch. There really wasn’t anything different about the view from Achasan as it was from Yongmasan.

Along the way through the hike I passed a few temples and shrines that weren’t of much interest after visiting so many temples around Asia. Along the mountains are the remnants of forts dating back to the Joseon period — I only came across one of them on my trek. There were also quite a few outdoor gyms, with weight benches and everything. It got me thinking about the people who hike a mountain just to get their workout instead of going to the gym.

I followed the crowds either coming up or going down in the hopes that I was heading the right direction. As I exited the park, I followed another group into town because I had no idea which way to go at the intersection.

I ended up a little lost and decided to go into a coffee shop to either use the wifi to check my map or ask directions. Fortunately, one of the employees spoke English and pointed me in the direction of the subway station after I finished my coffee. If I could remember the name and address of that coffee shop, I would send everyone there.