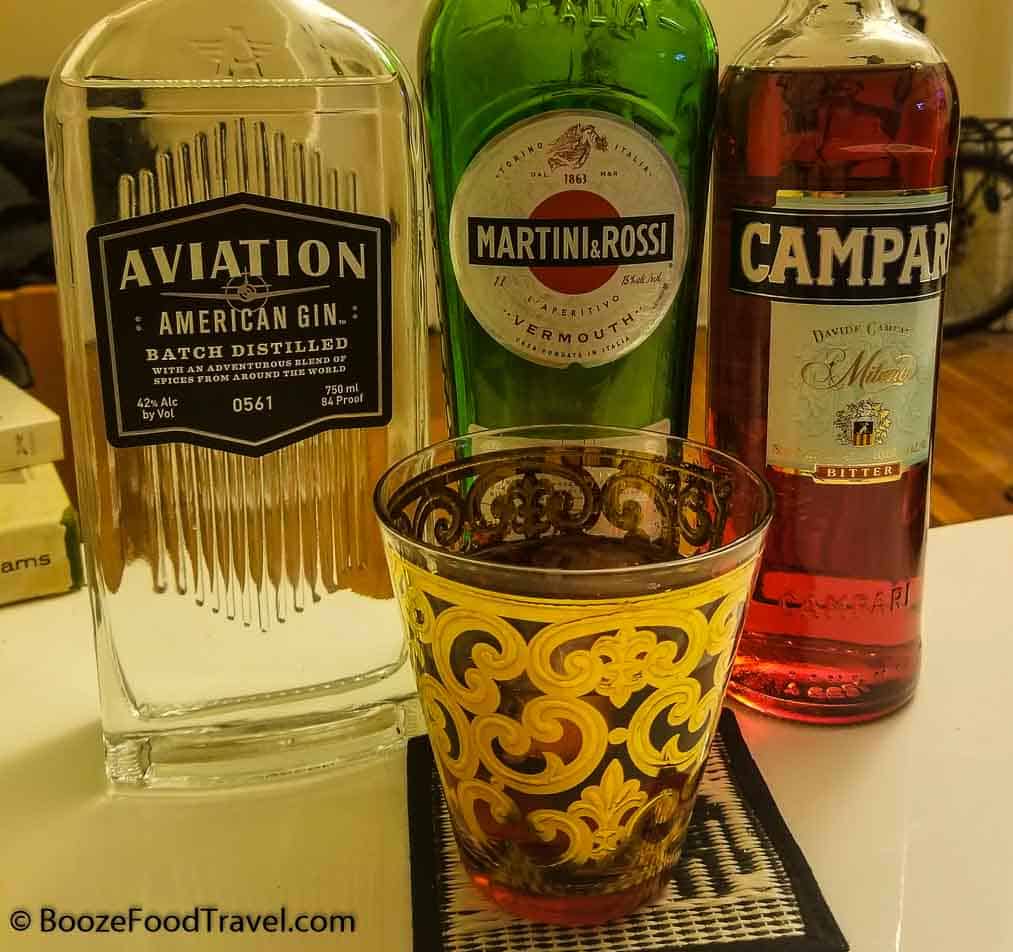 “In troubled times one looked to the shaman or priest for comfort and counsel.
The saxophone wails, the martini glass is drained,
and night like black swansdown settles on the city.”
– John Ashbery, from Hotel Lautréamont

We’ve all been dealing with quarantine in our own ways. Some people have been stress baking while others have picked up new craft hobbies. I have stocked my home bar and started making more cocktails — this is something I haven’t done in a long time due to lack of space and financial resources.

I enjoy making cocktails — it’s a kind of meditative exercise akin to culinary experimentation. The last time I made cocktails at home was when I tried Ghost Coast whiskey with some friends pre-COVID-19. But I haven’t had much of a home bar in years, and the lockdown in New Jersey provided a great opportunity to get started — home delivery from liquor stores and an independent store attached to Costco have helped.

I started out with some simple bourbon cocktails, mostly because I had few bottles of anything else to kick off my stay-at-home order. But as the quarantine and slight reopening in New Jersey dragged on, I ventured into other drink directions. The only spirit I didn’t buy is rum, though that may change if I ever get a mint plant for my kitchen window.

My most common cocktail early on was bourbon neat — I picked up a bottle of Redemption Bourbon on sale from a local store just before the shutdown. I had this some years ago, but forgot how good it is, especially for the price. I also picked up a bottle of High West double rye, which is the smoothest rye I’ve had. And High West is great for making a Manhattan (though I did not have any maraschino cherries) — I remembered how good this rye is from the times I went to the Manhattan Cocktail Classic.

And thanks to author Viet Thanh Nguyen’s Instagram feed for recommending an Algonquin cocktail — rye and dry vermouth with pineapple. I probably didn’t use enough fresh pineapple juice because I ate most of the pineapple before mixing the cocktail. It was still fun to check out Viet’s near-daily cocktails early in quarantine. I’d also highly recommend reading his novel The Sympathizer as it’s one of the best books I’ve read in a long time.

I bought a bottle of joven mezcal in Mexico last year — and it seems that the distillery no longer exists. I had been savoring my bottle of Meteoro, but I needed some new mezcal if I wanted to make cocktails.

The first cocktail I made with my new mezcal was a margarita. This was the first time I’ve ever made a margarita, and it turned out great. It was certainly better because I used mezcal instead of tequila and I used Tajin chili lime salt for the rim for added flavor. 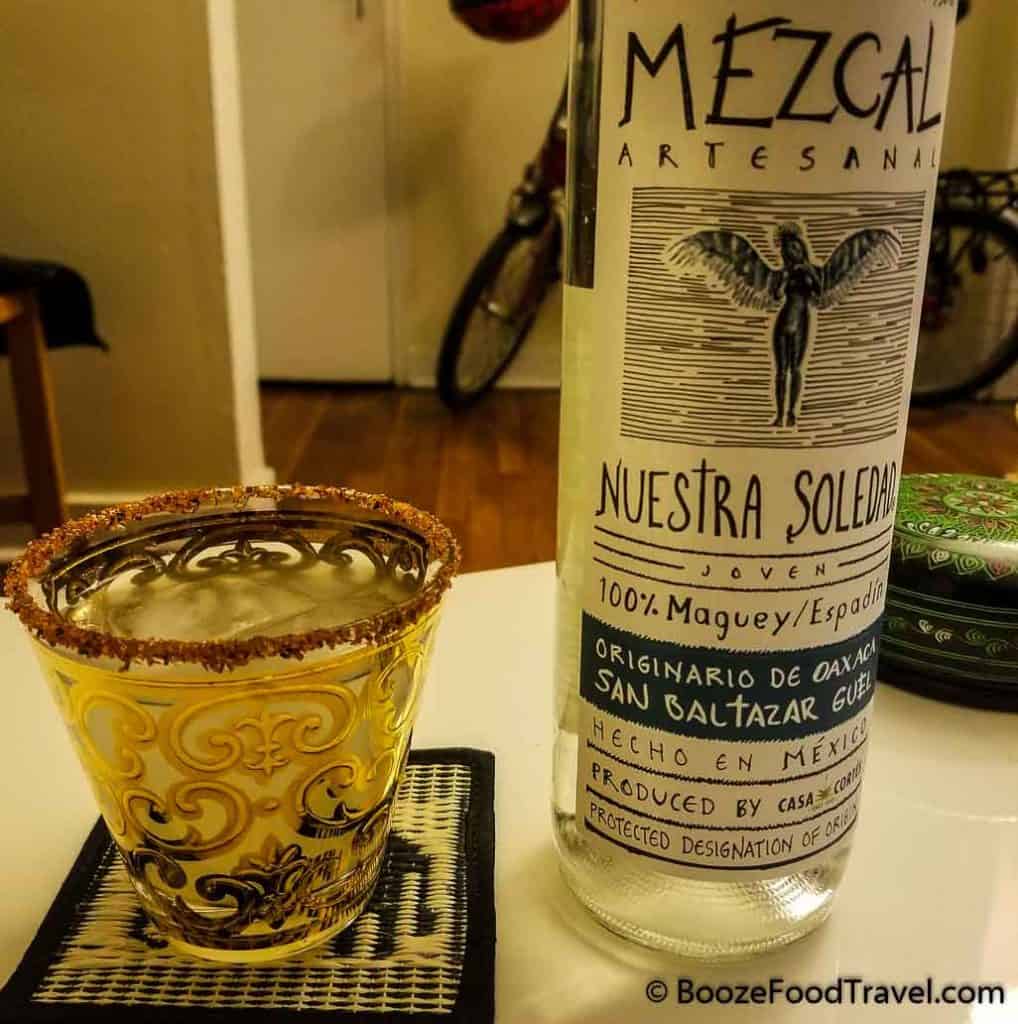 At about the same time I was making margaritas, I got a grocery delivery that was a bit off. A few items were out of stock, so instead of reducing the overall price, Shoprite decided to substitute the cost with about 10 times my order of ginger. I had to figure out what to do with all that ginger, which included making a lot of ginger tea. That’s when I found a new cocktail: Napoleon’s Loss.

Napoleon’s Loss is more or less a mezcal margarita with ginger syrup substituted for simple syrup and triple sec, and lemons instead of limes. There’s also no salt rim. This is a great refreshing cocktail with a bit of a bite thanks to all the ginger.

I think it would be better with agave syrup instead of sugar for the ginger syrup though (I’ll have to try it now that I have agave syrup).

Of course, mezcal gets expensive for cocktails, so I’ve since switched to making margaritas with tequila. It’s not as good, but I still enjoy it. And a margarita is a great cocktail for summer.

I had to make a martini in quarantine — it was the only way could officially call a drink a quarantini. I had been saving my bottle of Fractal vodka, which I bought in Vermont, for an occasion when I could have friends over (wonder when that’ll happen), but I broke down and opened it for a martini instead. Appalachian Gap Distillery’s Fractal vodka is good (and it’s priced similar to Tito’s) — it doesn’t have a bite and even has a subtle sweetness that reminds me of maple.

Despite not having a classic martini glass — my brother may have the one remaining martini glass I had before — I made do my cocktail glass collection. The downside with these glasses is that I can’t stare at the olives in the martini. And these olives are delicious — my local Shoprite has had Lindsey’s harissa olives on sale, and I’ve picked up a few jars. That hint of spiciness makes this quarantini even better. I’m tempted to pick up the spicy olives from the farmer’s market for a stronger flavor.

Enjoying a Negroni or Three

As the weather warmed, I wanted to drink something lighter than bourbon. That’s when I went out to buy some Aviation gin and Campari to make one of my favorite light cocktails — the negroni. I like the balance of herbal bitterness and sweetness, and it’s really easy to make.

I’m not a fan of most gin on its own, which is another reason I like a negroni to mask the juniper. I have had a few good gins (I chalk it up to having the mass-produced stuff as the first tastes) — I enjoyed Ke No Bi from Kyoto, Japan, and Corgi Spirits in Jersey City makes some good ones.

I also attempted a boulevardier cocktail, which is the same as a negroni but with whiskey instead of gin. I wasn’t all that impressed with it — gin fits better with Campari and sweet vermouth.

The most difficult part about making a negroni during a pandemic is getting out to the store to buy oranges to add the peel as a garnish (also my local stores don’t always have the fruit I want when I want it). And now that I have a few more bottles of sweet vermouth, I guess my options are to make more negronis or a few (dozen) Manhattans. 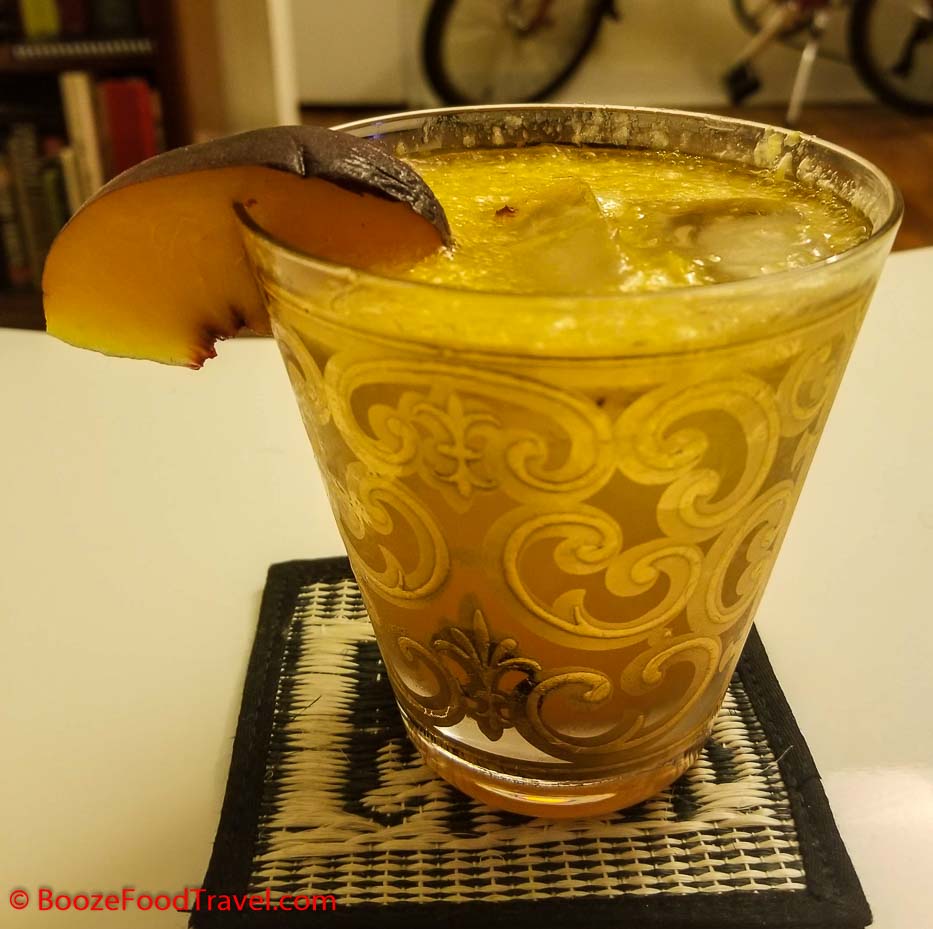 When I got a little bored with making negronis this summer, I found an additional cocktail to make with gin. As I had an overripe peach in the fridge, I made a peach gin fizz. It’s simple: muddled peach, gin, and club soda. It’s a refreshing, sweet summer cocktail.

Some Beer in Quarantine

In addition to the homemade cocktails, I’ve had a decent variety of beer. After my numerous bike rides through Liberty State Park to ward off the COVID 19 (lbs.), I’ve stopped at Departed Soles and the new 902 Brewing for some refreshment to bring home. On occasion, I’ve brought a growler and my growler cooler (both of which I got at a brew pub in Boulder, CO, when I was in grad school when dinosaurs roamed the earth) to Departed Soles because some of their beers aren’t for sale in cans.

I even got a few cans of their Trash Can Banger hazy IPA, which made national news for triggering Astros fans for reminding them that the team cheated. As a Yankees fan, this beer brings extra joy (it helps that it’s a good beer). It’s also “dry hopped with 2017g/bbl of hops!” 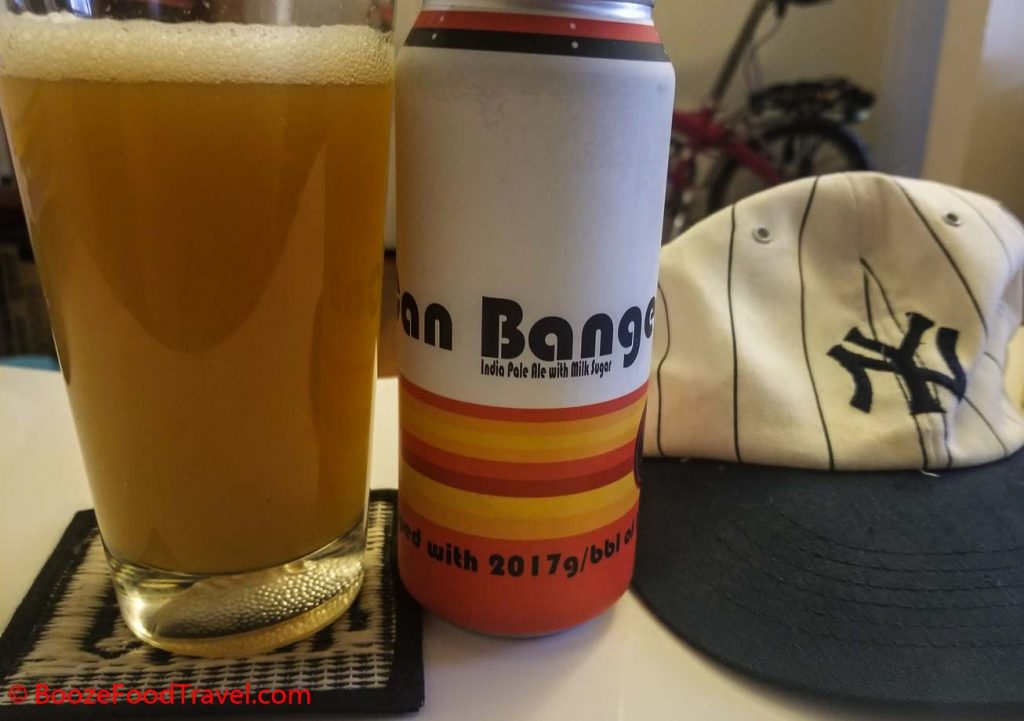 For the most part, I’ve acquired good beers during the semi-quarantine. One exception was Departed Soles’ Secret of the Brews, which is billed as a blue razz sour. I like sours and raspberry, so I thought I’d like this one. This is the second blue beer I’ve had (the first was a Japanese beer I bought in Taiwan that was awful). Secret of the Brews was better than the Japanese beer, but not something I’d buy again. It smelled like those plastic ice pops we had as kids.

After the lockdown was lifted and New Jersey parks reopened, I began stopping at a few breweries after hiking. The best I visited were Chilton Brewing in Long Valley and Four City in Orange, neither of which I had ever heard of before visiting. At the latter, my friend and I ended up spending a lot more on beer to bring home because we were impressed by what we tasted. I would have bought more from Chilton, but they only offered crowlers to go.

There was also a stop at Alementary in Hackensack after hiking the Palisades. I’ve had quite a bit from them before, but they had some new beers to bring home.

It is disappointing that we can’t hang out at bars anymore — I miss talking with bartenders and some customers (or even reading a book at the bar). However, I would rather stay healthy and avoid worsening the COVID-19 situation. I will go to a bar for an outdoor drink as long as the tables are spaced out and there aren’t a lot of people hanging around. But for now, I’m fine with staying home and enjoying a cocktail while talking with friends online.