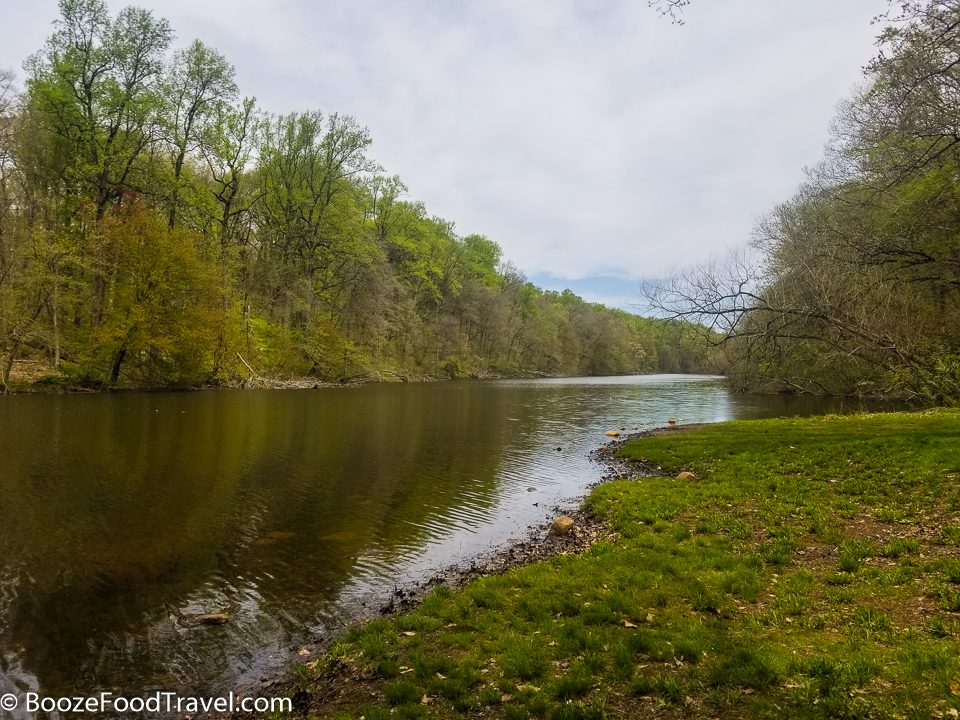 “The geese have their heaven and I have mine,
though both are made of grass and water and both
have sudden subtle bridges where the carved stone
changes color under the presumptive arches”
– Gerald Stern, from Grass and Water

The last few months have been difficult — COVID-19 hit the New York metro area hard and we went into lockdown for a long time. It is a miracle that I didn’t get sick as I was at a crowded beer festival in Brooklyn just as the pandemic was getting serious (and I still took public transportation to work after that for a week before starting to ride my bike to the office). I once thought I had a good-sized apartment. That was before I started working from home and had nowhere to go afterwards.

Living in a city without a nearby park (Lincoln Park isn’t far, but the city closed it because some people couldn’t follow social distancing guidelines) makes the experience of quarantine more difficult. Fortunately, I have a car and the New Jersey government reopened state and county parks on May 2. That was all I needed to get out for a day in nature to re-energize and prepare for another week of working from home.

This is when I feel fortunate to have a car to explore the state’s beautiful parks. I’ve learned over the years that New Jersey parks may not be as plentiful as other states, but they were well worth visiting. Toward the end of last summer, I began exploring a bit more of the Garden State with a friend, but this time around I had to go solo.

On the first day of parks reopening in New Jersey, I took my bike out for a ride through Liberty State Park. That was a mistake.

Liberty State Park was overcrowded. The footbridge to get into the park was much too crowded and traffic going in and out on the roads was heavy. I skipped riding along the waterfront path and headed out along the road back into Jersey City to avoid the crowded bridge. I ended up biking around Jersey City and stopping off at Departed Soles for some beer on the way home.

I’ve since biked more through Liberty State Park, but I’ve avoided the pedestrian bridge and other crowded areas.

After that first attempt at getting out, I took a drive to Watchung Reservation in Mountainside, New Jersey, for a day out of the city. I took a wrong turn that ended up being the right one all along as I parked in the almost-empty parking lot at Watchung Stable. It wasn’t where I intended to start hiking, but it was a great spot for it as it was quiet.

I ran into a few people on the trails just nearby. One such encounter was fortunate as two women asked for directions to the Deserted Village, which forced me to open up GPS. I was willing to talk with the women on the trail as they were courteous enough to put their masks on as soon as they saw me while maintaining social distancing. This was also my first interaction with humans other than distant sidewalk drinks with my neighbors.

We split up on the trails as we reached the main parking lot at Watchung Reservation — this was where I saw more people than I wanted to see. The Loop Playground was full and visitors were driving around in search of open parking spots. This was also where I started seeing people who weren’t wearing masks — and some of those weren’t keeping their distance around others.

Rather than follow the crowd farther along the trails toward the Deserted Village, I headed for other areas that were less traveled. I chose a trail that ran along Lake Surprise and could loop back to the stable. It wasn’t the most scenic lake to walk around, but it was still a pleasant destination after weeks of being inside. I still don’t know what the surprise at the lake is — I asked the guy in the old-school hockey mask carrying a machete, but he didn’t know. 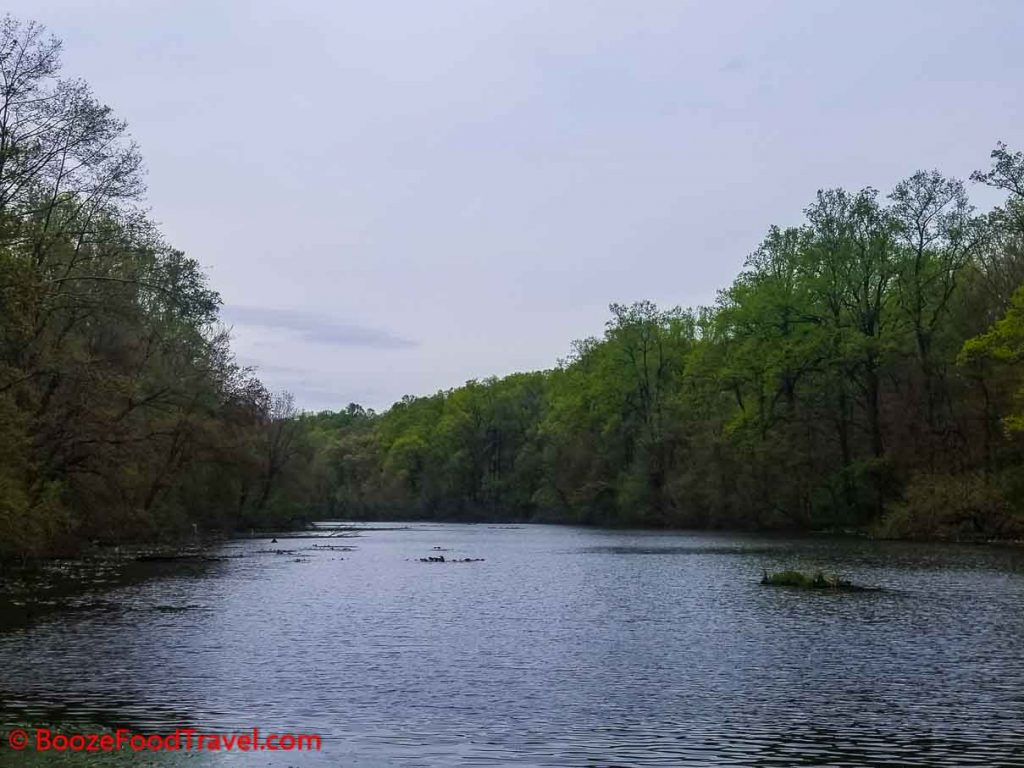 While I didn’t visit the most interesting parts of Watchung Reservation, it was a worthwhile day out — one that has inspired me to return. To top it off, as I returned to my car at the stable parking lot, I ran into the two women I met earlier on the trail. We talked a bit more from across the lot before heading home.

The following weekend I headed out again, this time to Great Swamp National Wildlife Refuge, another New Jersey park that I hadn’t previously visited. It was a beautiful, clear day and the weather was starting to get warm, and my friend agreed to go along (she had been careful during quarantine and we wore masks in the car and along the trails).

The day did not start out as planned — I chose the wrong trailhead. After a brief walk, the trail was too muddy to continue and we turned back to the parking lot. Another hiker in the parking lot suggested driving down the road to some other areas with drier trails, and off we went.

I headed down a gravel road on Pleasant Plains Road through Great Swamp and made a few stops along the way to admire the view — with so few people around, there was no threat of holding up traffic (even if I could only go about 10 mph anyway). There were also a few small parking lots with viewpoints to enjoy.

Unlike the previous trip to Watchung Reservation, there were few people at Great Swamp (or all those people were more spread out). It made for a much more relaxing day in nature. Most of the time was spent wandering the trails around the visitor center — there were a couple short loop trails next to the parking lot that were dry. It was all easy hiking, but it was enough for a day out. 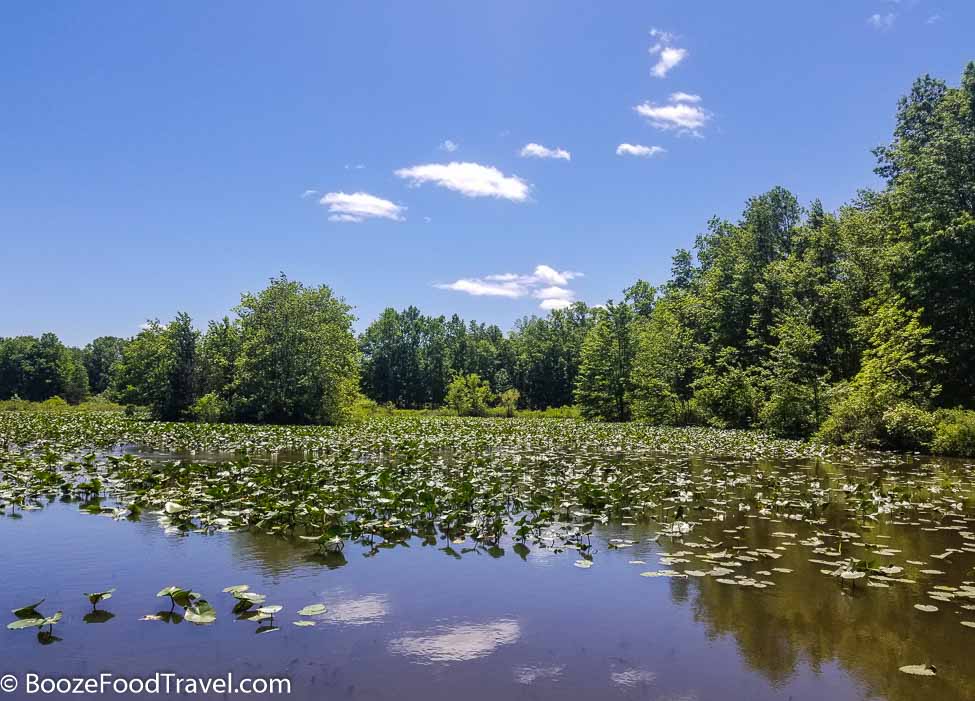 But before departing Great Swamp, we headed across the street to another loop trail that was longer. It snaked through the meadow and into the woods, which provided a lot more shade as it began to get hot.

On the way out, we decided it would be wise to find a restroom — we had been out for hours and the restrooms in the national park were closed. The best option we found was a grocery store along the route home. Sure enough, the restrooms at grocery stores remained opened and made the drive home much more comfortable. Since then, at least New Jersey state and county parks that have facilities have opened them to the public. 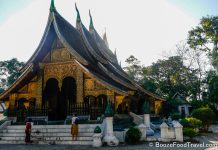