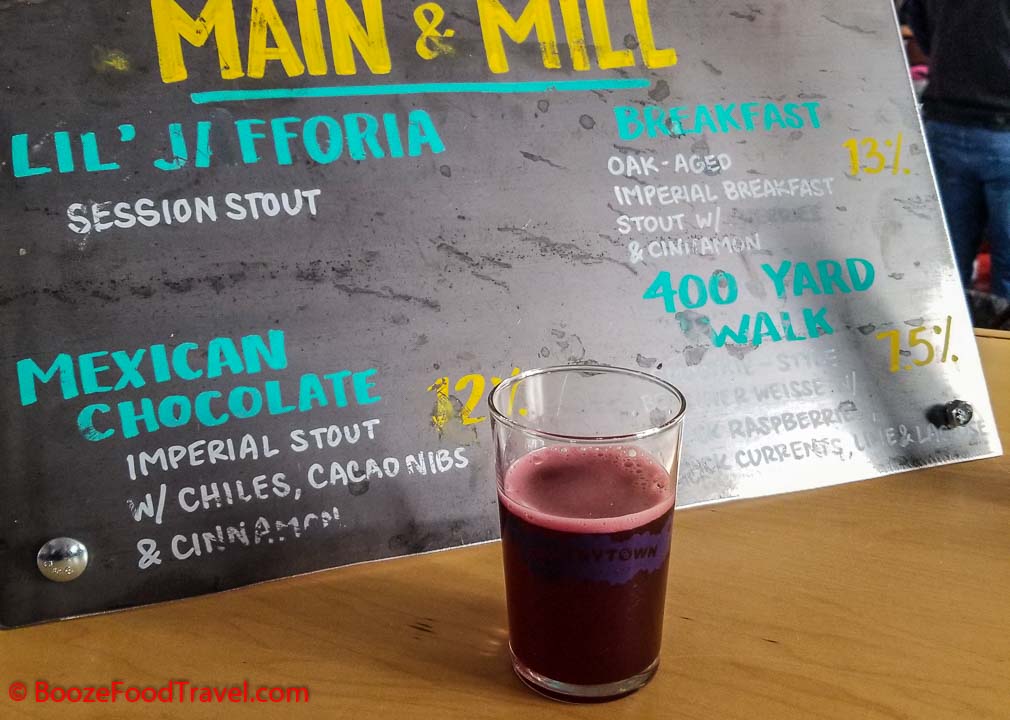 I was drinking my sixth beer — a delicious barrel aged imperial stout from Trillium — and on line to get my next when I pondered the choice to indulge in these high-ABV dessert-focused beers for four hours on a Saturday afternoon in Brooklyn. I had dumped out a fair amount of the previous beers, not because I didn’t enjoy them but because I knew that if I drank all that I was given, I wouldn’t make it to the second hour of PastryTown, the beer festival in Industry City organized by Other Half Brewery.

After learning about PastryTown last year from my friend, I decided it was a good idea to check out this decadent beer festival that isn’t far from home. I was hesitant to attend as entrance was $100, but I’d say I got my money’s worth.

This beer festival featured more than 40 independent brewers, quite a few of which I cannot get in New Jersey. Judging by similar beers available nearby, many of the beers I had at PastryTown would sell for $14-20 per four-pack, meaning $100 for a ticket wasn’t outrageous.

The day also included amateur wrestling with a bunch of people dressed as Hulk Hogan and Macho Man Randy Savage, among others. I didn’t bother to watch any of it because I was too busy going from line to line to try more beer after spilling out yet another good brew.

Most of the beers at the festival were imperial stouts — it was a welcome variety as there haven’t been a lot of dark beers at the bars lately. There were also a fair amount of fruited and sour beers, which was good for variety. The only problem I had was that many of the stouts were brewed with coconut, and I’m not a fan of strong coconut flavor.

As PastryTown was held on the weekend that COVID-19 began to spread in the US, there were some concerns. While no one practiced social distancing (it’s kind of difficult with such a crowd), organizers made attempts to improve hygiene. All staff and brewery representatives serving beer wore gloves and there were a lot of hand sanitizer stations at almost every turn. There was also plenty of bottled water instead of water fountains to reduce contact. Knowing what we know now, the event should’ve been canceled.

Brooklyn Brewery’s Black Ops ice luge probably wasn’t the best idea, but most people filled up their glasses rather than drink directly from the ice (I took mine straight from the glass).

Two of the best breweries I tried were Moksa and Hudson Valley (other breweries had excellent beer, but these two were best overall). Moksa out of Rocklin, CA, had three terrific strong beers (I skipped the lager) — I thought ¡Salud! was a great stout with hazelnut and vanilla, and then I tried their barrel-aged Mostra 5th and it was even better. The Lush was another good choice, but not as good by comparison. Hudson Valley brought a little more variety with sour ales that included Graven Image, which was sweet and sour with a lot of lime (and maybe some salt). I’ll admit that it was an odd flavor, but it was definitely worth a try. Their Holy Icon was another interesting entry as it is a sour IPA — I liked it more than Graven Image and I’d try it again to see whether it lives up to memory.

The one thing I missed out on at PastryTown was the timed-release beers. These were special beers that were limited to only being on offer at specific times. As expected, any such brews attracted long lines that I didn’t feel like waiting on. My time was better spent tasting at least 40 beers (I may have had a few others that I forgot to include on Untappd).

The day’s award for most innovative beer would have to go to Brooklyn Brewery for WD-50 Donut Oil, which is a mix of Black Ops & OH Snowbirds (I don’t know that one) with whipped cream and fennel pollen. It was weird and wrong — an abomination of beer — but so right as a shot.

Other beers that stood out throughout the day included Other Half Brewing Tiramasu (a pastry stout brewed for the event), HOMES Brewery Cynosure (a raspberry and passionfruit sour IPA that was delicious), Southern Grist barrel-aged Vanillionaire (packs a punch with a lot of vanilla), Main & Mill 400 Yard Walk (this beer tasted like a sour milkshake — in the best possible sense), and Trillium barrel aged double coconut coffee cake (while I’m not a fan of coconut beer, Trillium gets it right by balancing the flavors).

There were plenty of other fantastic beers throughout the day, and I had a great time talking with some of the brewers — the guy at Weldwerks from Greely, CO, knows my grad school classmate who owns Rowdy Mermaid kombucha in Boulder. I also tasted a few beers that I thought were mediocre. Some were just not my style while others were a bit bland.

Would I do it again? Maybe. It’s an expensive trip to Brooklyn, and it’s crowded. But it’s also a lot of beer I wouldn’t otherwise try. More importantly, after trying so many strong beers, particularly stouts with strong flavors, it becomes difficult to differentiate each one — even with some water in between each one, it all blends together after a while.