What’s the one thing everyone does in Bagan? Watch the sunrise over the pagodas.

Plenty of people go for the sunrise balloon ride over Bagan, and I admit that I wanted to do the same. That is, until I saw the price tag. $350 per person. And those are US dollars, not Canadian or Australian. I had planned on splurging on this trip (up until the point that I realized I couldn’t get any more cash), but there was no way I could justify that expense.

If it had been $100, I would’ve taken it (assuming I could’ve put it on my credit card or actually used an ATM in Myanmar). Instead, I settled for watching the hot air balloons float above the temples as the sun broke through the dust and haze of the morning.

And the view I found in Bagan was not the one I had planned.

On my second day in Bagan, I ended up at a large pagoda off the main road — it was past another slightly larger one, but no one seemed to visit this one. The view from the top of the pagoda was beautiful. I made up my mind to head there for sunrise — it was near New Bagan, so it wouldn’t require a long ride and I could quickly return to the hotel for breakfast and a nap.

I forgot where the pagoda was. I couldn’t find it in the predawn darkness.

I met a German tourist on a bike while searching. We came across one temple with people on the roof, but we couldn’t find the stairs up; we were confused how the group made it up. We went to a large pagoda nearby, but the upper levels were locked — the German guy climbed around the barbed wire fence to go higher, but I decided to turn back.

I headed for Myauk Guni (North Guni) where I had watched the sunset the day before. It was just past Shwesandaw Pagoda, which is where a large group of tourists stops for sunrise and sunset. By comparison, Myauk Guni only has a handful of people and the view is just as good.

Rather than taking a 15-minute bike ride to watch the sunrise, I had to ride more than a half hour. And I was fortunate enough to make it to Myauk Guni just before daylight broke. But it sure made the ride back to the hotel on an empty stomach more difficult. 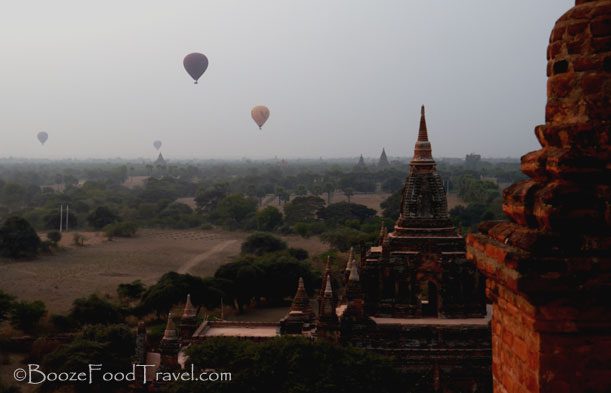 Unfortunately, I don’t have the best luck when it comes to sunrise views — my sunrise over Angkor Wat was rather disappointing. Bagan was better than Angkor Wat, but it wasn’t clear enough for the more impressive photos I’ve seen.

This is the downside to Myanmar opening up more to foreign investment and tourism. As more tourists flood the main attractions, the views will become more obscured. Fortunately, locals emphasize keeping Bagan clean and promote the use of electric bikes, bicycles, and good old mule cart to control pollution. However, that doesn’t stop larger tours with buses and people hiring taxis or renting cars. Because the roads aren’t paved, and many are entirely sand, the increased traffic simply sends more dust into the air. Even the mule carts kick up plenty of dirt on the roads.

At least with the lack of traffic the air around Bagan is still decent. The sunrises and sunsets may get a bit hazy, but they’re still beautiful and well worth seeing.

Is a sunrise balloon ride worth the money or is it better to take the less expensive dirt road?