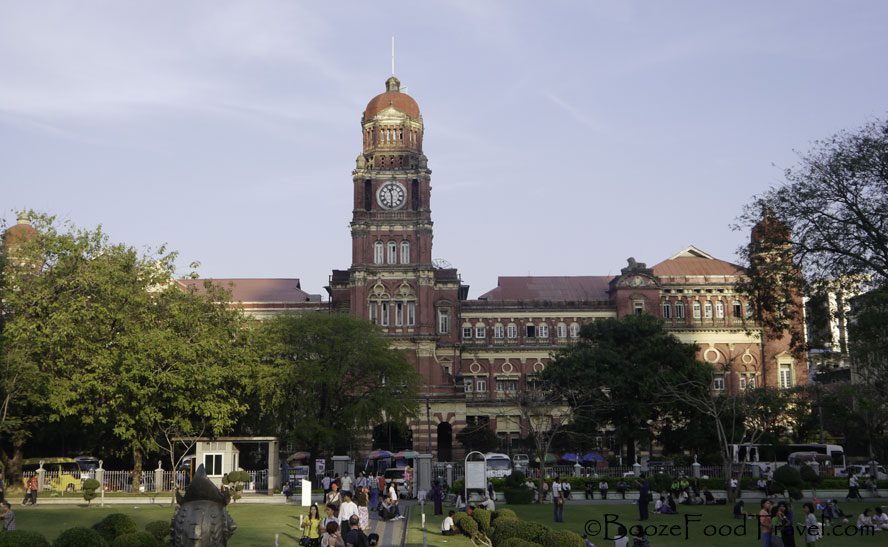 “You can’t get a suit of armour and a rubber chicken just like that. You have to plan ahead.”
– Michael Palin

I booked my flight and first night in the hotel and got my eVisa in order. I was ready for my week in Myanmar. But I hadn’t planned anything. I had read a few articles with advice about traveling through the country, but most of them were at least a year old. This is a rapidly developing country due to regional investment interest, so things should be better than they were a year ago.

I should skip the travel advice columns and go with my gut next time. I should’ve used Anthony Bourdain’s trip to Myanmar as a model — there was little in the way of infrastructure when he visited. But in my naive perception, I thought infrastructure had improved since then.

I pictured luxury overnight buses that I could sleep on while saving money on a hotel as I traveled between destinations. And ATMs — oh, the ATMs would be everywhere. And those same ATMs would dispense local currency and work with my new American bank card with that fancy chip (my Taiwanese bank card doesn’t work anywhere outside of Taiwan).

What a fool I had been. Those luxury buses were sold out in advance due to the Chinese New Year holiday and all its travelers, as were the trains unless I wanted to book a hard seat for the 18-hour journey. Those ATMs didn’t work with my new card either because those signs for MasterCard were false, the ATMs didn’t have enough money, or my bank claimed I didn’t tell them my travel plans for which I have a confirmation email (yeah, screw you Capital One and MasterCard). (I even met a fellow traveler with the same bank and same problems. I also met some Europeans who had problems with the ATMs.)

So, what were my options? How could I continue what was supposed to be an inspiring and relaxing holiday away from work and still ensure that I could make it back to Yangon to catch my flight back to Taipei so I could return to work?

First problem I ran into was that I had to book a flight from Yangon to Bagan, which meant I also needed an extra day at the hotel (the hotel I had already booked didn’t have available rooms the day before, so I needed a different one at the last minute). Both the flight and hotel had to be paid in cash (flight in USD, hotel in kyat). When I got to the hotel, they allowed me to pay the next day when I could exchange more USD for kyat at the little business around the corner that gave absolutely awful exchange rates and wouldn’t exchange more than $50 (I exchanged the rest of my cash at a bank that opened later in the day — I had to beg the clerk to help me because they weren’t supposed to exchange money at the time).

After that, I tried a few more ATMs with no success. I was left with $160 worth of kyat and five more days in Myanmar. And no one in Myanmar will exchange Taiwan dollars — as a friend told me, “It’s the black sheep of currencies.”

I had to make a quick decision for my remaining time in Myanmar. Despite my desire to see Inle Lake, I thought it more prudent to stay in Bagan. I could find another hotel that would accept credit cards and then hope to book a flight back to Yangon the day before my flight back to Taipei.

I counted my money and made a budget:

I had plenty left over and used the extra to pay for my daily expenses. Anything left on the last day would be used for splurging on a nicer food, drinks, and souvenirs/gifts.

I was fortunate enough to have invested in two things for this trip: 1) a local SIM card that I overpaid for because I bought it immediately at the airport, and 2) a new mini laptop for travel. The second item helped out much more in saving my skin and vacation. But the SIM helped when I got lost and needed Google Maps or when my bike or ebike broke down and I needed to call for help (though locals always stopped to assist me).

I’m sure I could’ve booked hotels and flights on the phone, but the service in Mynamar is slow and limited (I had only 120MB of data to use). It was a little easier working with the slow hotel wi-fi on the laptop to search for flights and hotels. Of course, some of the domestic airline websites don’t actually work or won’t allow users to actually book tickets.

I managed to find ONE hotel that was $100 per night and accepted credit cards, but it was on the other side of New Bagan from my hotel (I could’ve stayed in Old Bagan or Nyaung U, but that would’ve required paying for a taxi and going against my budget for the remaining cash). Unfortunately, I couldn’t find any flights to Yangon on the day before my flight, and I found only one that arrived a few hours before my flight out and required a stop in Heho (I prayed the flights were at least close to on time). I’ll admit, I panicked a little when I was forced to book that flight. On the bright side, that freed up 20,000 kyat in taxi fares.

Once everything was booked, I began to relax. Alright, I’ll admit it, it took an extra day of riding a rented bike around Bagan and talking with other tourists to truly calm me down so I could enjoy my extended stay in the land of ancient temples.

In fact, getting “stuck” in Bagan was quite possibly the best thing that could’ve happened.

I took one day to just wander around New Bagan — roaming the dusty streets to watch the lives of locals. A few came out to greet me, but it was mostly just children shouting and waving to me as I snapped photos of the exquisitely constructed bamboo houses–the perfect angles and extensions out from the main structure made them beautiful. I even found a housing development created from shipping containers. And the day ended with watching the sunset over the Irrawaddy River with only a handful of other quiet tourists.

I was able to take an additional day of biking around the historic sites of Bagan. I even made some friends along the way who joined me for meals and temple exploration (and one who waited around with me to have my ebike fixed on the first day).

The pace of having the additional days in Bagan was the most relaxing vacation I’ve had in a long time. And because I over-budgeted, I was able to buy plenty of souvenirs and gifts. I had planned on have two dinners on the last night, but my fancier-than-other-restaurants-in-town dinner was far bigger than expected. Instead, I ended up with a beer in a more locals-friendly restaurant while everyone watched European soccer.

After hearing stories from people who only spent two days in Bagan, I realized how fortunate I was. On my way out of Myanmar, I met an expat who told me Bagan is probably the best possible place to get stuck on a trip through the country.

And because I didn’t see Inle Lake or even Mandalay, I have more reason to take another trip to Myanmar. Well, for that and the food…and the wonderful people.

Have you ever had your travel plans fall flat? How did you handle it?