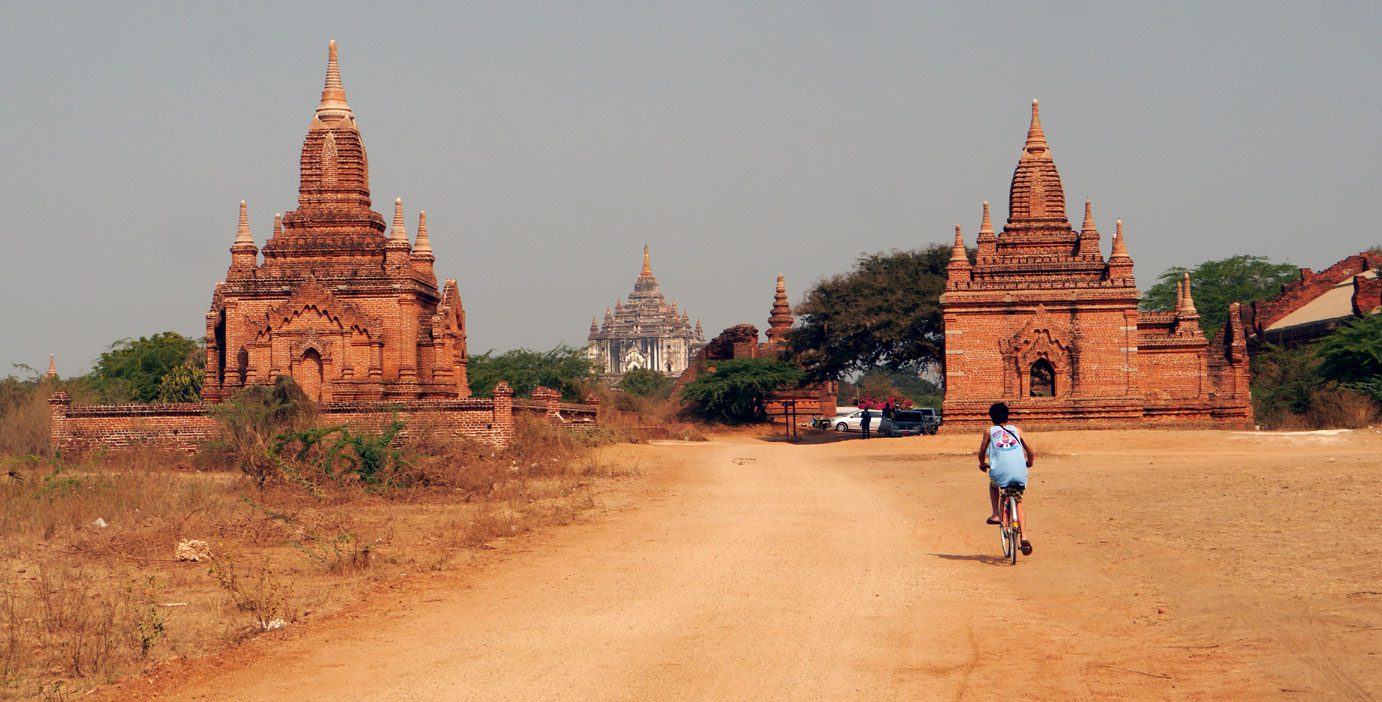 You fools who ask what god is
should ask what life is instead.
– Ko Un, Asking the Way

Most people see Bagan in a day or two while on tours through Myanmar. Due to my careless monetary planning (and bank foul-ups), I got five days in the land of pagodas.

On my first day, I rented an e-bike as I had to take a long ride to find the bank that supposedly would exchange my US dollars or possibly accept my debit card (there was another branch closer to the hotel that I didn’t see until my final day). That day I learned just what the tour books meant by bumpy roads in Myanmar. I thought about how people use GoPro cameras and what an adventure the ride through the dusty streets of Bagan would be to watch. Alas, I have no such camera nor any device to mount a camera on  a bike. 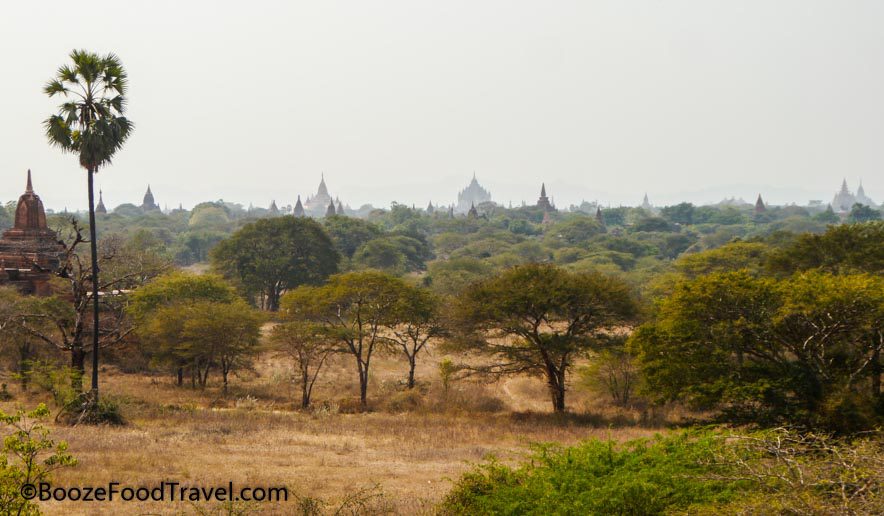 After breaking down far from my destination after taking a wrong turn on one of the four main roads in Bagan, I found the Nyaung U Airport Hotel. The friendly staff helped call the people I rented from to come fix the e-bike — they also offered me a place to rest and some water. 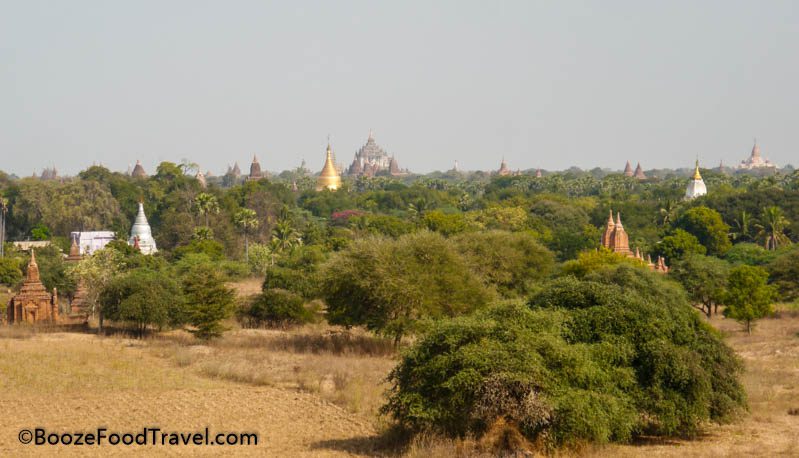 Later in the day, I met Erin, an American living in Ireland who was on an extended journey through Asia. She had similar banking problems as I had. She also chatted with me while I waited again for help with my broken-down e-bike. After I was ready to go again, we headed around to find a spot for sunset. As we ran low on time, we stopped at the first pagoda with stairs to a terrace for slightly obstructed view.

For the next two days I rented mountain bikes, which were quite a bit easier to ride through the sand-paved roads that branched off those four main roads toward the pagodas and villages. I turned down whichever path that passed for a road caught my attention, sometimes with beautiful results. 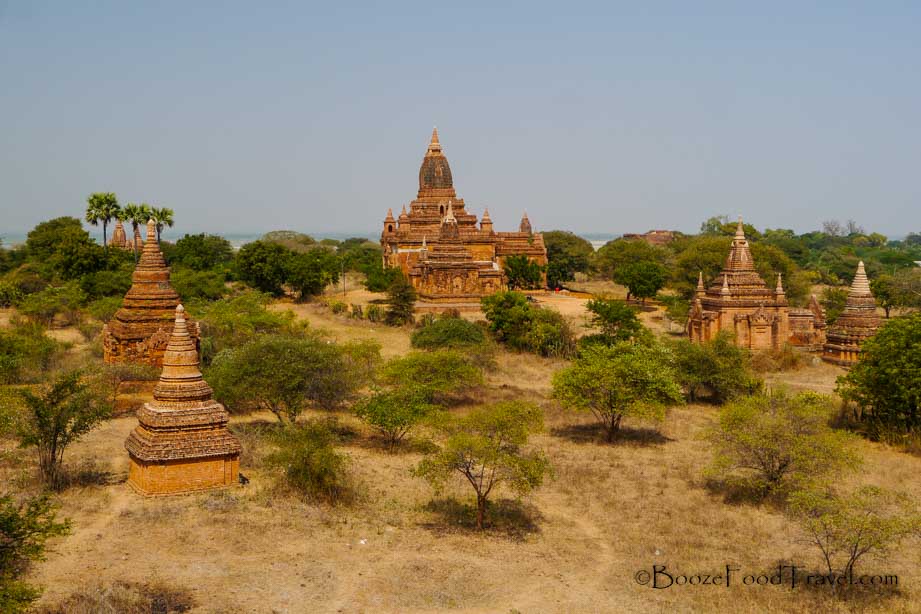 I headed out early in the day to avoid the intense midday heat, along with the crowds, though I usually stayed out well past lunch to see a bit more. I rode out again to watch the sunset from various points in the area (my favorite was from a restaurant at the end of Kayay St. overlooking the Irrawaddy River in New Bagan, probably because it was the clearest sunset of my stay as well as the least crowded). 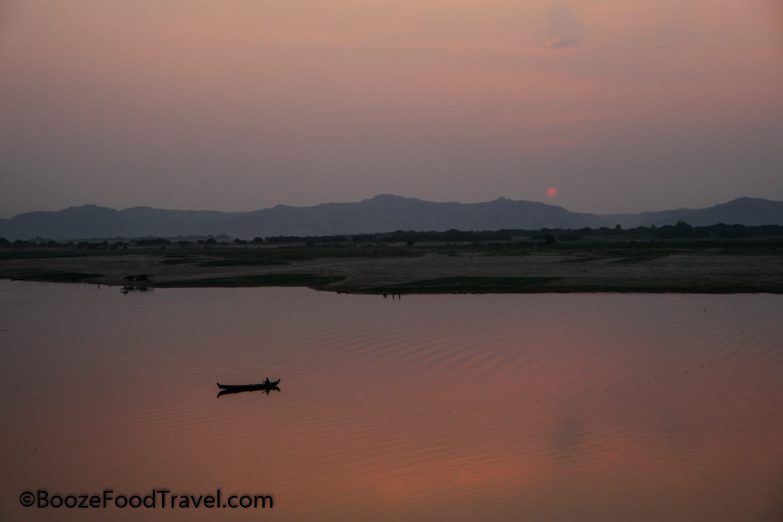 I avoided riding bikes much after sunset as the streets are poorly lit within the towns, even with my bike light that I was grateful to have remembered to pack as bike rentals do not include such necessities for nighttime riding. Even walking at night wasn’t the easiest and required me to carry that little LED light as a safety precaution.

It’s easy to fall in love with Myanmar while riding a bike — the moderate pace in the heat as the sun gleams off the ancient pagodas, making them appear golden, brightens the spirit no matter how difficult the situation may be (or even if you’ve managed to screw up your travel plans). The expanse of the plain with the endless pagodas is as beautiful as any scene I’ve witnessed in my travels, and finding the quiet perches atop some of the less visited pagodas only improves the view.

Just like the e-bike I managed to break down, but only once after sunset when I got a flat tire and the front wheel locked up — it was only a ten-minute ride back to my hotel, but I couldn’t even walk the bike back with a locked wheel. Fortunately, multiple locals stopped to help me out — one tried to fix the bike, another called the people I rented from, and two more offered help that I no longer needed (I couldn’t imagine people anywhere else being more friendly and helpful).

On my first day of biking around with an aimless agenda, I took turns onto the sandy roads leading away from the sparse tourist crowds. At one pagoda, a family showed me the food they were preparing for breakfast — they even invited me to join them in a little while. I had just finished a huge hotel breakfast not long before, and I wasn’t sure about cleanliness of food prepared along the road, so I politely declined. I was, however, tempted by the spicy sauce they prepared.

As I rode toward what I thought were interesting non-pagoda structures, I encountered a new friend on a solo bike ride through Bagan. Klara, who runs a tour organization in Prague (Prague Extravaganza Free Tour), joined me for the rest of the day on our dusty journey through pagodas and vistas.

If it wasn’t for Klara, I might not have known how to get to Myuk Guni and reach the top terrace to watch the sun. She led the way for sunset, which became my alternate destination for sunrise the following day.

We rode around Bagan aimlessly — through various streets and paths, occasionally walking the bikes through the soft, deep sand. We had time to see everything that wasn’t on the official tours, though we still stopped at the larger temples.

We parted ways after our sunset view with other tourists at Myuk Guni. It wasn’t until my final day in Bagan that I ran into Klara again — I was riding an e-bike past the market on the way back from Nyaung U when I spotted her on a bike in the opposite direction. I shouted her name to get her attention. We ended up having lunch at a vegetarian restaurant in the market before she had to head back to the airport.

We shared adventures from the previous two days — the advantage of digital cameras. When I mentioned bringing something back to share with my coworkers, she suggested buying a huge bag of tamarind wafers that handed out everywhere in Myanmar (how could I go wrong with such a simple gift?).

The rest of my time in Bagan was spent semi-aimless riding with stops at nearly every pagoda I came across. I met plenty of tourists who wandered through some pagodas with me, but none who seemed to be headed in the same direction afterwards.

I didn’t mind riding alone through the sand of the town — it provided time to reflect on my travels and take in the atmosphere at my own pace. It’s the same with hiking — quiet contemplation and the ability to go faster or slower depending solely on my mood. I was able to ride down whichever side streets I wanted and admire the construction of the local bamboo houses, as well as get lost in the aisles of the Nyaung U market as I searched for souvenirs with my leftover kyat on the final day.

On my final day of biking (I rented the e-bike on the last day in Myanmar because I was too tired), I ended my day with a stop at an open-air restaurant just on the edge of New Bagan at the opposite side of the town from my hotel. At this point I was just looking to relax with a cold beer — I wanted to try Mandalay Beer, but almost all the restaurants in town only served Myanmar Beer. The owner of this restaurant went out to get a bottle of Mandalay Beer for me. It was a fitting end to all of my biking through Bagan.