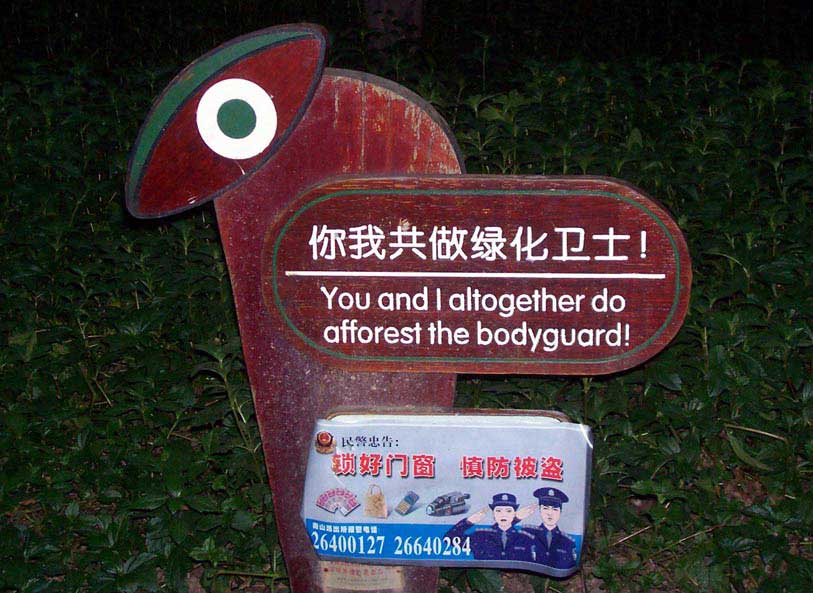 Whether it’s about an official government sign or just a restaurant menu, everyone who has been to China has stories of Chinglish. Having lived in China for almost four years, I saw many examples of mangled English–on street signs, billboards, storefronts, and menus.

For tourists, these Chinglish signs are generally amusing and occasionally confusing. For expats, they can still be amusing, but some find such signs annoying. For locals, Chinglish either evokes embarrassment or verbal defense of the mangled language; after all, if English is an ever-evolving language that borrows from others, why can’t the Chinese add their own characteristics to it?

In the run up to the 2008 Olympics, Beijing attempted to “fix” Chinglish in the city. The same happened in Shanghai before the World Expo, and in Shenzhen before the University Games. There have also been smaller campaigns to eradicate Chinglish from the Middle Kingdom. However, it has lived on. I never found Chinglish annoying, though I saw a few examples that were more than a little confusing. When I taught at a training center in Shenzhen, two of my students tried explaining Chinglish and then thoroughly confused me with some common expressions and semi-literal translations. I still have a Chinese textbook that contains Chinglish translations to help students remember the Chinese grammar (it helped a little).

Occasionally, I discovered a sign or menu item that made little sense but flowed so poetically that I had to memorize it (or take a picture of it). Unfortunately, I always left my camera elsewhere when I found a Chinglish menu, so I don’t have a picture of my first poetic menu from a restaurant in Yangshuo that served “Yellow cooks in a covered vessel the beer chicken.” Now, to add to the poetry, I would have added a comma after vessel, but that’s just my poetic license.

Signs of Amusement in Japan