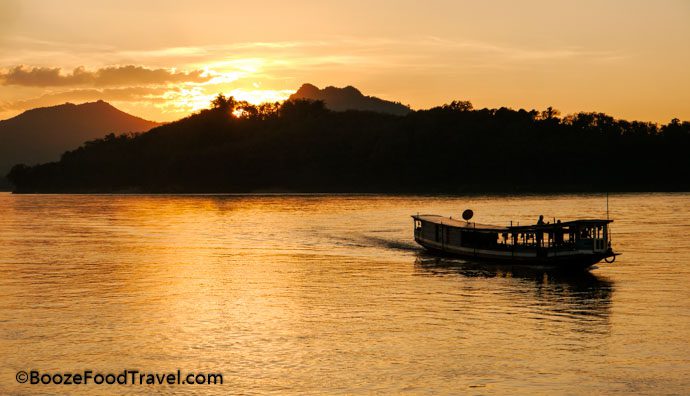 Even with all the natural scenery, temples, culture, and food, what I’ll probably remember most about my short trip through Laos is the sunset. Or maybe I should say sunsets, as I watched many from various spots. And all of those were Mekong sunsets because the Mekong River snakes its way south from Luang Prabang to the capital Vientiane before heading into Cambodia and Vietnam. 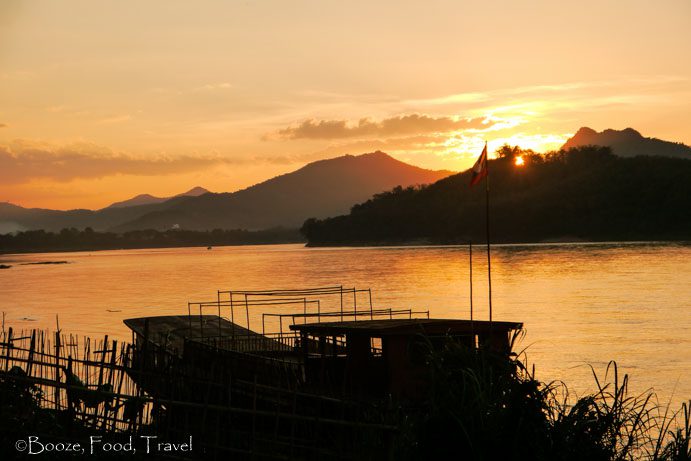 This means that every sunset I watched in Laos was a Mekong sunset.

Unfortunately, the sunsets in Vientiane were not nearly as beautiful as those in Luang Prabang. There wasn’t a great spot from which to watch. The best I found within the city was from a bar called Bor Pen Nyang, which is open air on the fourth floor overlooking the Mekong River and night market. Like most bars in Laos, it’s for foreigners. I’d prefer a cheaper beer with my view, but this place was at least worth stopping in early just to watch the sunset.

I found it even more interesting to watch the night market vendors set up and the people to flow into the park along the riverside. Although on one day I saw a few people paragliding over the river with huge fans strapped to their backs, which certainly made the sunset more interesting. 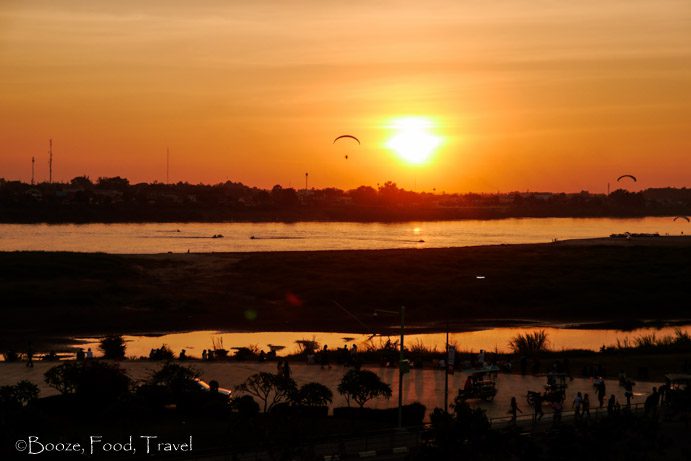 In Luang Prabang, the difficulty is in finding a spot with the right angle for the sun along the Mekong River. Google Maps has a couple places marked for sunsets, one of which is along Khem Kong (the street that runs alongside the river). The other spot is across a bamboo bridge over the confluence of the Mekong and Nam Khan rivers at the peninsula; unfortunately, there’s a 10,000 kip toll for crossing the bamboo bridge.

There are also more than a dozen restaurants along the riverside that are more popular for the sunset. However, many of them have obstructed views. As I wasn’t hungry that early, I skipped eating at those restaurants and wandered in search of a better location for photos. 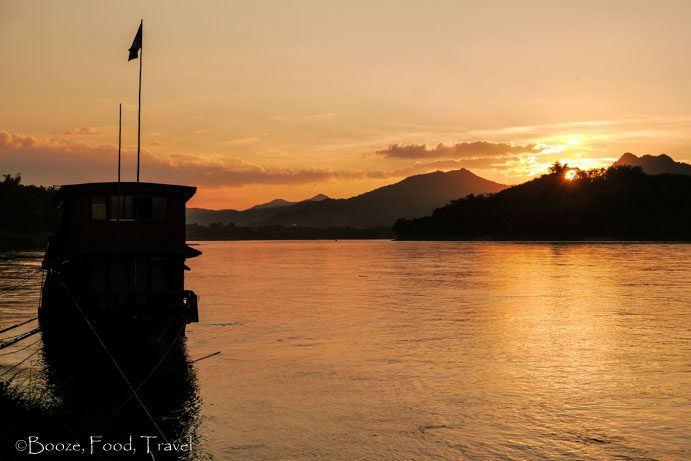 I managed to find a spot leading to a makeshift pier that was almost deserted at sunset (there was a German couple talking to a guide). While the best spots would be higher up from the river, they were obscured by trees. But closer to the river’s edge provided me with less obstructed views. The boats along the Mekong River gave my photos a little more life. I tried to get a photo of the Laotian flag fluttering in the wind, but the setting sun made it too dark from this angle.

One other option that I didn’t attempt for sunset views is a hike to the peak of Mt. Phou Si. The trees at the top of this small hill also don’t allow for a completely clear view. Hiking up for sunset would also require a flashlight. Plus, after being out in the sun all day and waking up early each morning, I didn’t have much energy for even a short hike. Instead, I took my hike up Mt. Phou Si in mid-morning, which provided me with some hazy views of the region.

It didn’t matter where I got to see the sunset because it was still beautiful. Too often I’ve visited cities only to see hazy sunsets and sunrises, usually due to pollution. In Bagan, my sunrise photos weren’t all that clear because the crowds kicked up so much sand along the roads that it blocked the sky. Laos hasn’t reached the point of pollution or even just sand affecting the scenery. Of course, similar to at Borobudur, the sunrises (and early mornings) appear hazy because of the humid mist that hangs around the mountains — it’s beautiful to watch the clouds clear throughout the morning though.

Where is your favorite destination to watch the sunset?