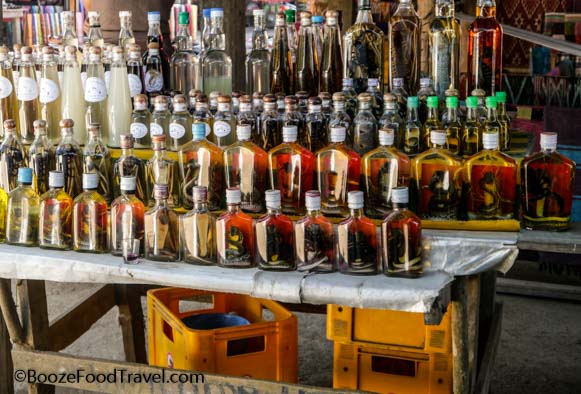 Laos has been known as a haven for partying backpackers. The country tried to curb this distinction by regulating one of the backpacker-favorite activities of tubing down the river through Vang Vieng (a town I didn’t get a chance to stop in) and making stops for cheap drinks. The party town has seen multiple tourist deaths every year and the government has shut down some bars in the area. Despite changes, there are still many tourists who flood the town for the renowned parties.

I wasn’t visiting Laos for the parties. And yes, I realize that makes me sound old, but I prefer not to sleep through a day because of a hangover. Sure, I wanted to try some local drinks and check out the bar scene, but I had little interest in getting drunk.

I had already been introduced to Beerlao, the national beer and one of the largest companies in the country. I didn’t realize that they also used to produce “33” Export and Bière Larue, which I had in Vietnam. Lao Brewery Company claims that it holds a 99% share of the beer market in Laos. But I did find some other beers to try while wandering around.

The first new beer for me was Beerlao Dark, which is a dark lager. It’s still light, which is great when the weather is as hot as in Laos, but it still has enough flavor to be satisfying — this was my beer of choice while traveling, though it is more expensive than other local beers and usually only sold in 12 oz. bottles. There’s also the “premium” Beerlao Gold, which really tastes no different from the usual Beerlao but costs a couple thousand more kip per 12 oz. bottle. On the lower end of spectrum was Namkhong beer from Lao Brewery. This was definitely the least appealing beer in the country, and it was also the cheapest. 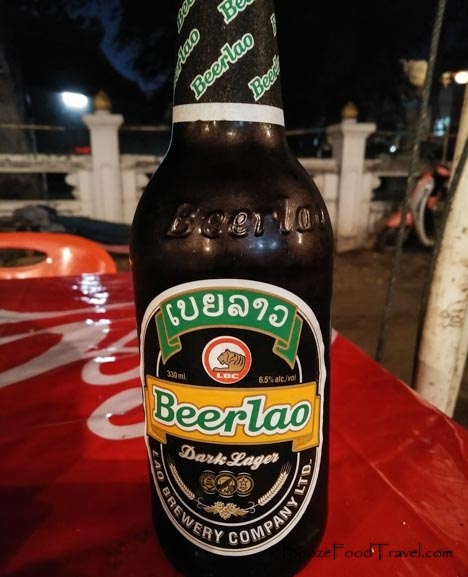 The beer is great to enjoy with a view at some of the bars and restaurants or while grabbing some barbecue along the street (the grilled fish was my favorite).

There isn’t a lot of sightseeing to do in Vientiane, which gave me more time to relax with a beer. A must-visit bar in the city is Bor Pen Nyang, which is really best for the sunset views. Other than that, I wasn’t interested in the place — it seemed like an expat/tourist spot to get loaded on drinks that were more expensive than elsewhere in the city. But it was still worth a second trip for more sunset photos.

I also tried one other bar, Samlo Pub, not far from my hotel. It was a larger bar with a pool table, but it wasn’t lively. I met an expat who lived in northern Thailand who said that a lot of foreigners cross the border to renew their visas and get a slight change of scenery. This bar is apparently popular with that crowd.

The most impressive place I had a drink was Laodi. I stopped in to this bar in a converted shipping container because I was familiar with the brand. It’s a type of flavored rum like I had in Cambodia, except I had tried Laodi in Tokyo at a farmer’s market in Yoyogi Park — the owner of the company is Japanese. This organic spirit is distilled with only local ingredients, and the flavor is wonderful. The only downside to drinking there is that it is significantly more expensive than having drinks anywhere else in Laos. If I hadn’t been traveling with only carry-on luggage, I probably would’ve bought a bottle to take with me.

As most of the rum is rather sweet, I ordered the brown rum, which is similar to spiced rum that most people are used to, with a splash of soda. 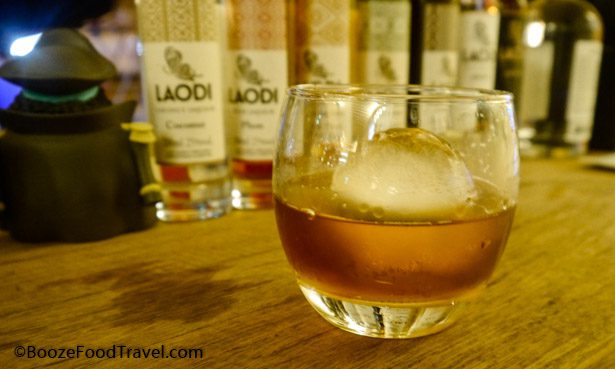 On my final night in the Vientiane before heading to Luang Prabang, I grabbed a beer at the convenience store and wandered around. I came across a group of locals drinking outside their business. As the business catered to travelers, I assumed they spoke English (a few of them did). It provided me with an opportunity to learn about life in the city. It was also a chance for them to learn about an American living in Taiwan.

The town itself is more touristy. It feels like no one actually lives in town — almost every building is a hotel, restaurant, or souvenir shop/travel agency. Therefore, the drinks in town are more expensive than in Vientiane. Even in the beer in convenience stores was at least 2,000 kip more.

The first place I stopped was Dexter Cafe & Bar, a fairly new cocktail bar that preserves some of the French colonial style in its decor. I took a look upstairs because I wanted to have a view of the main street through Luang Prabang as I drank, but it wasn’t open air like the area downstairs. Of course, downstairs there are only two tables outside on the sidewalk.

I had to try the signature cocktail — there weren’t any other bars that had such a thing (that I noticed anyway). The Dexter Lover cocktail was what I expected in Laos — a refreshing tropical drink that wasn’t overpowering. It’s made with white rum, triple sec, banana liqueur, grenadine, orange, and lime — not my usual choices for a cocktail, but it was worth a try despite the 50,000 kip price tag (beer was usually 8,000-12,000).

The most popular place to drink in the touristy town is Utopia, an open air bar overlooking the Namkhan River. It’s a bit of an adventure to get to the bar as it’s down some winding sidestreets that are only wide enough for pedestrians and bikes. The adventure of getting to the bar was fun.

In the afternoon, most patrons take their drinks to the lounge area to relax with the view–I must admit that it’s a great idea to allow customers to just lounge around like this. As those areas were full when I arrived, I took a seat in the garden area that is decorated with unexploded bombs, which is technically illegal in Laos as the government doesn’t want people scavenging for metal from potentially dangerous UXOs. Ignoring the fact that the decor is possibly illegal, Utopia is a cool place to grab a beer, and it’s one of the few places that stays open fairly late (although I didn’t stay out late because I wanted to go sightseeing early in the morning). 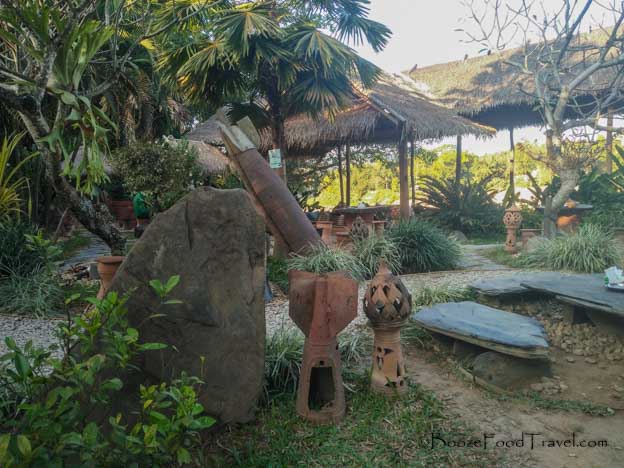 My favorite place to grab a drink though was at an unnamed restaurant — I suppose it had a name in Lao, but there was no Romanized version. It was at the western end of Khem Khong along the Mekong River. The restaurant sat on the edge of the cliff overlooking the river — it was great for sunset, though the views were obscured by the trees.  Nonetheless, it was friendly, inexpensive, and quiet. The creaky wood floor made it feel even better. Plus, I was the only foreigner there.

And then there’s the “whiskey”…

On my overpriced tour of Pak Ou cave and Kuang Si waterfalls, we had a stop in what is called the Whiskey Village. Really, this is like just about any other village, except it’s a tourist stop for souvenirs. Most of the vendors in the village sell some type of local liquor, usually distilled from rice, sugarcane, or other crop.

Of course, there are also special souvenir bottles that have intricately posed creatures inside fermenting with the liquor. The most popular of these are the snake and scorpion liquors, but there are also lizards and other insects. Even if I had been traveling with checked baggage, I would not have bought a bottle of any of these as a souvenir (not even sure if it’s allowed through customs).

I tried a few of these liquors at the vendor in front of my tour van. None of them were anything that I’d consider drinking. At least the rice liquor was a little sweet and didn’t leave me feeling sick after a sip. Other ones reminded me of cheap Chinese baijiu, though they probably weren’t made with sorghum.

Have you had any drinks in Laos? What were your favorite drinks and bars?