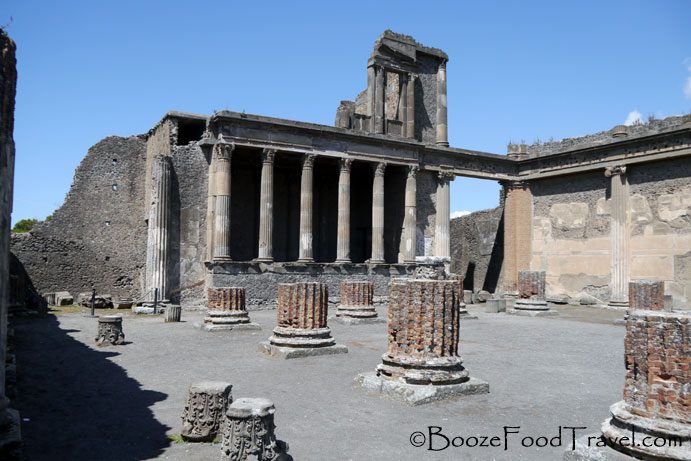 Remember when I said that all the ruins in Rome start to look the same? Well, the same can be said about Pompeii.

On the advice of my friend from grad school, I told my parents that we should find a tour of Pompeii. It would be more organized and we’d get to see the Herculaneum on a full-day tour. Then we discovered that the full-day tours are only available twice a week, neither day was one that we were in Sorrento. We settled on the the half-day tour to just see Pompeii. 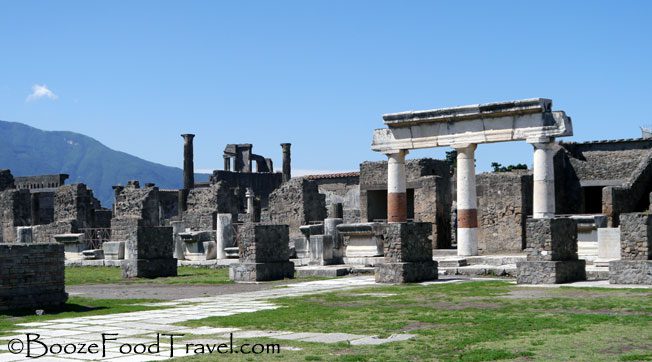 We figured it was worth the price just to avoid riding the Circumvesuviana again. Even the Italians believe this train is a piece of shit. It took almost an hour and a half from Naples to Sorrento along 30 stops on this privately-run train that was probably constructed by Mussolini and still uses the same cars with no air conditioning. The New York City subway looked better in the early 1980s. Yes, I got spoiled by the amazing trains in Japan, Taiwan, and Korea.

Instead of watching the wasteland pass by on the Circumvesuviana, we saw the coastline from the comfort of a tour bus. Our guide was friendly and humorous–he even made a point of telling us to not buy any souvenirs other than books. I didn’t bother buying anything, unless you count the free map at the entrance.

The portion of Pompeii that is open to tourists is large and only accounts for a small part of what was once a thriving city. Due to a lack of funds and local interest, the rest of Pompeii remains unearthed, but there have been promises made that sometime in the future excavations will resume (probably when the Circumvesuviana is replaced by something more modern like a donkey cart).

Most of Pompeii is streets lined with what used to be shops and homes that are all more or less in the same state of ruin. There are few, if any, identifying features remaining in any of them. “And this here is a what used to be some sort of business. Over here is the same thing. Etc.” The first one was nice, the second was curious because it was so similar, and then it turned to boredom. That is, until we arrived at the brothel.

Our guide pointed out the slightly visible ancient Roman penis in the sidewalk that pointed visitors in the direction of the brothel district, which today is the most intact portion of the ruins of Pompeii. It’s such a popular destination that every tour stops there and has to wait for the tour ahead to move along before entering.

In Pompeii’s red light district, visitors can see the original stone bed used by prostitutes that still retains its crabs and syphilis (Mt. Vesuvius must have had a part in the preservation). Inside the brothel are frescoes that depict which sexual act was performed in each room (they had to cater to the illiterates among the population).

Throughout the hot day we encountered many more historic ruins that pretty much looked the same. A few of the temples and the amphitheater stood out, as did the forum. Aside from the brothel, the public bath was also fairly well preserved, proving that the Romans had their priorities in safeguarding particular aspects of society from certain destruction.

The roads still have large stones that served as crosswalks so residents wouldn’t have to walk through the sewer that was the street. These same stones had gaps that allowed carts to freely maneuver through the waste. I suppose because the people only bathed once every few months, the stench from their roads/sewers wasn’t noticeable.

I knew Pompeii was a thriving trade center in ancient Rome, but did know just how large the city was. I also didn’t know that prior to the eruption of Mt. Vesuvius, the sea was right next to the city (it’s now miles away). Fortunately, with the clear weather, it’s easy to still see the volcano that buried the city almost 2,000 years ago.

Toward the end of the tour, we passed the gated section of Pompeii that houses artifacts, including the preserved bodies that most of us have seen in history books or National Geographic. With exhaustion from the intense sun setting in and the crowds gathered around, I only took a brief glance at what I thought would be better displayed. I had incorrectly thought that the artifacts and preserved residents would be displayed throughout the ruins of Pompeii. It’s not the first time I’ve been wrong, and I’m sure it won’t be the last.

All jokes aside, Pompeii was an impressive half day out of Sorrento. It would’ve been better with a full-day tour though.

Have you visited Pompeii? Have you ever seen a more impressive prostitution district?