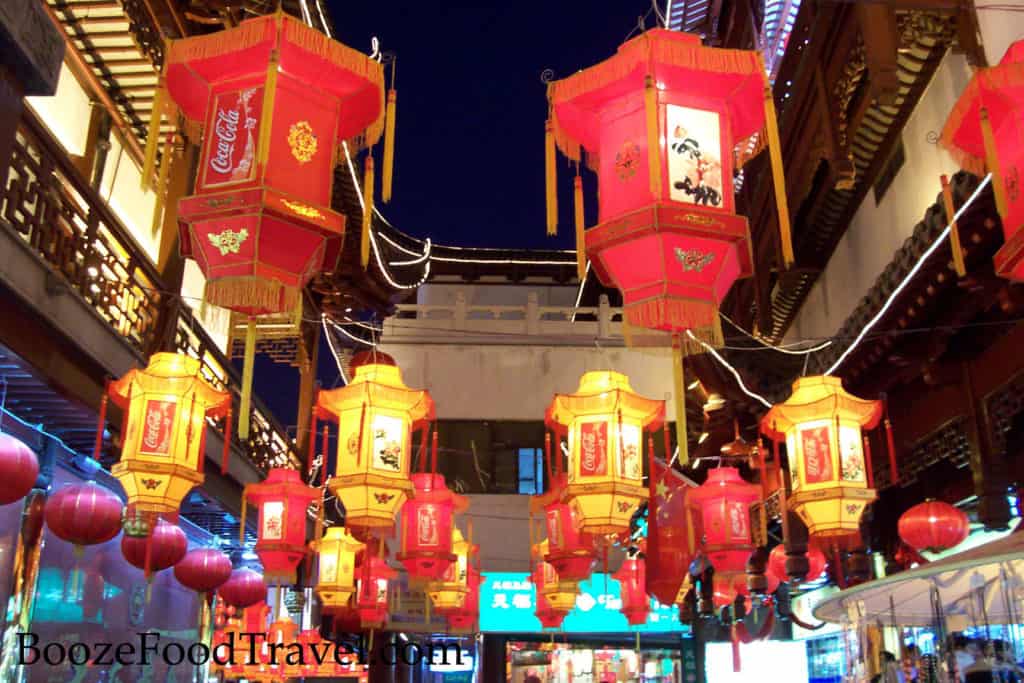 We sit together, the mountain and me,
until only the mountain remains.
– Li Po, translated by Sam Hamill, “Zazen on Ching-t’ing Mountain”

Tonight begins the celebrations for the Lunar New Year in much of Asia, bringing in the year of the dog.

The last Year of the Dog was 2006, and it was my first encounter with Chinese New Year celebrations. I had only been in China a few months when the holiday rolled around–I had a month off from work to travel and enjoy myself with the little money I had earned (I was paid about $700 per month with a free apartment).

I took a trip with my girlfriend at the time. She planned everything because I knew little beyond Beijing, Shanghai, and Xi’an. Our Spring Festival trip would take us to Guilin and Yangshuo and then on Shanghai. After seeing pictures of the landscape in Yangshuo, I was excited to set out on my first big trip in China.

I ended up with a surprise when we landed in Guilin. We were picked up by officials from the People’s Liberation Army. I knew we were getting some sort of special treatment while on this trip as my girlfriend’s aunt had connections, but I didn’t expect to get driven around by the Red Army. They were equally surprised to see a foreigner upon arrival.

We stayed at a government hotel in a rather run down part of the city, far from the tourist attractions. They even gave us a private dining room in which we ate with the soldier who was tasked with driving us around each day.

After a long boat ride down the Li River to Yangshuo, we decided to stay overnight in the scenic town. We convinced our driver to stay in town rather than drive to Guilin and back to Yangshuo in the morning. Because his superiors weren’t with us, he was allowed to have some fun, which meant we could take him out for beer after sightseeing.

On the final night, we had a banquet dinner with an army official (possibly a general). He offered me the choice of drinking beer or local liquor during dinner. Obviously, I chose the liquor, mostly because I thought it was what the official wanted and I didn’t want to offend him. It was a type of rice wine–it wasn’t nearly as harsh as baijiu and had a slightly sweet flavor. We finished off two bottles during dinner. 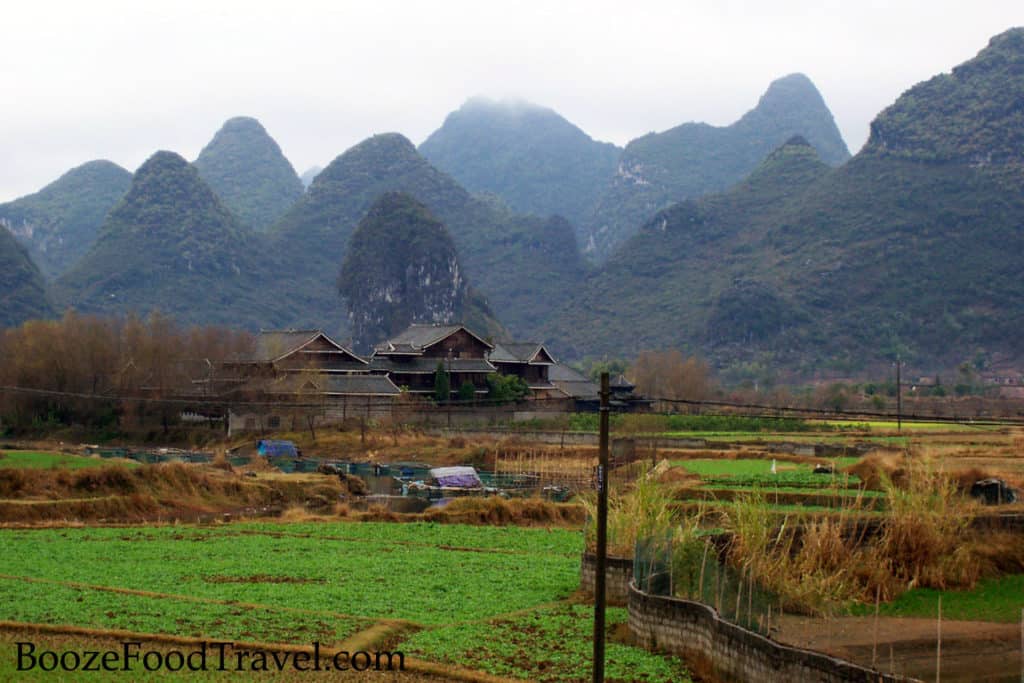 I remember dinner clearly, though at that time I had difficulty identifying any of the food. I recall having conversations in English and attempting to speak Mandarin. Then I got up from the table and my memories disappeared. I’m told I was speaking Mandarin fluently as we left the restaurant. I’m also told that I invited our driver out for more drinks. And I promptly passed out on the sofa when we returned to the hotel.

Shanghai involved a lot less alcohol. But there was also no government tour.

The official Chinese New Year began a few days after we arrived in the city. She had relatives in Shanghai who took us around for a few days and invited us to their home for a traditional New Year dinner. We had the traditional fish and dumplings as well as countless other dishes. Plus there was beer and baijiu.

In between courses, we watched the Chinese New Year TV performances–there were comedy acts, musical numbers, and acrobatics that included a child putting his foot in his mouth (or was that the baijiu causing hallucinations). Sometime during the program Dashan (the foreigner all other foreigners in China get compared to) made an appearance.

After hours of eating and drinking, we took a break to play mahjong. They were kind enough to teach me how to play. They were also impressed I was able to pick up the game quickly and actually win a couple rounds. Don’t ask me how to play now as I’d need to go over the rules again.

As we played mahjong, fireworks began erupting around the city. I was curious and peered out the window to see where it was. My girlfriend’s relatives laughed and said I needed to wait for midnight. They were right.

Shanghai erupted in fireworks from every corner. They were exploding right next to the apartment buildings. It was beautiful and chaotic.

At this time, my girlfriend’s relatives decided it was time to set off their own fireworks. It was rounds of firecrackers wrapped around bamboo poles. They were sticking the pole out each window to ward off spirits and welcome the Year of the Dog. I even got my turn at shoving the bamboo pole with firecrackers out a window. 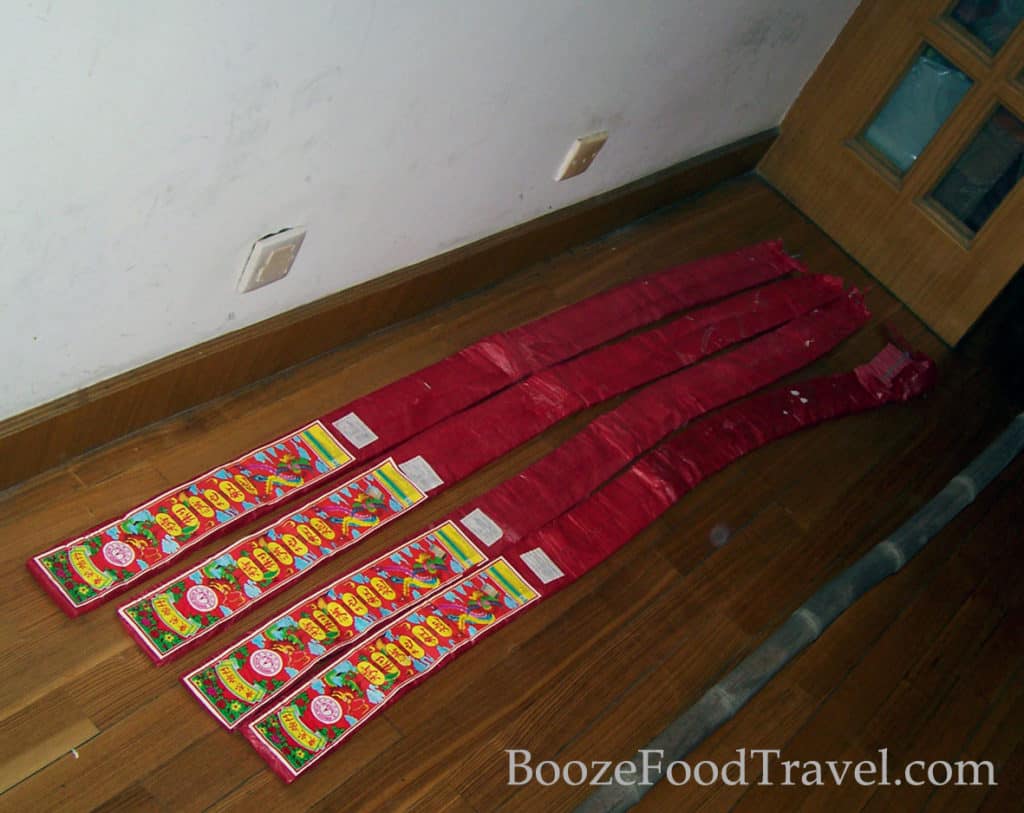 After finishing with our fireworks, we drove out to a nearby temple. People paid a lot of money to be inside the temple at midnight to pray, but the rest were out in the crowded streets with their offerings. Everyone was praying for the new year with incense in hand. The fire department was there to take all discarded candles and incense to extinguish in the gutters.

When I returned to my hotel, with fireworks still being set off around Shanghai, I wandered around the neighborhood a bit. Debris from the firecrackers was everywhere–the sidewalks were covered in red, as were some cars. 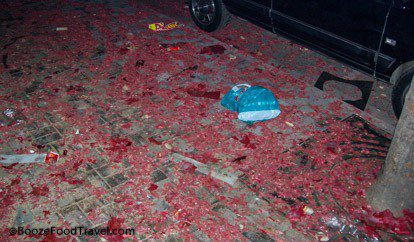 I attempted to sleep with the fireworks in the distance. It was an exciting introduction to the Chinese New Year festivities, and I knew I’d never experience anything like it again.

Freezing into the New Year in Montreal