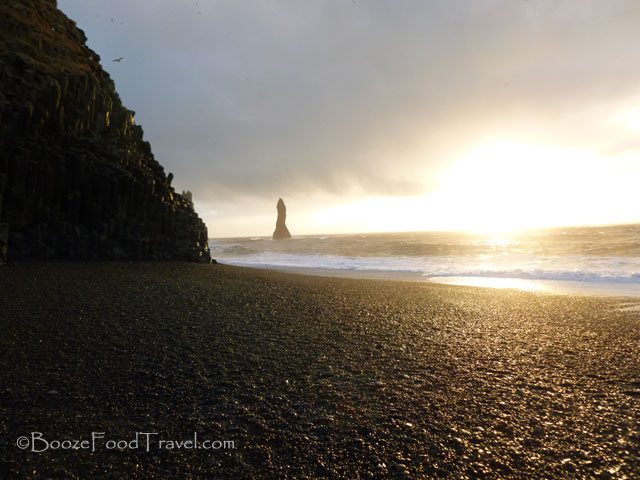 On the same tour that I saw Skogafoss, I also spent a few hours in the village of Vik on the southern coast of Iceland and enjoyed the nearby beach Reynisfjara. This town of about 300 people was the main reason I chose the tour. I originally wanted to spend a day or two in Vik, but the weather forecast didn’t look good and I opted for the tour instead. Despite some sporadic rain, the tour was great — and the sun peeked through the clouds when we arrived in Vik.

The church is the highest point in town and considered the only safe place in the event of a massive flood that the people have been expecting for a long time. When (not if) Katla erupts, it will melt the Mýrdalsjökull glacier, flooding the entire town. Residents regularly practice emergency evacuations to the church in preparation. Fortunately, Katla stayed quiet while I visited.

The town is known for its black lava beach Reynisfjara, basalt sea stacks, and the Reynisdrangar, which are three rocky spires in the Atlantic Ocean. The basalt sea stacks on the beach didn’t even look real.

The waves on the beach were huge, and the tour group was warned not to get caught — a few people got a bit close when standing in front of the basalt stacks. We spent a while taking photos on that beach full of pebbles before heading into the village for lunch — it was my first taste of the traditional Icelandic lamb soup (it was delicious).

After lunch, it was time for more walking along the beach (there really isn’t much else in Vik). It was quiet peaceful, and I regret not spending a full day or two relaxing in the village.