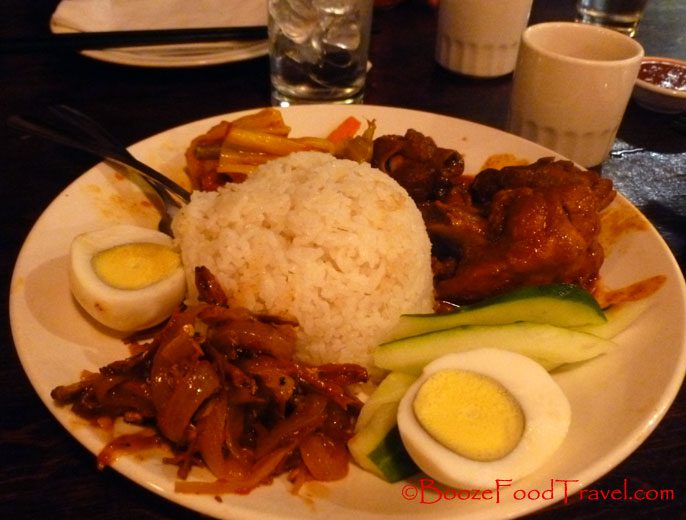 Before heading to Boston, I asked a coworker to recommend some restaurants, and he gave me a decent list. Through my own searches, I found even more places to try. Unfortunately, I didn’t even make a dent in that list (just another reason to head back to Boston).

One of the top places I had to stop at was jm Curley, which is just off Boston Common on Temple Place. It’s a trendy bar with a nice beer selection and some interesting items on the menu. I almost ordered the braised rabbit pizza, but I decided to instead try the “Mc Rib” bahn mi. It was a sandwich made with wild boar, ginger bbq sauce, pickled carrots and other veggies, and spicy fish sauce mayo. All those flavors combined into a beautiful harmony (did I mention this is by the Theatre District?). 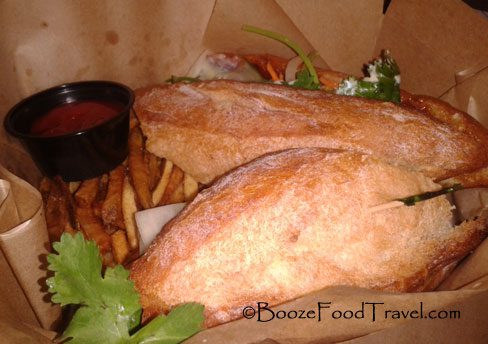 My dessert is served on a what?

Now, I’m not much for dessert, but I couldn’t pass up what was on jm Curley’s menu. How can anyone pass up a foie gras glazed jelly donut? It was covered in basil crystals and filled with strawberry-rhubarb jelly. Unlike other donuts, the dough was not sweet, so you could taste all the flavors. It was better than I expected, but I probably wouldn’t spend $6 on another.

After my tour of Harvard, I headed to Mr. Bartley’s, a little no-frills burger joint that’s been around for about 50 years. My friend from the hostel and I were fortunate to get a seat at the long table–as we left we noticed a long line outside. While waiting for our burgers, we were entertained by the odd collection of signs, bumper stickers, and posters covering the walls–there is no theme, just a bit of humor.

I definitely think the Michelle Obama burger was a good choice–cajun spices and blue cheese tempted me into ordering it. It’s definitely in contention for one of the best burgers I’ve had. 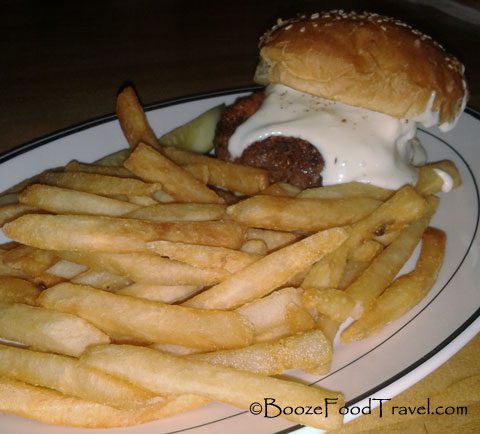 On the way back from a long tour around Boston, I noticed some large Chinese characters on the side of a food truck: 羊肉串. I turned my travel companion for the day and said with delight, “Yang rou chuan! We have to go!” And those lamb skewers were as good as I remember from China. All that was missing were some plastic stools and cold Tsingtao (my China expat readers will understand).

And because I was staying in Chinatown, I had to try a restaurant around the corner from the hostel. It wasn’t Chinese though. I had dinner at Penang, a busy Malaysian restaurant. The extensive menu made it a bit difficult to choose a meal, but I settled on the Malaysian staple of nasi lemak, and I wasn’t disappointed. It was quite a bit of food, but I do regret not ordering more just for the joy of eating Malaysian food.

I also had a lobster roll while walking the Freedom Trail, but it wasn’t all that impressive. I probably should’ve stopped at one of the recommended seafood restaurants instead.