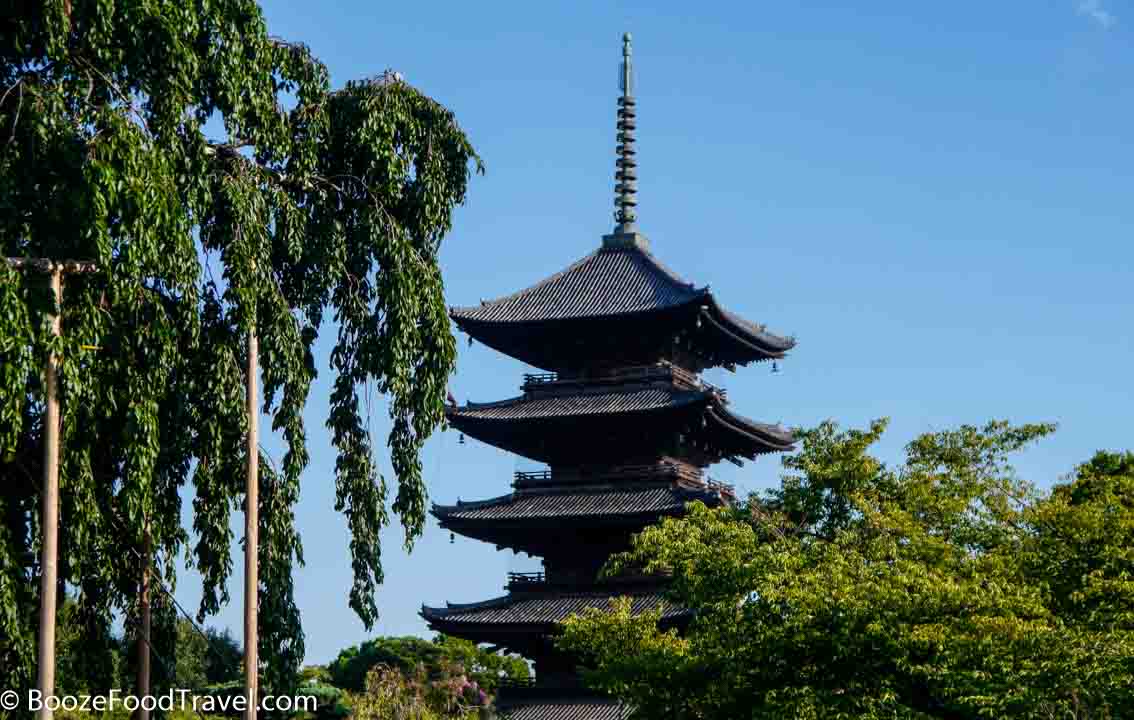 “We all want to forget something, so we tell stories. It’s easier that way.”
– Commoner, Rashōmon

Before setting out to Kyoto with my limited itinerary, I read that the sunset was beautiful around Tō-Ji, Eastern Temple. Or maybe I read that it was meant for sunrise, but I wasn’t about to wake up that early.

I figured it would be easy enough to visit the temple because it was a short distance from the train station, which wasn’t far from my cramped hostel. As I mentioned before, objects on the map appear much closer than they really are; fortunately, Tō-Ji wasn’t that far.

The temple dates back to 796 and was one of three Buddhist temples in the city when Kyoto was the capital. It is the only of those three to have survived, though plenty of other temples are now a part of the city’s cultural heritage. It’s also one of many UNESCO World Heritage Sites in Kyoto — they’re all pretty much lumped together in official listings.

The only part of the temple that people really visit is the five-story pagoda that stands out in this part of the city — there isn’t much else of this height in area. It is also the tallest wooden structure in Japan. Don’t plan on entering the pagoda because it’s only open a few days each year, and I was not fortunate enough to be there on one of those days. Of course, I was also there late enough in the day that the other buildings were closed; I couldn’t enter the kondo or miedo. There are other buildings on the grounds of Tō-Ji, but nothing was all that inspiring. It could’ve been that I had walk a few too many miles in the sun on that hot day in September and only reached the temple before wandering in search of a decent dinner (note: the area surrounding Kyoto Station does not have much for dining options). There were beautiful gardens at the temple, which were relaxing with the light crowd milling about in the late afternoon.

As there wasn’t much else to see at Tō-Ji and I wanted to stay at the temple longer, I played with my camera’s settings to see if I could capture more colorful photos of the pagoda and garden.

Some settings certainly work better at different times of day, as I’ve discovered in the last year. It’s rare that I alter the settings to create brighter colors, but the effects are sometimes more interesting than reality. I found a spot to sit and relax while awaiting the sunset with the pagoda in the background. I think others were waiting as well. But we were kicked out of the temple. That’s right, the temple grounds close just before dinner. I tried finding an angle from outside the gate to set up for a sunset photo, but there wasn’t a good enough spot. There also wasn’t a seat in the shade to wait for the sunset.

Tired and defeated, I headed out for food, which ended up being a quick meal at the chain shop Yoshinoya. I gave up on planning sunset photos for the rest of my time in Japan, though I did manage to photograph a few around Tokyo.

Have you ever been disappointed by a sunset or missed an opportunity to watch one from a comfortable location?