I’m  not generally a fan of hotel tours, but I decided to join one in Gamboa. I arrived in town in early afternoon, waited for my room to become available, and headed out into the streets. I found that there was nothing near the guesthouse other than houses built for American employees of the Panama Canal–all the houses were nearly identical. I also watched wildlife cross the quiet, car-less streets.

Fortunately, as my taxi driver got lost finding my accommodation, he stopped at the Gamboa Rainforest Resort (twice) to ask for directions. I remembered the way, and hoped that it wasn’t farther than my memory recalled–it was only about a mile.

The resort was beautiful, with a great window looking out at the canal zone and rainforest–I wished I had enough money to stay there for a night. Since I had nothing else to do, I checked out the tour desk for ideas. I found a short aerial tram ride through the rainforest that would leave in about an hour. The price of $40 was reasonable for a few hours and a view that I wouldn’t otherwise get.

It was a slow ride in the tram with a family from Spain. The guide had to talk about the vegetation and wildlife in Spanish and English–only half the family understood English. 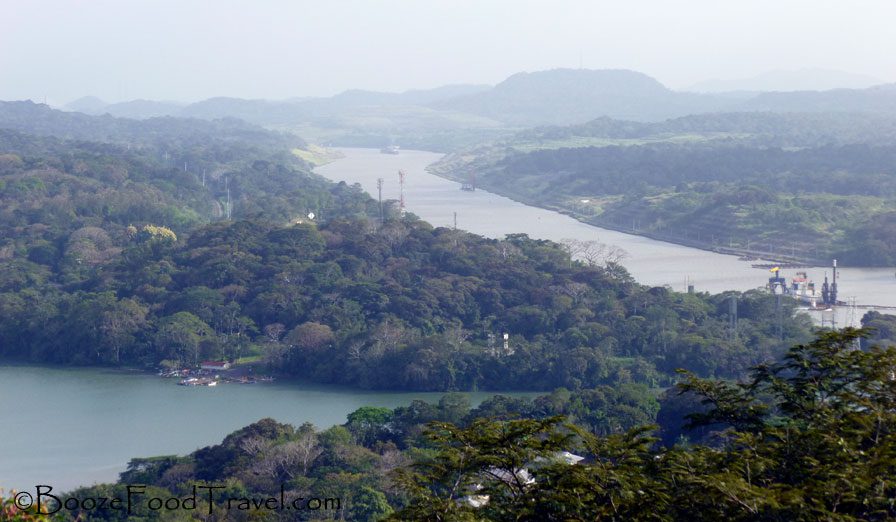 Along the tram ride, the guide pointed out some wildlife in the trees–a few large iguanas and a well-hidden sloth. I saw much more wildlife on my walk along Pipeline Road. The views of the Chagres River and the rainforest along the Canal zone were well worth the trip. I could also see the Embera indigenous village (definitely needed my binoculars for that). The tour would’ve been better had it been early morning when the animals are bit more active, but I didn’t have that option.

When I arrived back at the resort, I sat at the bar for ceviche and a beer (and plenty of water). By the time I was ready to leave, I asked the staff at the front desk of the Gamboa Rainforest Resort to call a taxi to take me back to my hotel since I wasn’t about to walk an unlit street with the potential of running into animals that included snakes. As there were no taxis to call, they offered to find an employee to drive me back in one of the resort’s cars (what service!). I tipped the driver what I would’ve spent on a taxi.

The next morning I went hiking with a couple of biologists who enjoyed playing with wild snakes.