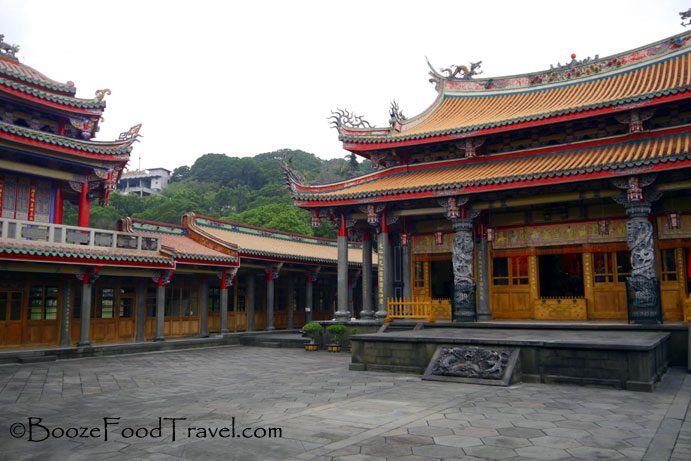 The other day I headed out for an afternoon of art at the Kuandu Museum of Fine Art in northern Taipei’s Beitou District. I had some rough directions thanks to Google Maps, which still hasn’t fixed its maps here (MRT line 3 was on the map when I arrived back in late November, but it disappeared after a couple weeks). As I wandered along the street outside the MRT station in search of the street that I assumed would take me to the National Taiwan University of Art, I walked much too far — the street sign was not visible from the sidewalk. I ended up walking up another street that took me to a large temple. Xingtian Temple (行天宫), which was founded by master Hsuang Kung who constructed temples in Taipei with his own money in the mid-20th century. The temple is part what is called True Faith, which appears more closely aligned with Taoism than Buddhism judging from the Five Saviors enshrined. The main savior is Guan Sheng Dijun who was born in 160 and is supposedly recognized in Confucianism, Taoism, and Buddhism. Guan is the patron of businesspeople and scholars, which means I should probably take notice if I want better luck in business world and academia. After a quick tour of Xingtian Temple, I encountered a monk who spoke fluent English. He gave me an English brochure that explained the temple and beliefs and then sort of pointed me in the direction of the university and museum. Unfortunately, I thought he meant for me to go up the road alongside the temple — that road just led straight up the mountain. About to give up as I wandered back down the mountain, I decided to walk around the area. I noticed the road I had been looking for earlier and decided to head that way to my intended destination. It was another hike up the mountain (or maybe a different one). I managed to find the museum and see Alec Shepley’s exhibition that was inspired by Italo Calvino’s Invisible Cities. I wasn’t impressed by the exhibit, but there were others at the museum that were much more interesting, like the paintings from the Living in Chengdu exhibition. Have you ever gotten lost on the way to a destination only to discover something that made the journey more enjoyable?