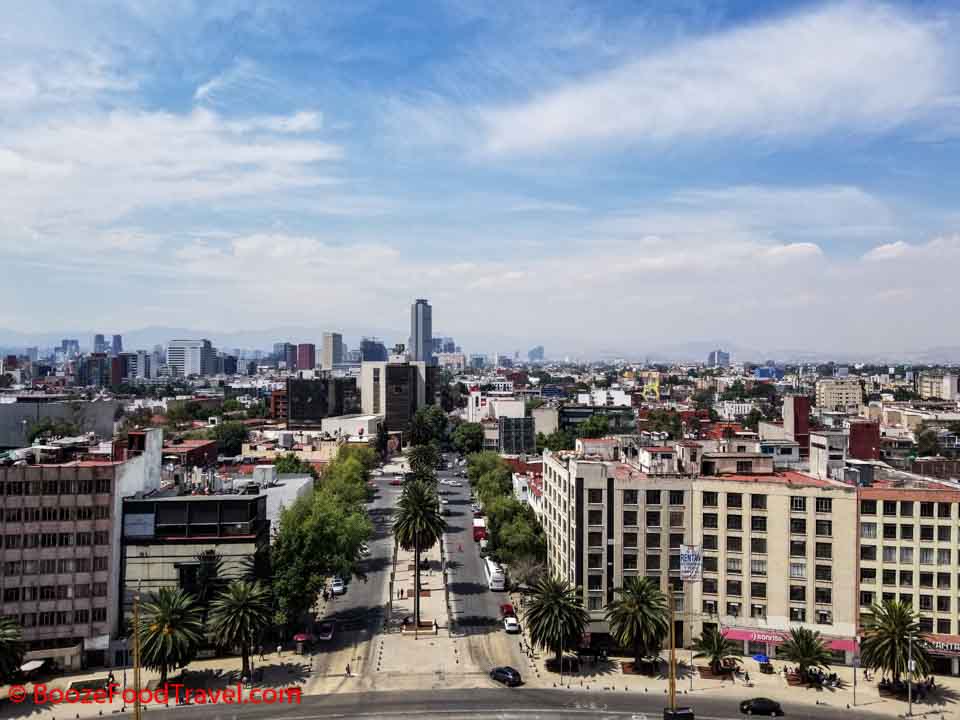 “I’m taking this trip from Mexico City to the Gulf of Mexico and back without any bag or person — only what I can carry in my pockets. The need for baggage is a form of insecurity.”
– Lawrence Ferlinghetti, Beatitudes Visuales Mexicanas

I should consider myself fortunate for a local’s introduction to Mexico City on my first full day in the city (the first half day was spent wandering around my immediate neighborhood in search of food and drinks). I had a list of places to visit during my vacation, but the loose itinerary depended on this day I had planned.

Some years ago, I connected with just about everyone on Twitter who lived in China, which is how I came to know Laura. She offered great suggestions for my trip and we planned to meet up on Saturday — I was willing to go with the flow, and I wasn’t sure how much of the day we’d spend together (turned into a full day).

The day started with officially meeting for brunch at Cafe NIN in the Reforma neighborhood, which was a short walk from my hotel. The evening before I hadn’t ventured quite that far, but if I had, I would’ve fallen in love with the neighborhood sooner. The architecture along these tree-lined streets is exquisite — getting a decent photo isn’t easy amid the traffic, signs, trees, and power lines. I had plenty of time to wander around before meeting Laura as I was awake early. This meant I had time to relax and find some coffee and a small bite to eat.

After our exquisite brunch, I followed my new friend as she led the way through the busy streets in the direction of the Revolution Monument (Monumento a la Revolución). Our walk through Mexico City was more than just finally getting to know each other face to face — Laura knows her history and talked about various buildings and neighborhoods along the way (she’s a better tour guide than most professionals).

She told me about the history of the monument — it was intended to house the national government but was abandoned and then converted into the monument it is today, although it has been renovated. It now displays heroes of the revolution.

We took the elevator to the top of the monument and took in the view on a mostly clear day across the city. We also found some odd displays on the way back down the stairs. The oversized glass bullet lights just didn’t seem appropriate despite the intention (they didn’t look quite like bullets).

From the Revolution Monument, we walked into the crowded tourist center of the city — the historic central district that is home to the Palace of Fine Arts (Palacio de Bellas Artes). As it was a decent walk from brunch, we stopped off for some hot…er, cold chocolate drinks. The best place in town to get that was in Sears (not the best chocolate, but the best for the view).

Who knew that I’d actually want to walk into a Sears after all these years, and that it’d be in Mexico? Well, we waited about 10 minutes to be seated outside so we could take in the view from above the Palace of Fine Arts.

We headed down the congested, yet beautiful Madero Colonia Centro while I was still a bit dazed from my experience of being in a Sears. There’s a reason this street is packed on the weekends — the historic architecture is amazing and there’s a lot of shopping for those who want it (I have no interest in browsing high-end boutiques).

We ducked down some side streets to less crowded ones in the direction of the beautiful Metropolitan Cathedral. Even though I’m still a bit exhausted from touring all the churches around Italy, this one is impressive.c

This church that was built by the Spanish almost 400 years ago was constructed intentionally atop an Aztec site, Templo Mayor. Templo Mayor wasn’t rediscovered until 1978. There’s now a museum as part of the historical site, but it’d probably be more interesting with a guide to explain more of it.

Today, Metropolitan Cathedral and Templo Mayor are side by side — outside the church on the way to the entrance to Templo Mayor, there are indigenous Mexicans offering to perform rituals to rid people of evil spirits (yes, I paid 20 pesos to have my demons expelled before re-inviting them via mezcal later that evening). It involved a lot of smoke, some basil, and the blowing of a conch shell, and I did not understand any of what was said during the ritual.

We were tired after all that sightseeing and walking. We had planned on heading farther out for dinner and drinks, but we decided to stop at a restaurant around Madero Colonia Centro to grab a little more than a snack and a drink before heading out for more. It was a good opportunity as well to get to more about Mexico City as well as my friend’s time in China.

We took an Uber most of the way back past Reforma to La Condesa after walking off a bit of our meals. This is another pleasant neighborhood, though the buildings are more contemporary than in Reforma — there is also a street full of restaurants and bars, which is why we stopped there. Had I felt better at the end of my trip, I probably would’ve gone back to this neighborhood for drinks.

Before ending our evening after a few more drinks, my friend took me to a popular taco cafeteria where I devoured three more tacos because drinking and walking all day (probably around seven miles at that point) made me hungry (more on the food in another post).

We went our separate ways after tacos. I was told the walk back to my hotel should be safe, as it was probably less than a mile at this point. And it was safe.

As I got close to my hotel near Insurgentes station, I saw a sign for punk rock and heard The Misfits playing — it was a small punk bar. I went in and decided I had to have one last beer. I was invited to go upstairs for the live bands, but I decided it was best for me to finish my beer before heading to sleep after a long day of walking.

My introduction to Mexico City was better than I could’ve expected. It’s not often that you get a personal tour from a local, and I was able to take advantage.