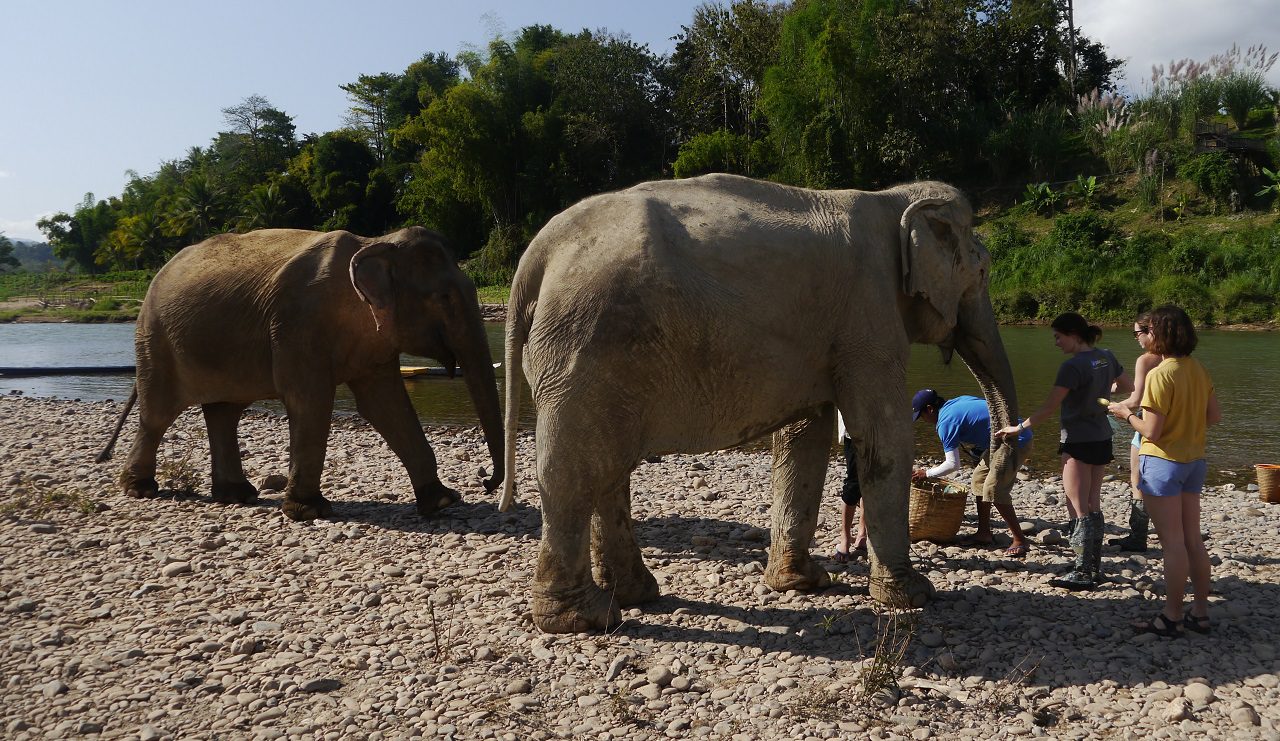 “Well, all that money sounds mighty tempting, Marty, but I think I’m gonna have to go with the elephant.”
– Bart Simpson

While wandering around Luang Prabang in search of day tours that would take me to my destinations outside the town, I noticed a disappointing trend. Most of the tours included elephant rides.

I demanded to see tours that excluded riding elephants because I’ve read enough to know that this is not healthy for the animals. Moreover, it’s likely that elephants are abused in the name of tourism. I would not take any part in that.

Then I came across an elephant sanctuary office — the Elephant Conservation Center. I talked with the person working there to find out more about tours, but discovered that I didn’t have time. This elephant sanctuary had a minimum two-day tour, meaning I’d miss out on other sights in Luang Prabang I had planned.

Fortunately, just nearby was the office for MandaLao, a newer elephant sanctuary that offers half-day and full-day tours. While they don’t provide as much education and interaction with elephants as the Elephant Conservation Center, they still allow enough interaction for a pleasant day with the animals. As I wanted to relax in the town on my last day in Luang Prabang, I booked the half-day tour for $99, though I think I would’ve enjoyed the full day more as the four others in my group were nice to talk with.

The day started with picking up local fruit at a market on the way to MandaLao Elephant Sanctuary — bananas, pineapples, mangoes, and some other fruit that we got to feed to the elephants. The amount of fruit we were told to pick up (MandaLao paid) wasn’t enough for even one elephant, but it was a way for our guide to educate us on the elephants’ diet. 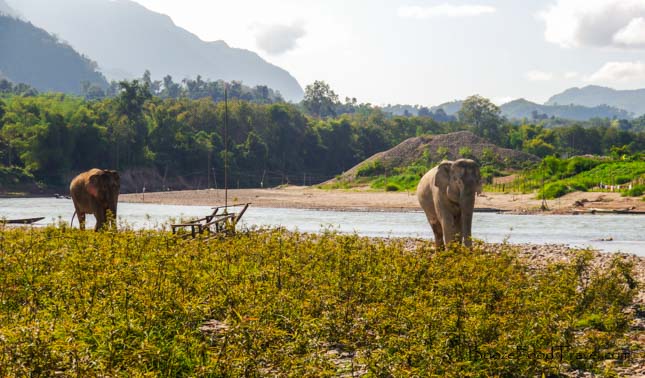 At the sanctuary, we were given coffee while we received an education on the center, the elephants, the culture of domesticated elephants in Laos, and, of course, safety. We were told what certain motions of the trunks meant and reminded not to walk too close behind or to the sides of the elephants as those are blind spots and we might get kicked.

While listening to our lesson, we got to watch another tour bathe a second group of elephants that included the sanctuary’s baby — a year-old elephant named Kit.

The sanctuary is situated among organic farms, mountains, and rivers just outside Luang Prabang. MandaLao Elephant Sanctuary has deals with the local farmers to help provide the elephants with food, though the center also grows its own food to feed them as well as to cook for guests. The views from the center overlooking the river and mountains is beautiful — and it only gets better when the elephants walk to the river for a bath.

While visitors are not allowed to ride the elephants, the sanctuary does employ mahouts who ride them. The center would prefer that the mahouts only lead the elephants through the grounds, but changing the culture that dates back centuries takes time. They have managed to limit the amount of time mahouts ride the elephants, however, and they have eliminated harsh training practices used to domesticate the animals.

Our first task as visitors to MandaLao was to greet and feed the elephants by the riverside. We met three female elephants who were a bit greedy when it came to food. If we didn’t break off a banana fast enough, their trunks darted for the whole bunch and we had to step back.

As it was my first time being up close with an elephant, it took some time to get comfortable — I didn’t have travel insurance and I had no idea if my Taiwanese health insurance would cover elephant-related injuries. We were told that there have been incidents, the most recent of which was the baby elephant headbutting a visitor in the back.

After feeding the elephants and leading them into the river for their twice daily bath (they need an extra one during the dry season), I became a little more comfortable. I was given a rough cloth to scrub the caked mud off them — just throwing buckets of water on them wasn’t enough in some cases, which is why zoos use hoses with higher water pressure.

It was fun to throw water at the elephants — we were told not to worry about splashing their faces and they supposedly enjoy it. I was a bit sore afterwards as I hadn’t had such a workout in a while. 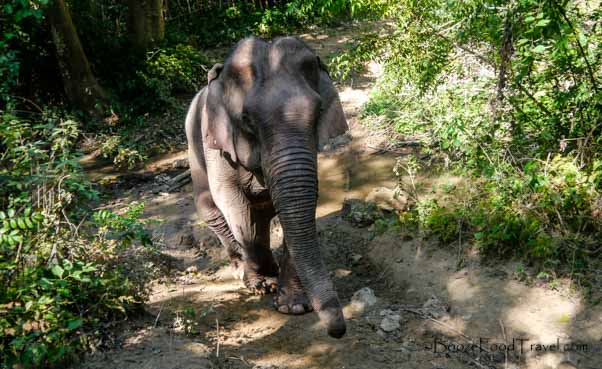 After their bath, we led the elephants back along the trail to their home — the elephants have a routine of a circular walk each day so they become accustomed to their home. The trail cuts through organic farms, which I learned grow things like mustard as a natural insect repellent to protect other crops.

As the elephants walked ahead of us, we were told more about their daily routines and were able to ask questions. It was an educational walk through the forest. Fortunately, MandaLao provided me with some special boots to wear that were definitely better than sandals with all the mud and elephant poop.

Halfway through the hike, we stopped for a snack break — we had more bananas to feed the elephants. While they were standing in the stream, we were above on shore, forcing them reach up with their trunks to grab bananas from our hands. 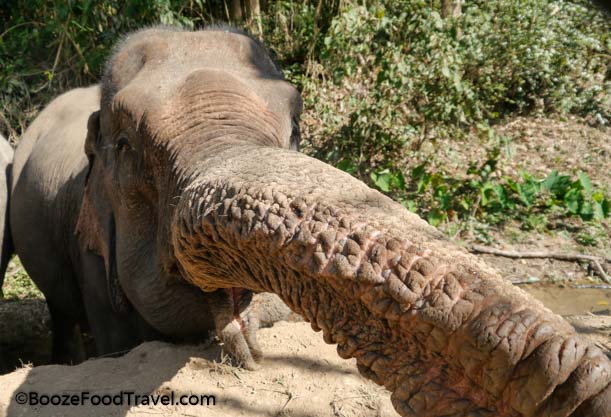 While we weren’t on a tour that included meeting the year-old elephant Kit, we were fortunate enough to run into the baby and his mother on our hike. MandaLao limits the number of people who can interact with Kit each day, and tours were already booked for my time in Luang Prabang.

As everyone else was on the full-day tour, I was taken back to the main building after walking with the elephants until noon. I was treated to a local organic lunch, which was much too big for one person, while overlooking the river and mountains. It was a calm, quiet scene that I would’ve liked to enjoy longer — it was by far the most relaxing moment I had on my trip through Laos. And they didn’t mind if I sat to enjoy the view before heading back to Luang Prabang where I could spend the rest of my final day exploring the food and drinks of the town.

Have you visited an elephant sanctuary? What was your experience like?