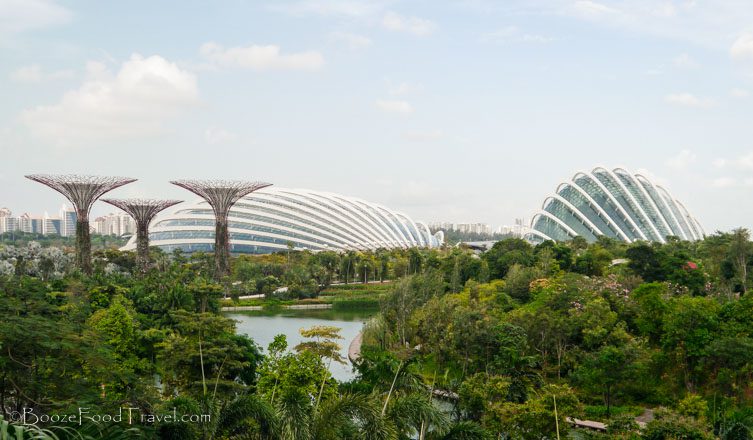 The trees lean closer today.
The singing in the electrical woods
has gone dumb. It looks like rain
because it is too warm to snow.
– Yusef Komunyakaa, Rock Me, Mercy

It was my top destination in Singapore — alright, second on the list after Bukit Timah Nature Reserve, which was closed for renovations. Everyone who had been there told me that the Gardens by the Bay was the best spot in the small nation. After my visit, I agree (though I still haven’t been to Bukit Timah, so I suppose it still up for debate).

After wandering from Marina Bay station to the waterfront promenade, I escaped the afternoon heat by cutting through the Marina Bay Sands mall — the mall that contained everything I couldn’t afford (alright, I could afford a bottle of water at 7-Eleven, but everything else was out of my price range). What I didn’t realize before I arrived is that access to Gardens by the Bay is through the mall — up the escalators and on a bridge over the busy street to a magnificent view of the Supertrees and gardens below. 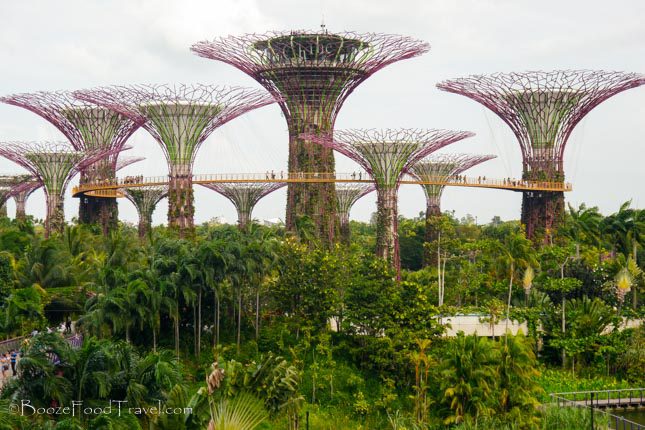 If not for the crowds and humidity, I could’ve sat overlooking the gardens for hours — as it was I took more than my share of pictures from the lookout point above. 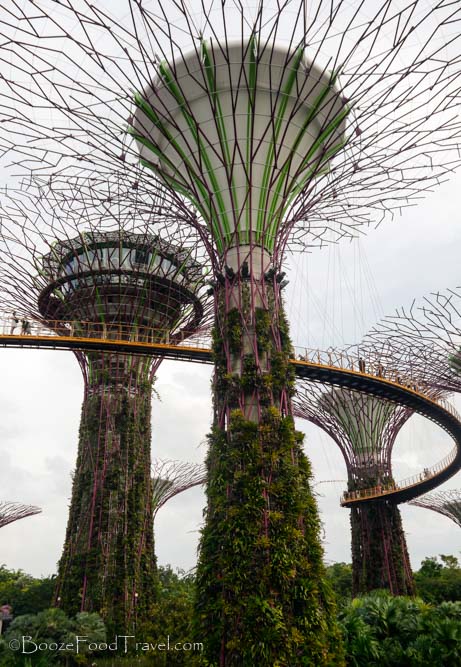 I didn’t wander through the gardens too much as I had already been walking about the city much of the day and my feet were already sore, but I had to check out the Supertrees before heading to the domes. This meant that I missed out on a few other parts of the gardens like the dragonfly and kingfisher lakes.

I was more interested in the OCBC skyway between the Supertrees, which cost S$5 so it didn’t break the budget for the short walk. From 22 meters above the gardens, the view is beautiful — and it’s possible to look over everyone’s head to get the photo.

The only thing I missed with the Supertrees was the Garden Rhapsody with light and music each night. The trees are lit up with bright colors with music. On my visit it was only in blue and white without music in honor of Lee Kwan Yew who passed away a few days before I arrived. It was still beautiful to see the trees lit up as the sun set, but it also gives me another reason to revisit Singapore for another show. 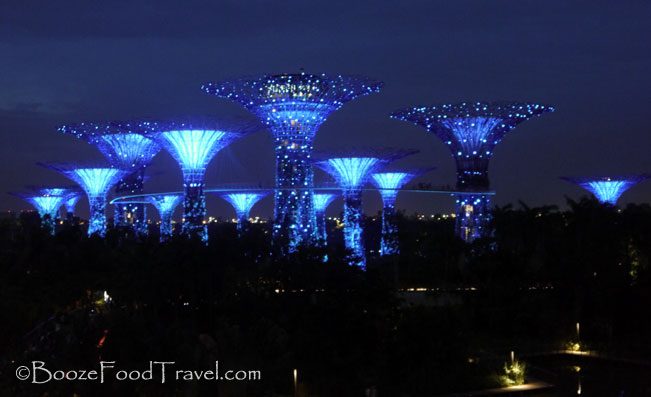 I reached the biospheres that house the Cloud Forest and Flower Dome and stood on line for a ticket. I wasn’t interested in the Flower Dome, but was forced to purchase a combination ticket for S$28 (only locals can buy a single ticket for one or the other). The ticket price seemed excessive, but I was already there and it was something I wanted to see. Unlike many more affordable museums I’ve been to in the last year and a half, the domes at Gardens by the Bay accept credit cards, so I didn’t have to worry about making another trip to the ATM.

Of course, I headed for the Cloud Forest first — it sounded like a more interesting biosphere, and I was right.

Upon entering I was greeted with a blast of cool air and mist from the waterfall. I wanted to stand beneath that waterfall to cool off more quickly, but the air was cool enough for me for the duration of my walk through the Cloud Forest.

The dome houses beautiful plants along the path and educational information — they even offer a mobile app to enhance the tour through the dome, but I couldn’t download it as I had no wifi connection at the time. It feels like a mountainous hike through a forest that is somehow cooler than it should be; the artificial mountain is covered in plant life and surrounded by a walkway that juts out at all angles. There was even a LEGO garden, including LEGO Venus flytraps.

At the top of the Cloud Forest, visitors can take in the view of the entire dome as well as the landscape outside the windows — another angle of the cityscape the Supertrees out in the gardens.

After a long walk through the mountainous dome, I crossed over to the Flower Dome, which was more interesting than expected — in some ways it was more enjoyable than the Cloud Forest.

Most of the visitors to the Flower Dome were in the center, taking photos with the tulip exhibition that incorporated childish fairy tale houses (because that’s what people think about when they think about tulips and the Dutch). I’m not interested in tulips or cheesy cartoon houses, so I was able to walk around and learn about the rare plants that are housed in the dome. This dome is also filled with sculptures, many of which are intricate wood carvings, that have little relation to the plant life that surrounds them (though they are enjoyable to see).

The Flower Dome is separated into sections by region and climate — rare plants from different continents are located next to one another with informative signs for visitors learn more about what makes these plants unique.

What I expected to be a dome filled with colorful flowers turned out to be an enjoyable walk through the world of ecology — a global flora capsule of sorts.

Seeing so much green around Singapore certainly helped to change my perception of the nation being a sprawling city. This is much more than just a city; it’s a city with an oasis or three to help residents and visitors escape.

Have you visited the Gardens by the Bay? What did you think?