“Turkey: A large bird whose flesh, when eaten on certain religious anniversaries has the peculiar property of attesting piety and gratitude.”
– Ambrose Bierce, The Devil’s Dictionary

I’m fortunate to have a few friends here in Taipei. Some of them were able to join me for my birthday last week. And my two American friends joined me for Thanksgiving dinner in Zhongshan (we didn’t go back to Dream of Hobbiton though).

The original plan was to have a fancy roast duck dinner. Unfortunately, the restaurant I found wasn’t quite what we wanted (it was also a bit overpriced). Instead, we decided to try a Dongbei restaurant (for those who don’t know, that’s northeastern Chinese cuisine) called 東北軒酸菜白肉鍋 at 79 Chongchun Rd. All three of us had previously lived in mainland China and love the Dongbei food. I was a bit disappointed to not get my roast duck, but everything else was great.

The staff at the restaurant was friendly, and even waived the corking fee for our wine so we could celebrate more. We contemplated going out after dinner to find some small restaurant for the duck, but decided that we had enough. We ordered 水煮鱼 (a spicy fish stew), garlic eggplant, 鱼香肉丝 (fish fragrance shredded pork, which the staff mentioned did not actually contain any fish), and spicy cabbage. While all this food wasn’t really what we were used to in mainland China, we still enjoyed what we ordered. Of course, it didn’t quite matter what we ordered as we enjoyed sharing our stories of life in the mainland and circumstances that brought us to this island that’s China but not China. As we finished dinner and the restaurant was closing at 10pm, the staff wished us a happy Thanksgiving (I’m still not sure what the Chinese word for Thanksgiving is, but I’ve always been partial to using 火鸡节 (fire chicken festival)). Rather than head home after dinner, we stopped in Family Mart for some beer to drink in Linsen Park before catching the last MRT home.

Despite the lack of turkey, or in my case duck that I was so looking forward to eating, Thanksgiving had a wonderful Taiwanese atmosphere that I’m happy to have shared with my friends. 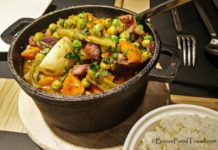