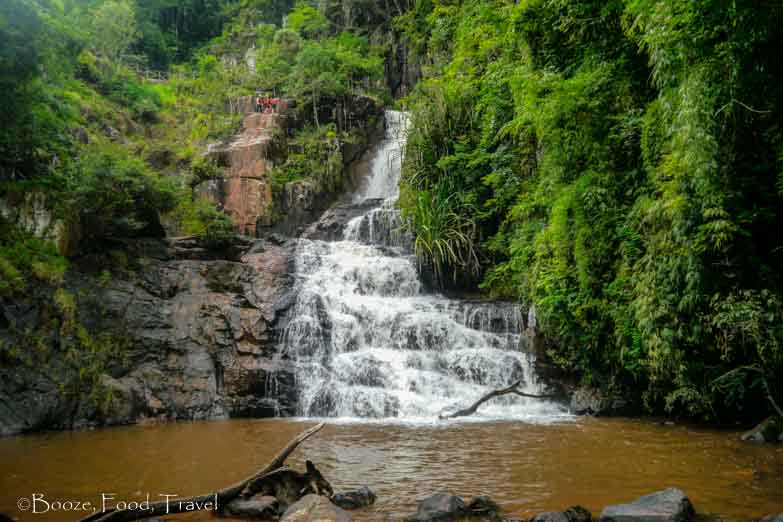 One of the highlights from a trip to Dalat is visiting the waterfalls. Unfortunately, because I didn’t plan ahead, I missed out on the best waterfalls in the area. Instead, I took a day to visit Datanla and Prenn. The former was the more interesting and worthwhile stop that day. 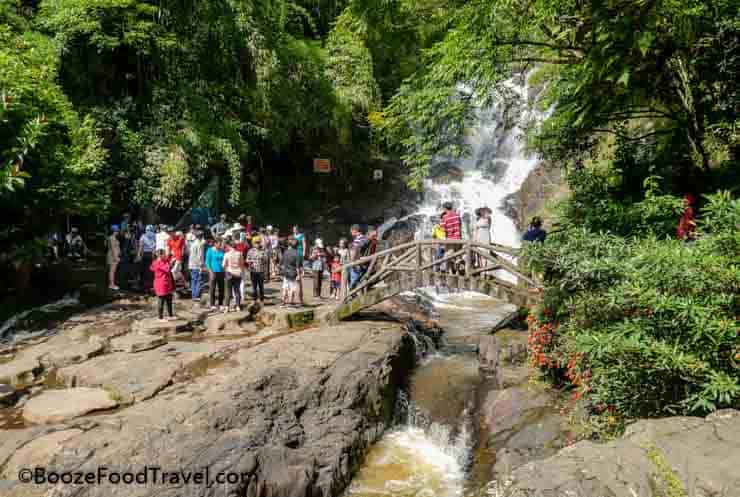 Datanla is the closest waterfall to Dalat–it’s a short taxi ride from the city through the winding mountain roads. In all, it cost less than $10 to get there with the meter running (and my hotel was a bit out of the way).

After purchasing my ticket, which was about $1.50, I followed the crowd down to the waterfall. I was worried that the park would be too crowded with all the locals traveling in the area–it was summer vacation for many Vietnamese after all. 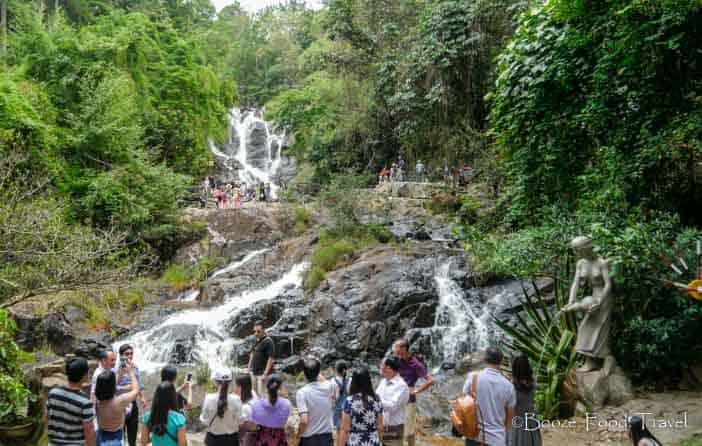 As usual, I did almost zero research before heading out, so I didn’t know what to do or where to go when I arrived. I found the crowd staring at a small, yet beautiful waterfall surrounded by some cheesy statues and decorations. There was even someone dressed as the Monkey King charging money for photos–obviously, I did not take a picture of the Monkey King because I didn’t want to pay for it. 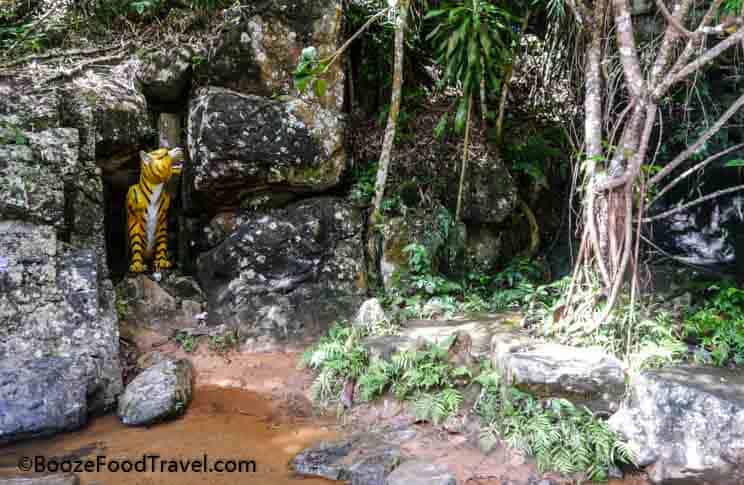 There was also a sort of roller coaster that ran through the park. It did not look all that safe and was intended to keep kids entertained. Most of the track was away from the waterfalls, so I can’t imagine it offering any great views. 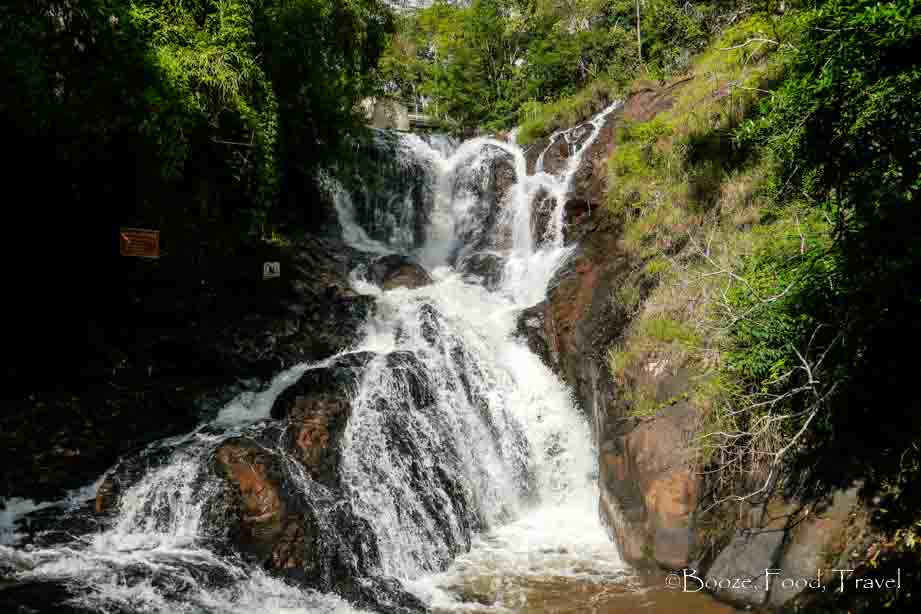 After enduring the crowd, I was about ready to head to the next destination. But I decided to check out the little trails off to the side before leaving. Good thing I did. 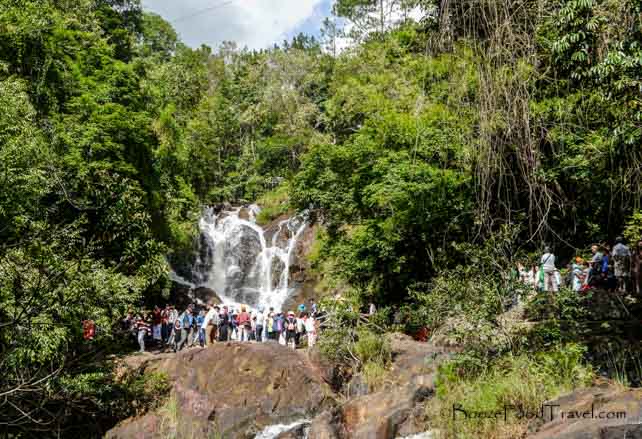 The trail I found led farther down the stream from the waterfall to more waterfalls. There was a slow cable car that I could’ve taken, but I didn’t think I needed to pay to hike down. The cable car wasn’t high up, so it wouldn’t have provided significantly better views than the hike anyway.

At the end of the trail, there were more waterfalls and far fewer people. This is the spot to relax and listen to the water flow.

Below the viewpoint there was another waterfall. I saw a few people below the waterfall and wondered how to get down there. After searching for a trail, I realized that there was only an elevator to get down.

That’s when I discovered you have to pay to take the elevator. And the elevator ticket is a package deal with a round-trip cable car ride. It was another $2. There was no negotiation allowed here. So, I gave in and bought the ticket.

Once I got down below the falls, I found a more impressive view. I was also able to watch a group rappel down the waterfall. It looked like it would’ve been more fun with a steeper cliff. 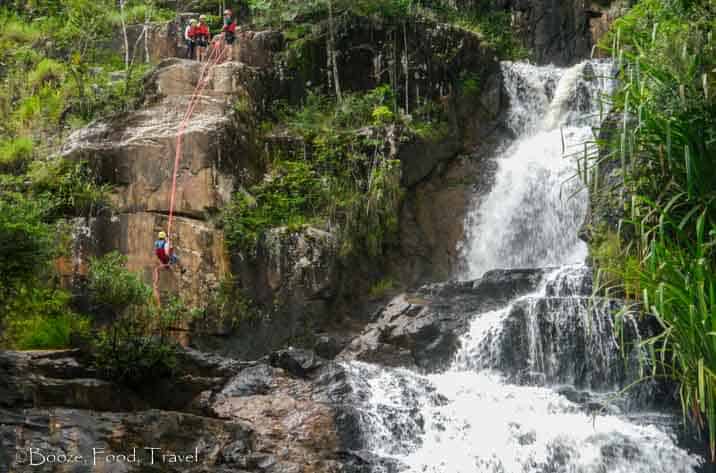 With only a few people on the shore below the waterfall, I sat and relaxed for a while. I was in no rush to leave. As more people arrived, I decided it was time to head back. 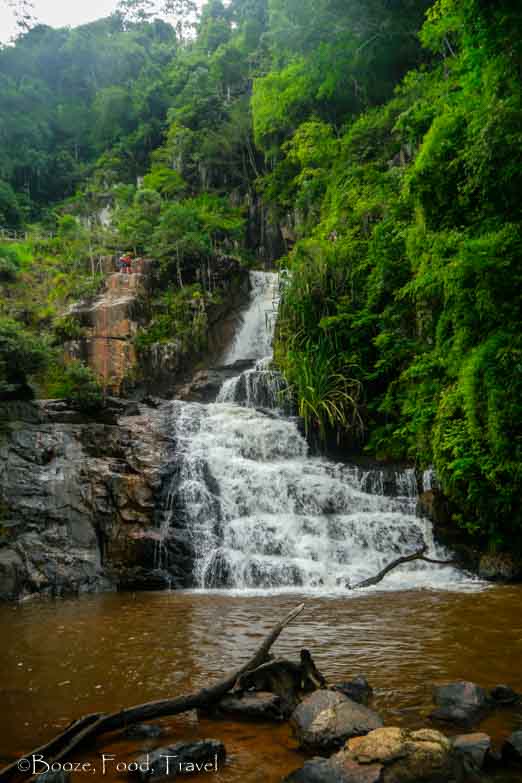 I got back in the elevator with a few others and ascended the cliff slowly. Only one problem: the doors wouldn’t open when we reached the top. The elevator returned to the bottom and the doors remained stuck.

Fortunately, I was able to pry the doors open so we could step out. But we had to wait for the staff to notice that the elevator was no longer working. There was no one to help us at the bottom, and the staff above wasn’t paying attention unless someone wanted to go down. 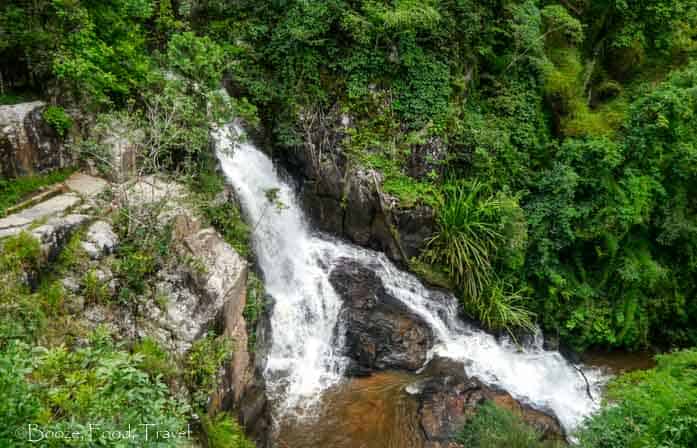 After waiting 15 minutes, it appeared the elevator was fixed. I let another group get on ahead of me to ensure it worked. As soon as I got out at the top again, the elevator broke once more.

There was more to the park below the final waterfall, but it was closed to the public. There was a construction crew there and it looked like they were working on trails. There have been accidents that have killed adventure tourists who were not properly prepared for rappelling trips, which forced the government to suspend some activities. I can only assume this is the reason for not being able to explore any further.

With my forced cable car ticket, I decided to take it back to the park entrance instead of taking the short hike. Fortunately, the cable car didn’t break like the elevator.

Datanla wasn’t the most beautiful or adventurous waterfall trip I’ve taken, but it was a worthwhile stop while traveling through Dalat.