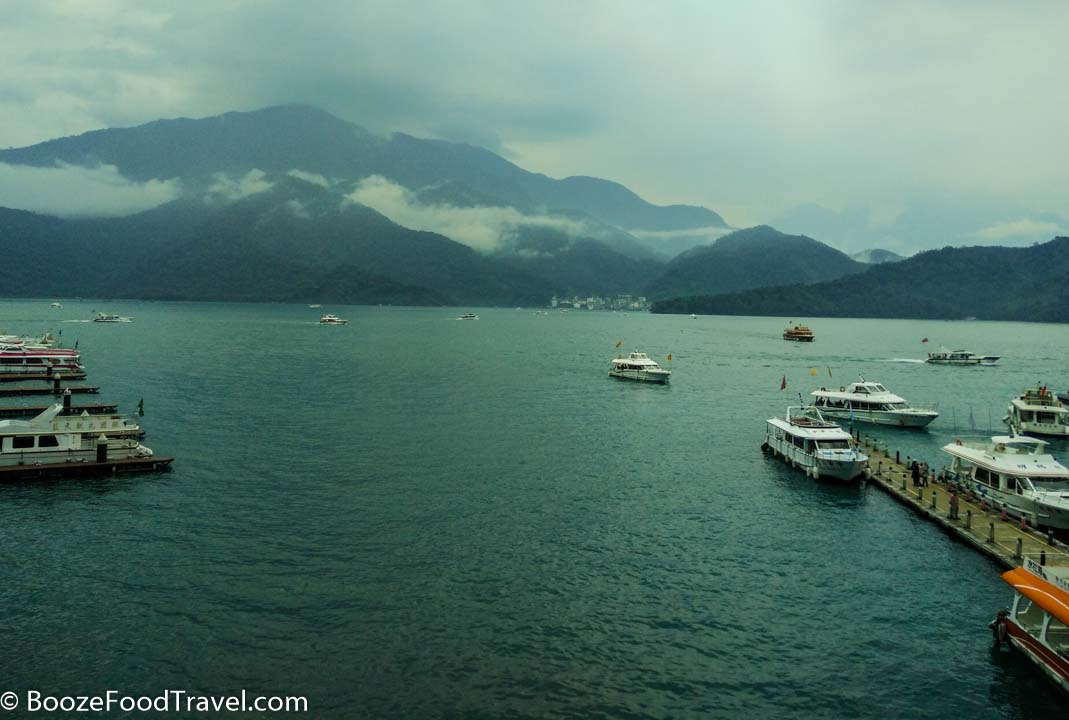 “But now the sun and moon illumine a gold and silver terrace,
And, clad in rainbow garments, riding on the wind,
Come the queens of all the clouds, descending one by one,
With tigers for their lute-players and phoenixes for dancers.”
– Li Bai, Tianmu Mountain Ascended in a Dream

While my parents visited Taiwan for the first time, I searched for places to visit outside Taipei. I had to consider what my parents would enjoy and, if it was more of a nature destination, how physically strenuous it would be. Sun Moon Lake (日月潭, Rìyuètán) in central Taiwan fit the bill. As an added bonus, I had never been there.

Sun Moon Lake is the largest lake in Taiwan, covering more than 3 square miles, and is designated a National Scenic Area. There’s even a pagoda that Chiang Kai-shek had built in memory of his mother, but we didn’t go there.

We took the high-speed rail to Taichung Station and transferred to the other Taichung Station via the slow, local train. We saw nothing of the city — we wandered near the bus station in search of dinner before getting some sleep in preparation for an early morning bus to Sun Moon Lake that would take about 90 minutes.

It was a scenic bus ride through the countryside of Nantou County, winding around the mountains and along rivers. The ride was alright — my dad wasn’t pleased with the idea of a long bus ride, but he didn’t seem to mind this one. We also found that the bus stops at the high-speed rail station, which shortened our return trip to Taipei. If we had stayed near the high-speed rail station, the bus might’ve been too crowded on the way to Sun Moon Lake. 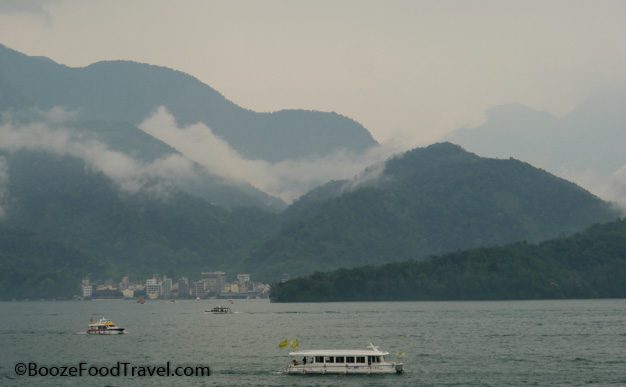 Although it’s the less touristy side of the lake, we stayed near Shueishe Pier because the main bus stop for the ride to and from Taichung was there. And the Hotel Del Lago was right around the corner from the bus stop. My parents chose the hotel after I told them which side of the lake to look at, and they wanted one overlooking the lake. Unfortunately, the deck outside the lobby had no chairs, and downstairs was slightly obscured by the trees. Still, it was pleasant sitting outside for breakfast and watching the clouds pass through the surrounding mountains — the morning air was still cool enough to enjoy.

It was humid and hotter than it should’ve been in the mountains, but we managed to see the highlights of Sun Moon Lake despite the hindrance. Granted, we didn’t do as much hiking as I would have had I taken the trip on my own — parents aren’t always in the best shape for such activities — so we ended up taking the boats that cross the lake and the bus that circles it to avoid too much walking. We avoided taxis because they’re overpriced. Note: Public transportation (other than long-distance buses) at Sun Moon Lake ends around 5:30 pm, and the taxis charge a premium at flat fares only to drive around the area.

Taking the ferries that cross the lake between three piers is a great experience — the views from the lake are exquisite. It can, however, get crowded with numerous ferries running simultaneously with all the tourists (mostly from mainland China). As most tourists visit Sun Moon Lake as a day trip, the ferries are the most efficient means of transportation. On the first ferry ride, we had a difficult time figuring out which pier our boat departed from — we asked around and got pointed in the right direction along with a few other confused tourists.

When we arrived at our hotel, it was raining. As the rain dissipated, the mountains surrounding the lake became clearer as the clouds floated through. If it hadn’t been for the masses of tourists, the view would’ve been even more impressive — it’s probably the reason Chiang Kai-shek vacationed there (there’s even a scenic outlook along the lakeside trail that was supposedly his favorite place to sit).

On the first day, we took the ferries to all three stops — the first was Xuanguang Temple. The temple itself is not that interesting after visiting so many others throughout Asia. It was a lot of steps to get there, and all the tours stop there as well, making it a bit crowded. Around the back was a trail that we decided to wander despite not knowing where it led — it was nearly empty and peaceful.

We wandered past betel nut palm plantations, with signs warning of guard dogs and to remain on the trail.

Upon reaching the end of the trail, we were on the main road around the lake. The trail led to Xuanzang Temple, which my dad wasn’t willing to walk up to (I went along with my mom). The views from higher above the lake were amazing. Again, there wasn’t much of interest at the temple other than the view.

We inquired about taxis and the distance to the next ferry stop along the winding road. Rather than walk the main road that didn’t always have a shoulder or sidewalk, we decided to walk back to Xuanguang Temple and take the ferry to Ita Thao.

We wandered the streets around Ita Thao — it was mostly street food vendors and souvenir shops. We searched for a restaurant and decided on a small place that served local dishes. I had to order the black pepper deer (the deer is a spiritual animal for the indigenous people). The food was nothing special, but it was better than what I ate in Tainan. 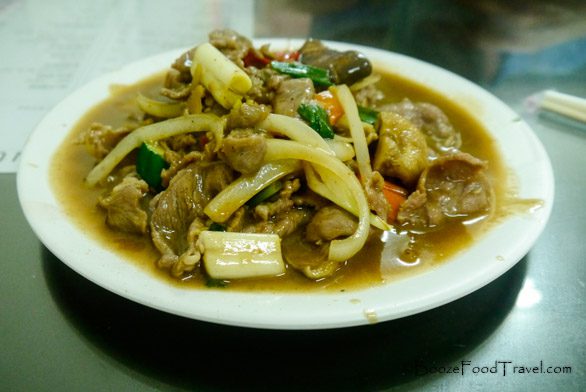 Back at Shuishe, we found nothing to do after dark. The best choice was buying a few drinks at 7-Eleven and sitting outside staring at the dark lake — the distant lights at Ita Thao illuminated almost nothing of the area. It was peaceful as most of the tourists departed.

On our second day, we bought full-day bus passes and headed for the Aboriginal Culture Village by way of the Sun Moon Lake Ropeway. We arrived before most of the tourists and had a private gondola through the mountains — the clear day provided bright scenery surrounding the lake (though I had to stick my camera out the small openings in the windows).

The Aboriginal Culture Village reminded me a bit of Folk Culture Village in Taiwan with its singing and dancing performances — the image in China is always of smiling minority ethnic groups singing and dancing. The difference in Taiwan is that the village also has some decent cultural exhibits — rebuilt traditional homes that explain daily life of different classes of people among the aboriginal tribes.

There were also some interesting statues in the area. I swear one looked like Charlton Heston and another was Ralph Wiggum with a flute up his nose…er, rather two flutes.

After returning to Ita Thao, we took the bus around the winding roads along the lake to Wen Wu Temple (文武廟). The Confucius temple, which was rebuilt twice after the Japanese built a hydroelectric dam in the area, is dedicated to the First Ancestor Kaiji and the God of Literature. It’s an impressive temple, but it still lacks a bit of charm (or maybe it was just too many tourists).

Most interesting part of Wen Wu Temple, other than the view of the lake, was the digital fortune teller. Who needs to shake some sticks and find the number for the fortune when you can let a machine do it for you? 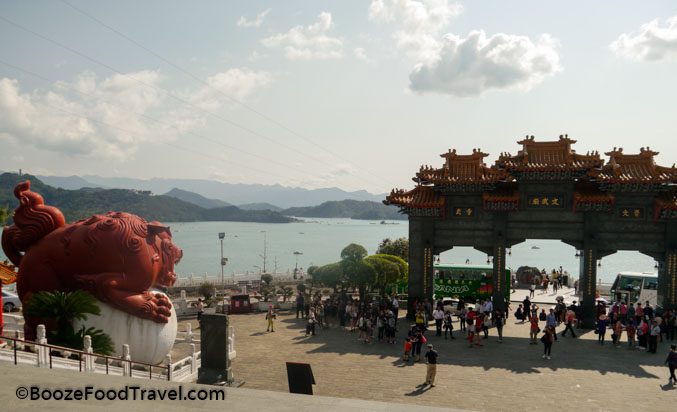 In all, it was a relaxing weekend at Sun Moon Lake. It felt good to see another natural wonder of Taiwan and get out of the cities. Plus, it seemed to be a highlight of the tour for my parents.

The only disappointment I found with Sun Moon Lake is that you can’t rent a kayak or canoe to paddle around the lake (probably because of all the tourist ferries crisscrossing the lake). There are more hiking trails and walkways around the lake, which I would’ve taken had I been traveling on my own.