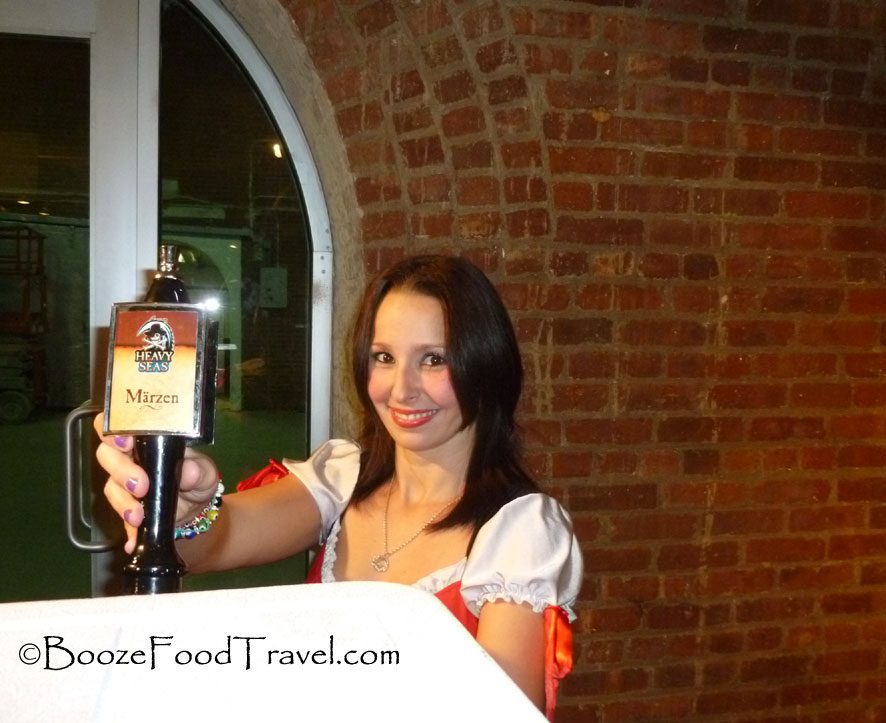 Thanks to a deal from Thrillist, my friends and I attended an Oktoberfest event at La.venue near Chelsea a few weekends ago (this post was delayed because of the hurricane and other things). I showed up a bit earlier than my friends and ended up standing in line longer than expected as the event started a half-hour late. Fortunately, there was a mobile cheese vendor parked right next to the front of the line with a the greatest sign in the world: Free Cheese.

La.venue is an interesting place to hold Oktoberfest–it’s a large industrial space with a few large rooms. The center room was reserved for tables, music, and some odd contests like best beer belly (I couldn’t even qualify for that contest if I wanted to). Hidden in a corner was even someone rolling cigars, which was more interesting than a non-smoker would think. The beer stations weren’t set up according to any logic that I could tell–not even by region. But that didn’t really bother me, as long as I could easily make my way through the crowd and not have to suffer on long lines for a drink.

The event did not seem to live up the advertised expectation. There were supposed to be more than 100 beers, but I doubt that. I tried most of the beers (some more than once), and I still felt fine. I only avoided beers I’ve had before and didn’t particularly enjoy–there’s no reason to waste time on beer I know I don’t want. There is also the possibility that some beers may have run out from the first session of the event (I saw plenty of extremely drunk people walking out as I arrived at the venue).

Being at the front of the line to enter, I was able to move rather quickly to my first few beers. As the day wore on, I sought out lines for the beer that were shortest unless my friends recommended something.

On the food side of things, there was a dried meat vendor that handed out samples–The Jerky Hut in Pennsylvania. I had a taste of the ghost pepper beef jerky–it was a great balance of sweet and very spicy, and the spiciness built up and lingered. It was an impressive spice blend. I also had a taste of ahi tuna jerky, which was quite good as well, but not spicy. Unfortunately, they ran out of the kangaroo jerky by the time I got there (just another animal I haven’t eaten).

Some of the better beers I tasted throughout the event were American microbrews.