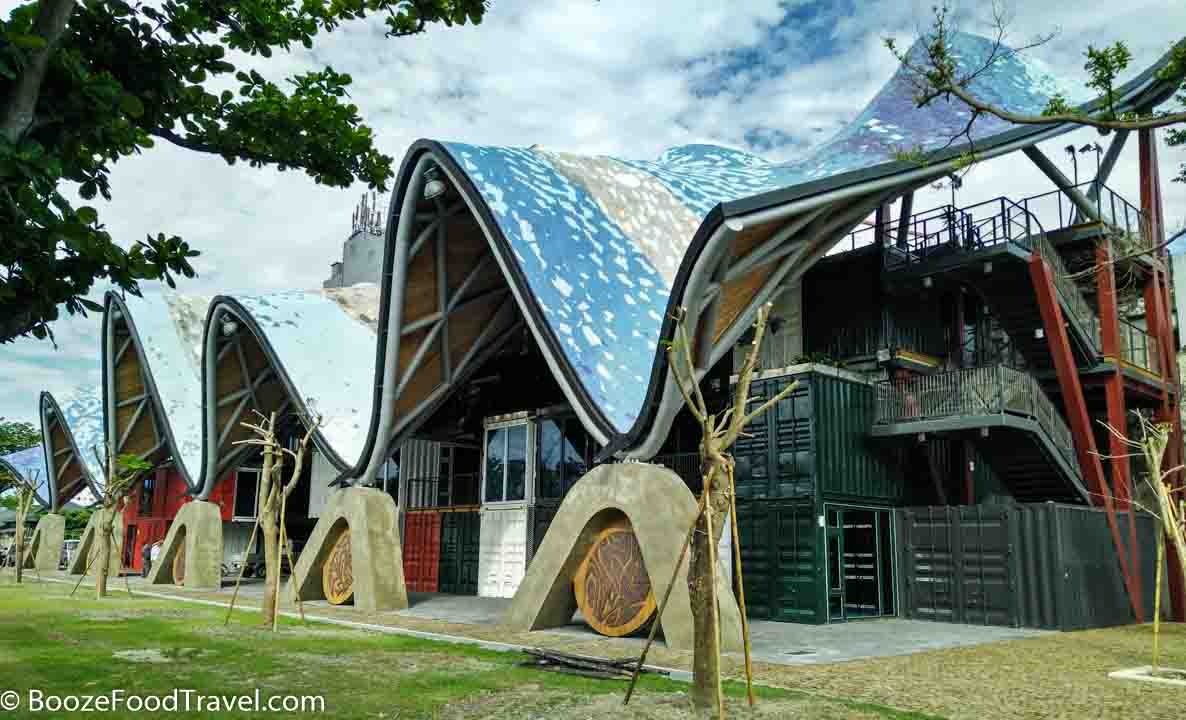 I like to find
what’s not found
at once, but lies
within something of another nature,
in repose, distinct.
– Denise Levertov, “Pleasures”

While I had time to myself for a bit of local travel before departing life as an expat, I decided to take a few short trips around Taiwan. The first trip I took was to Taitung in the southeast.

Taitung has a reputation as a quieter destination for tourists — it’s usually a stop-off point for everyone heading to Green Island. While I would have liked to go around the island, I decided instead to stay in town and rent a bike to ride along the coast.

The Puyuma Express from Taipei Main Station took a little over four hours, but the train was comfortable. It would have been better if I had bought a decent meal and more coffee for the ride, but there’s only so much I can prepare before my trip. I had a list of places to check out in Taitung, but not much. And as I found out later, much of what I would have liked to see is much farther outside the town — certainly too far for me to ride a bike.

Without a lot of sights to see, I thought it better to take my time and wander through Taitung on my way to the few destinations I had in mind.

As I arrived after lunch, I decided to walk around the neighborhood from my hotel. The Railway Art Village and Liyushan Park were not far, and I could head to the night market as it wasn’t out of the way either. I had also hoped to find a mid-range restaurant for at least one dinner during my stay. 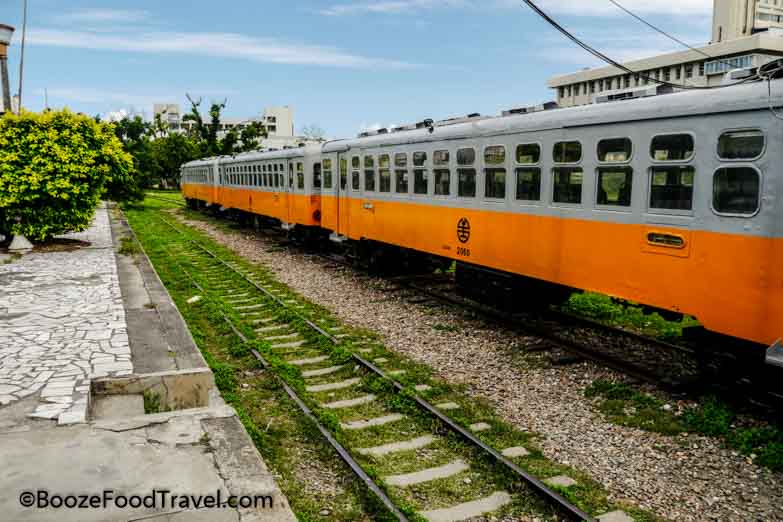 My first stop was the Railway Art Village, which I went to a few more times during my visit to Taitung. It’s a pedestrian street that runs from the old railway station, which is now a bus station, to the road leading to the temple at Liyushan Park.

While I was there, some construction was going on for shipping container artist lofts. I would have liked to check out the space, but it wasn’t open to the public. There were a few other buildings in the area that looked as though they had just been completed and awaiting tenants. I’d guess that this area would be more impressive in another year. 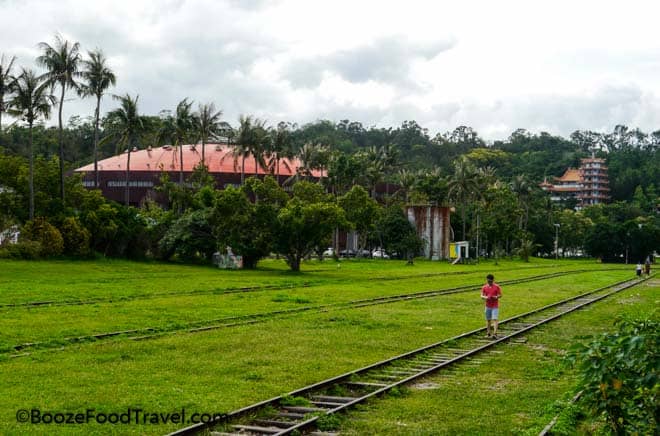 There’s a small craft vendor area toward the north side of the park that is home to Tiehua Music Village (鐵花村) that has local musical performances in the evening (a drink purchase is required for anyone who wants a seat). 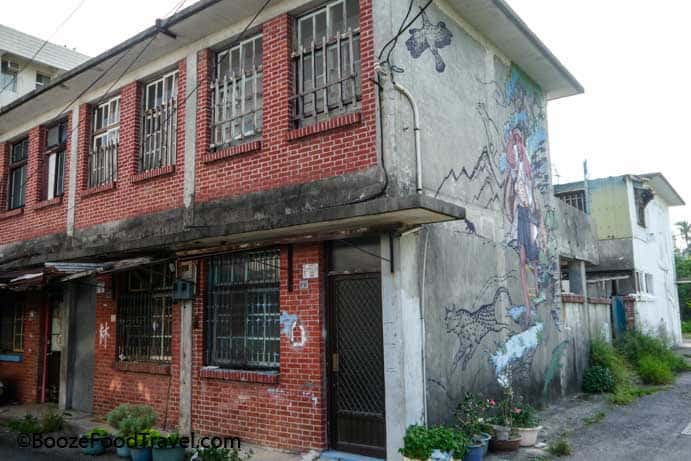 On opposite side of the old train tracks is more of the artist village, housed in decaying buildings that aren’t as well visited as the old train station. There are a few small cafes and shops, though nothing I stopped in. This would definitely be a great place to convert a couple buildings into a hostel with a bar and cafe, though it’d likely cost a fortune to renovate as the buildings are in poor shape.

As I walked through the street past the art district, I noticed a park across the busy street and decided to head over. It was Liyushan Park. As I entered the park, I saw trails off to the side, though I had no idea how long those trails were. Up ahead, I saw groups of older people singing karaoke and playing games in front of a temple. More importantly, I spied a pagoda and thought I could climb it for a better view of the city.

The pagoda, unfortunately, was closed. I was, however, able to go to the third storey of the temple for a view out to the ocean (not as impressive as it would have been had I been able to climb the pagoda).

Already exhausted from the heat, I decided to wander the town more instead of pursuing the hike through the park. Besides, it was past lunchtime and I needed some food and air conditioning.

Walk along the Coast

After a late lunch of noodles because there were few options open at the time, I headed for the coast. I was told it wasn’t far, but it turned into a longer walk than anticipated.

It was only a 10-minute walk to Haibin Park on the coast, but the trails from there went much farther. This route was complicated by the heat and my taking the long way to Paposogan (seashore park), in addition to my wanderings before getting to the seaside. 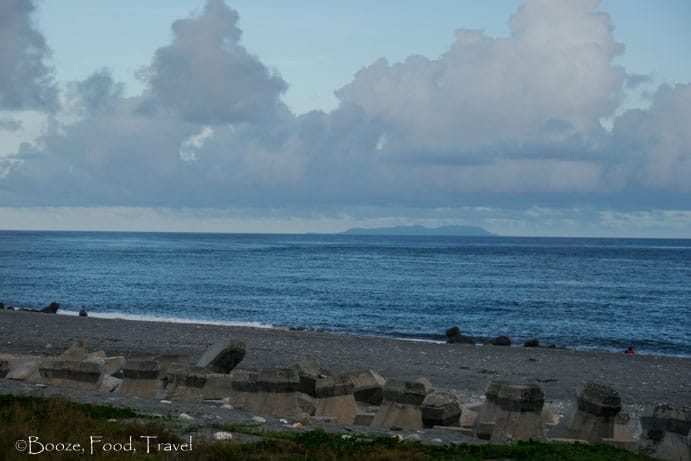 The walk along the seaside park was relaxing, though the humidity hindered my adventure. The dark clouds rolling in from the mountains told me to head back to my hotel for an umbrella and to give my feet a rest.

Despite the oppressive heat, it was a pleasant walk along the road with little traffic. There weren’t many interesting buildings along the way, but there was one haphazard mess of a dilapidated building that looked like a student art project. If it was safe to go in and open to the public, I wouldn’t mind having a look.

As I grew hungry from wandering around the city, I headed out for an early dinner (or at least a first dinner). The Taitung Night Market was better than I expected in some ways — it didn’t feel as touristy as the ones in Kaohsiung or Tainan and as I arrived early it was not at all crowded. Of course, not all the vendors were set up either.

I ended up with some fried crabs to wander around the market with. There wasn’t much happening at 6 pm, but at least I could see what was offered in the area in case I wandered back when it was more crowded. I didn’t want to stay late as I wanted to check out a music venue I spotted earlier.

Tiehua Music Village was the most popular spot in town for some nightlife after the night market. The drinks at Tiehua were decent and much less expensive than in Taipei, though it took a long time to get served. They have a few specialty cocktails mixed with locally-produced rice wine for about $5. Of course, that’s what I ordered.

It was hot and humid during my stay, so drinks outside, while cool and tasty, made me even more lethargic after walking around all day. I wanted to stay and listen to more music, but I was exhausted and decided it was better to sleep early in the air conditioning. Also, I saw lightning in the distance and didn’t have an umbrella with me.

On my last night, I found Kasa Cafe — an artsy rustic bar that wasn’t far from my hotel. I arrived early in the evening and there were only a few tables filled. The bartender was friendly and was more than happy to speak English and recommend places for me to go before leaving Taitung the following day. Had I found the bar earlier in my trip, I would have had a better itinerary for my time in the city.

I enjoyed the decor at Kasa — it was unique and felt comfortable. In the cooler months, I would have enjoyed a beer at the outdoor tables. It seemed like a more popular spot for students, with some of the local expats joining the crowd just as I was preparing to depart around midnight.

After my whirlwind trip through Taitung, I wasn’t ready to get back on the train and return to Taipei. Even with the weather and the biking mishap, I felt relaxed at the end of my stay. I was most impressed by the traffic in the city — cars stopped for me to cross the street and I never saw anyone speed through a red light like I did in Tainan. It was a quiet weekend trip surrounded by friendly people and beautiful scenery.

Have you been to Taitung? What did you think of the small seaside city?