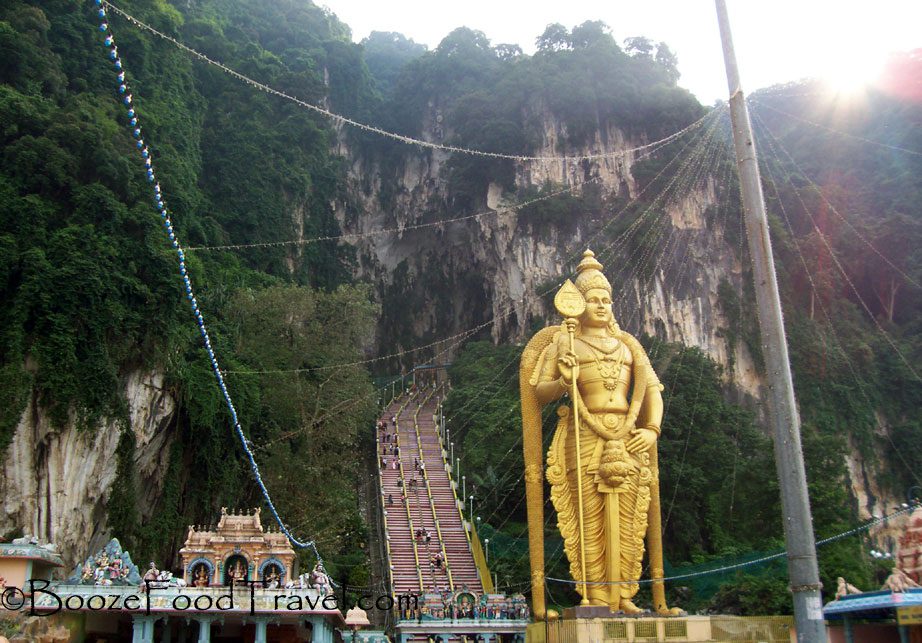 One of the most important sights around Kuala Lumpur is Batu Caves, which is just a few miles outside the city. It was only half an hour by taxi from our hotel by Times Square. This was our top destination in KL–all other sights in the city were secondary (though were still quite impressive).

This was the first Hindu temple I’ve ever visited, and I was impressed. At the stairs leading to the entrance is an enormous statue of Lord Murugan–supposedly the largest in the world. From that statue it’s only 272 steps (they’re numbered) to the cave in the oppressive Malaysian humidity. Fortunately, we were there early when the heat isn’t quite as bad.

As we soon realized, the Batu Caves is not like the caves we were used to visiting in the US–it’s still a bit hot inside. The cave is huge–wide with high ceilings and plenty of Hindu worshippers mixed in with the tourists. I’m sure I would’ve found the trip even more enjoyable if I understood a bit more about Hinduism. There are a lot of statues and scenes depicted in the caves, but no explanation unless you’re willing to ask. Along the steps into Batu Caves, there are quite a few macaque monkeys roaming about. These little creatures can be seen climbing on the statues and jumping in front of tourists. One tried to snatch the water bottle out of my father’s hand. Fortunately, it doesn’t seem like anyone trained the macaques to steal from tourists, which I have encountered in Bali.

There is also the Dark Cave next to Batu Caves, which tourists must pay to enter. We decided to skip it and head out to other parts of Kuala Lumpur. We found a taxi in the parking lot to take us out to Compleks Budaya Kraf for a dose of traditional and contemporary Malaysian art.