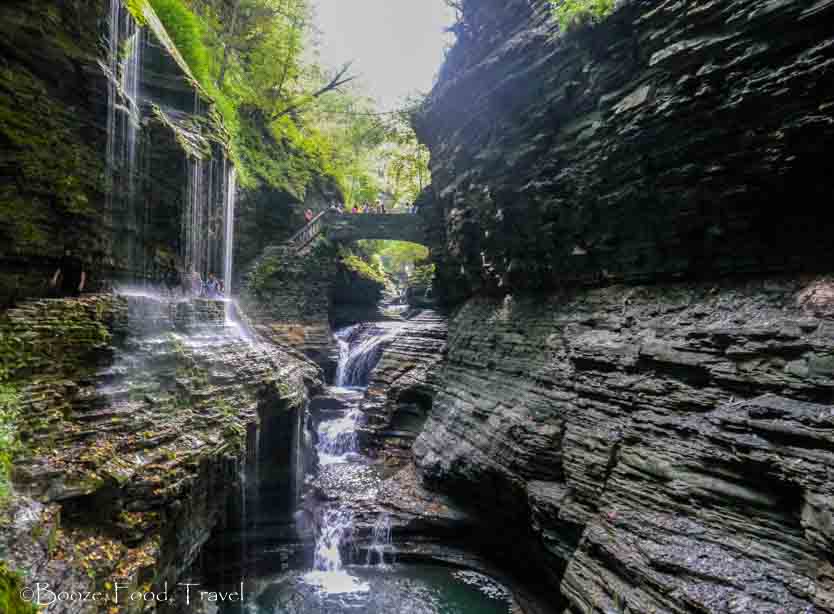 I had seen some pictures of Watkins Glen, but I didn’t know what to expect when I got there. I did no research as usual other than get directions. This made Watkins Glen more of a pleasant surprise for an early autumn trip.

The photos I had seen were only a glimpse of the state park I was intent on visiting. There were two things I did not realize before arriving: it’s a pretty big state park and it attracts a lot of visitors. 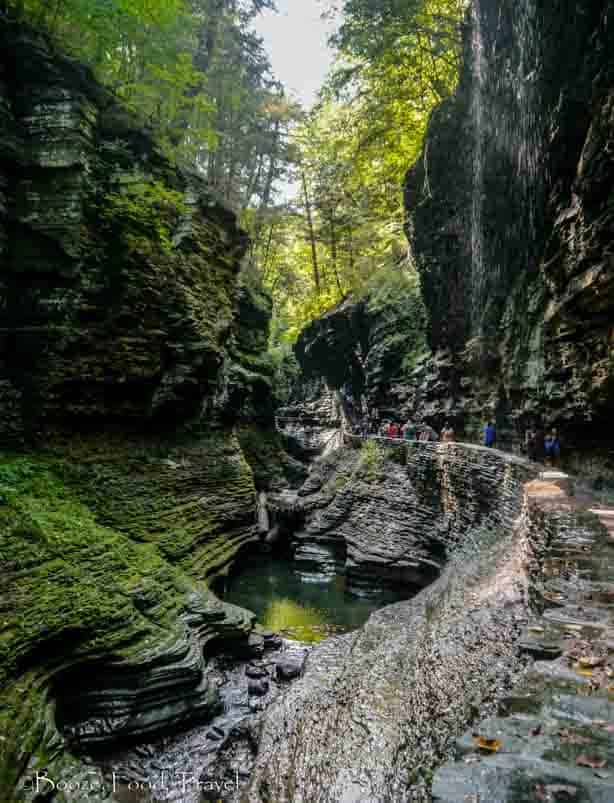 As I couldn’t find a decent hotel in the town so close to my travel date, I settled for staying well outside the town. This meant that I had to pay for parking at Watkins Glen. It was only $8 to park for the day, and that included entrance into the state park. It would’ve been free if I was able to walk into the park, but the fee goes to upkeep, so it’s no big deal. 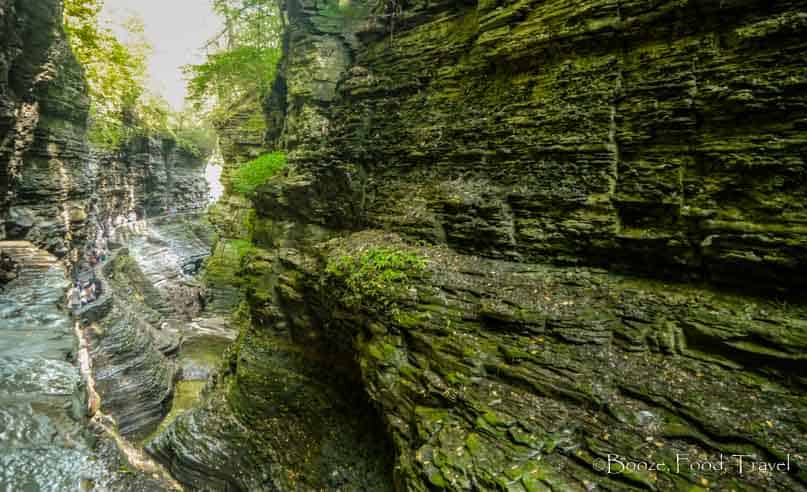 I followed the crowd from the parking lot into the park. It’s not difficult to find the trail to the gorge as all other trails lead to campgrounds.

The reason to visit this magnificent 778-acre state park is the gorge that was carved out by Glen Creek and descends 400 feet. The shale cliffs that surround it make it a beautiful sight along with all the waterfalls.

I took the Indian Trail, which is the high road, from the bridge–it looked like there were a lot of people on the lower Gorge Trail at the time. I figured it looped around and the higher trail might offer better views.

The views weren’t so good from the higher trail, but it looped back through the gorge for all the views that visitors need to see. It was certainly a better option than having to turn around in the crowd had I stayed on the lower trail.

As I walked through the gorge, I stopped at all the usually places for photos. Coming from western end of the park, the gorge becomes more impressive the farther you walk. It starts off with quiet nature and leads to steep cliffs and waterfalls.

Along the way, the light shone through the trees into the gorge, giving the area a more magical aura. The beams of sunshine against the shale and water provided a beautiful contrast. It did make some photos a little more difficult though. 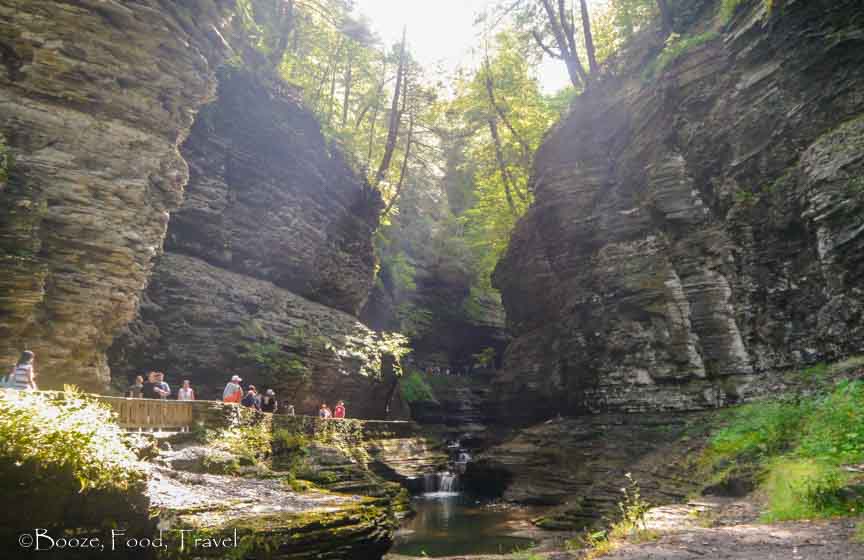 It’s at the Glen Cathedral and Cavern Cascade that most people loiter a little longer to take in the view. Midday makes it a bit more difficult to get a photos with fewer people. There were, however, some areas at which I could minimize the crowd or at least crop them out. 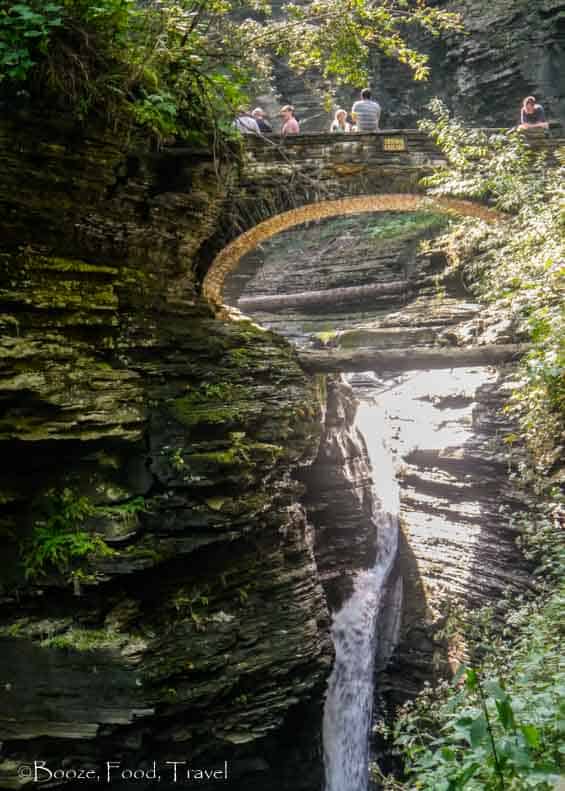 It would have been a better experience had I gone to Watkins Glen first thing in the morning, especially as it was warm for an autumn day, but it was just as magnificent in the afternoon. Sure, it was more difficult to tune out all the other tourists and just listen to the creek flow through the gorge, but it was still a beautiful afternoon. It was also easier to tune out the tourists next to a waterfall. 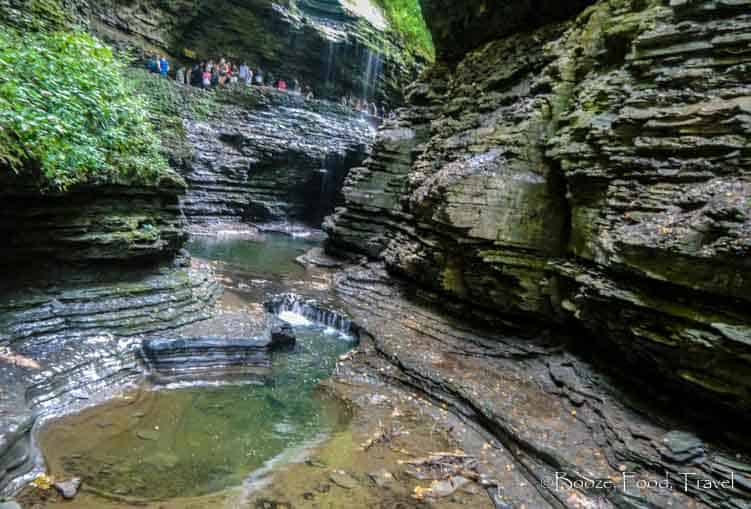 The reason for the late arrival at Watkins Glen is that I wanted to get to Taughannock Falls State Park first before crossing back to the Seneca Lake area. This was an easier route from the hotel.

In all, even with the crowd, the hike only takes about two hours. That left plenty of time to drive around Seneca Lake in search of wine.