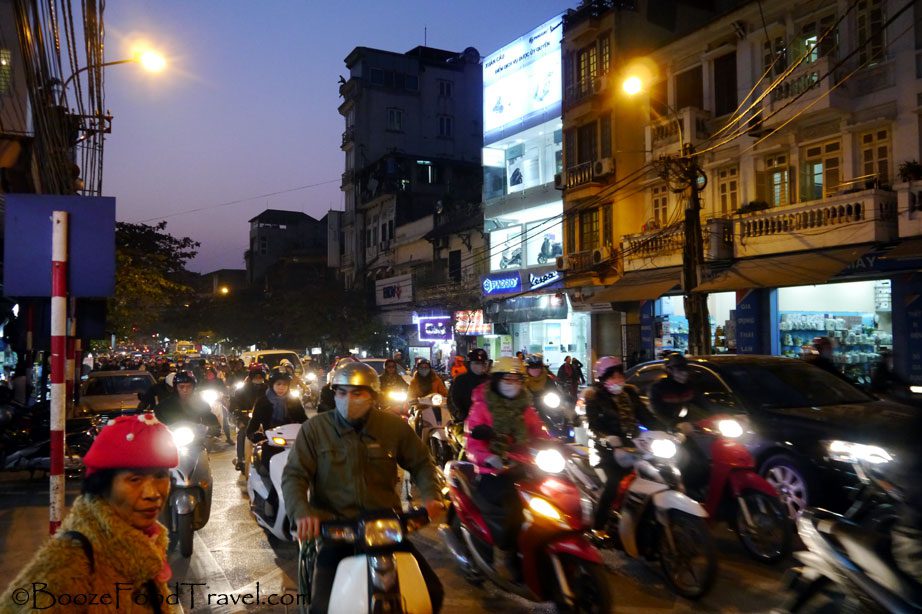 After two months in Tokyo, traffic in Hanoi was a shock. All the motorbikes make the narrow streets of the Old Quarter of Hanoi chaotic and slightly frightening. I had to relearn lessons I learned from crossing busy streets in China.

Even after walking the streets for a while, I’m a bit more cautious than most. I try to wait for slight breaks in traffic on the busier streets before attempting to navigate the throngs of motorbikes that pass around me.

One lesson from China that I quickly relearned was to use blockers on the busier streets. In China, I used to wait for a group of locals to get impatient with traffic and just enter the roadway. I would walk on the far side so that I wouldn’t be the first person hit by traffic. Here in Hanoi, there aren’t as many pedestrians crossing at one time, so I usually wait for a car to inch its way through traffic or I walk alongside a bicycle vendor. Fortunately, I haven’t experienced anything that I would consider a close call.

One of the first things I noticed while walking through Hanoi was that sidewalks really aren’t meant for walking. Unlike in China, where some drivers were just assholes that wanted to drive on sidewalks (I yelled at a few and refused to move when they honked at me), Hanoi just uses sidewalks for outdoor restaurant seating and motorbike parking — it leaves no space for walking, which leaves the side of the road as the only semi-available walking space.

Being a pedestrian in Hanoi takes some getting used to. After a while, it just gets easier to casually cross streets during rush hour traffic. There are still some major streets that I won’t even attempt to cross, which is why I haven’t gotten a good look at the bridge over the Red River.