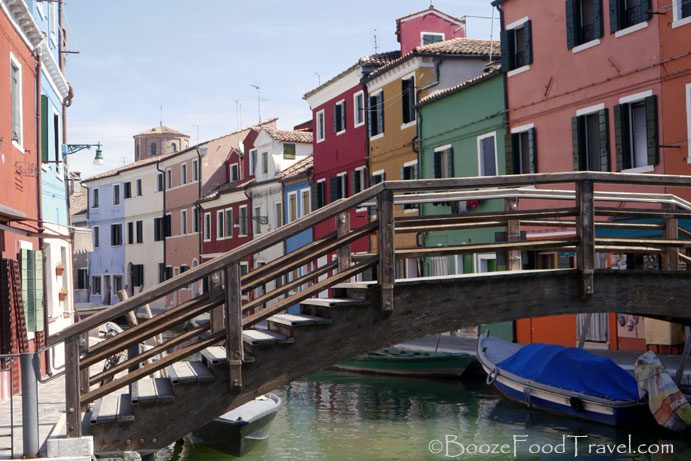 “When the color achieves richness, the form attains its fullness also.”
– Paul Cezanne

Beyond the main islands that make up Venice is more historic Italian beauty — it requires a water bus ride from within the city to the outskirts; it’s a journey on the water to the suburban canal towns of Murano and Burano.

The first thing I noticed on my trip to Murano from Venice was the price of the water bus — EUR 7 per ride. I figured since I was taking at least three rides, I might as well get the day pass for EUR 20. I wondered what sort of discount was offered to locals as this was certainly the most expensive public transportation I had ever encountered.

Murano and Burano are like Venetian twins — they’re always mentioned in the same breath when people talk about tourism outside the center of Venice. These were never part of the wealth class of the glory days of Venice — the islands were home to fishermen and artisans. They painted their home in vibrant colors, particularly in Burano, to make it easier for fishermen to find their way home in inclement weather. Today, those same bright houses on the canals are what draw tourists to the shores of Burano, while Murano has its colorful glass to attract attention. Murano is the larger tourist draw of the two towns in the Venetian Lagoon because it’s historically known for artistic glass products, which I wasn’t interested in seeing (I enjoy art, but colorful glass bowls are not my idea of inspiring). Glassmaking began in the area in late 13th century and Murano became the largest producer of glass products in Europe. While the industry has declined over the last two hundred years, Murano glass is still popular for its artistic quality and glassmaking remains Murano’s primary industry, which, of course, caters to tourists today. There isn’t much to see or do around Murano, but it’s still a pleasant town to walk through. Large glass sculptures are displayed in public areas to attract visitors to the shops that sell smaller glass souvenirs (none of which I could afford if I wanted). There were some amusing window displays, including glass zombie figurines and some comically pornographic miniature glass figures.

There was the impressive Basilica dei Santi Maria e Donato with its leaning bell tower. The interior of the church is supposedly impressive, but it was not open to the public when I was there (it might’ve been closed for lunch).

After walking along the canals in the heat, I took one of the local water buses through the town to a stop where I could change to a water bus that would take me to Burano, the island that was once know for lace — even Leonardo di Vinci once purchased lace from Burano to cover the altar at Duomo di Milano.

What I didn’t know at the time is that Burano is much farther from Venice than Murano. The longer boat ride gave me time to peer out over the water at passing islands, none of which I could name. I wandered the colorful streets — it was a delight to the eyes after month of wandering Italian streets with weathered structures and an excessive of graffiti — and I could’ve wandered those streets for hours if the town was bigger and if I hadn’t been so desperate to find a decent meal. Everything on the main street through town is there for the tourists — overpriced restaurants and gift shops that sold nothing unique. I ducked down alleys to avoid the crowds and search for an affordable lunch, but came up empty; the rest of the town is residential. I only managed to find a small market at which to buy a cold bottle of water.

After wandering through streets of Burano and coming to the conclusion that everything was too expensive and touristy, I headed back to the dock for the water bus. I ate fritto misto (fried seafood) at a stand near the dock — it was the freshest fried seafood I had tasted, but it could’ve used more lemon to balance the salt. The little stand with seating in the shade was overpriced, but still significantly cheaper than anything I found in the center of the tourist area. It gave me enough energy to walk a little more across the bridge to the neighboring island of Mazzorbo.

I was welcomed to Mazzorbo with a public garden that wasn’t as interesting as I had hoped. It might’ve been more enjoyable if there was a shaded path to walk around — the sun was wearing me down and there wasn’t enough of a breeze for relief. I headed back to the dock to catch the next water bus back to Venice.

Of course, I managed to take the water bus that took the long way back to Venice. I chose the one that would drop me off at San Marco Square — I knew it wasn’t a long walk back to my hostel from there, and there was a wonderful inexpensive shop that sold mini sandwiches and spritzes for less than EUR 2. By some miracle I disembarked at San Marco — I fell asleep for at least a half hour on the boat, only to awake in time to the glory of Venice unfold before me. Maybe it was other passengers scrambling for photos that woke me from my exhaustion, but it was worth losing an extra 15 minutes of sleep on the boat to get some of those pictures that were unobscured by the crowds walking the streets.

I was too exhausted to even stop off for a quick bite and a drink on the way to the hostel. I passed out for a while before heading out again for my second-to-last evening in Venice.