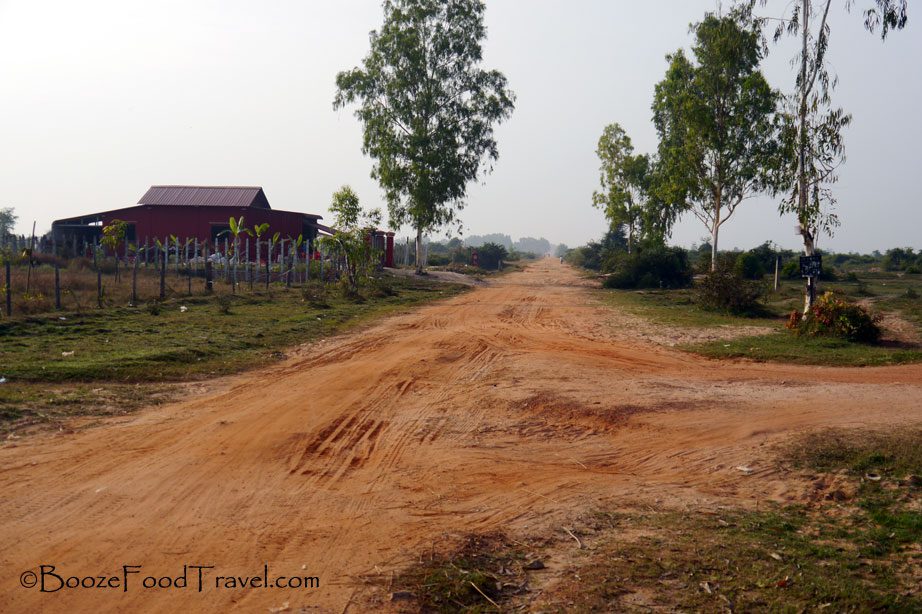 On my third day in Siem Reap, I decided to take a bike tour of sorts. I met a Dutchman on my tour the day before who happens to live in China, so we had lots to talk about, and we decided to take a long ride on New Year’s Eve. The bike ride turned out to be about 40 miles, which was more than I expected and about double my longest previous ride.

I rented a bike for $5 down the street from my hotel — the hotel had a secure parking lot for bikes overnight as well. I almost rented a bike for $3, but the $5 bike was a little lighter, which made it more appealing for a long ride in the heat of Cambodia. In hindsight, I probably should’ve changed bike seats as the $5 bike was not as comfortable.

My Dutch biking companion planned out our route for the day — we were going to ride from downtown Siem Reap to the Landmine Museum that was up near Banteay Srei and then head back into town via Angkor Wat. I didn’t realize that he had mapped out a route that went around the traffic through Angkor Wat on the way to the Landmine Museum — it was a pleasant surprise.

While the road we biked was more or less deserted, it was also a dirt road. We took that road for almost an hour before turning onto a main paved road that led to the Landmine Museum. We stopped a few times to enjoy the view on the dirt road — we also waved to all the children who shouted “hello” to us (something that doesn’t happen inside Angkor Wat or in Siem Reap). We saw no tuk tuks or cars on that road, only a few local bicycle riders and even fewer motorbikes.

As we began biking along the main road to the northeast of Angkor Wat, there were still few other vehicles — we left early enough on the ride to avoid the crowd that would be headed to Banteay Srei (our tour stopped there the previous day just before lunch and we arrived at the Landmine Museum a little before 11 am).

The Landmine Museum was much more interesting than I expected. There was a lot of history about landmines and how they spread across Cambodia. There was also the story of Aki Ra, who started out as a child soldier for the Khmer Rouge before defecting to Vietnam and then returning to Cambodia to begin de-mining the country on his own. The tour of the small museum was given by Aki Ra’s partner at the Landmine Relief Fund, Bill Morse. Besides clearing landmines in Cambodia, the organization provides education to orphans and college scholarships to even more Cambodian children.

After a small lunch next to the museum, we got back on our bikes and rode back toward Angkor Wat. Biking back was definitely more difficult as it got hotter and we were beginning to tire.

By the time we got near Angkor Wat, we began searching for roadside vendors with pineapple or other fruit. We managed to find one that was in the opposite direction of most tourist routes and much cheaper than the vendors closer to the entrance. The Dutchman showed just how out of practice I am with bargaining — I was so impressed by how much he talked the vendor down, I bought a whole pineapple on a stick and a couple bottles of water for less than $2 (probably would’ve cost twice that closer to the entrance).

As we got to Angkor Wat, we realized that it was much better to arrive when we did — it was much less crowded than when either of us had previously visited. We quickly discovered, however, that the inner area of Angkor Wat was closed for tourists (as are most tourist destinations during the lunch hour).

By the time we biked back to downtown Siem Reap, I was exhausted and my ass hurt from the bicycle seat. I just about fell over when I returned the bike — I was excited to get off the damn thing and got my foot caught as I jumped off.

I still managed to make it to midnight on New Year’s Eve, but I had to go to sleep shortly after so I could wake up for my boat ride to Phnom Penh.

I should mention that I had a face mask that I bought in Hanoi to avoid breathing exhaust fumes on the bike ride. It also kept dirt off my face. I highly advise using one in Cambodia (it’s also useful for riding in tuk tuks).