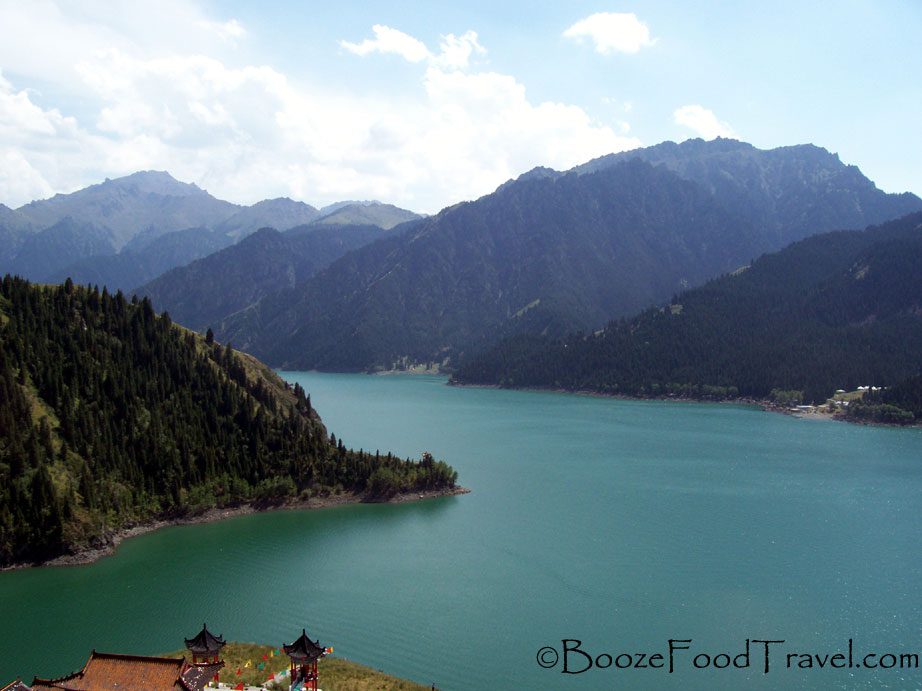 The summer of my first year in China my parents came to visit — we hit four cities in a little over two weeks. For our second stop, we spent a few days in and around Urumqi.

We took a ride from Urumqi to Tianchi (天池), Heavenly Lake, which was a little more than an hour away from the city. (Note: there are at least two Heavenly Lakes in China. The other is in the northeast.) This turned out to be my favorite day in Xinjiang. It was also some of the best weather I had for traveling in China.

Rather than hiking up the mountains to the lake, which probably would’ve taken a few hours, we took a cable car up to save us a lot of time and provide us with some great views of the mountains. Once at the lake, we encountered the swarms of tourists that can be seen at any attraction in China — though this one had significantly fewer people than I was used to seeing. If we so wished, we could’ve dressed in some “traditional” Chinese costumes and had our pictures taken (we had our pictures taken plenty of times considering we were the only foreigners there). We took a boat from shore to the other end of Heavenly Lake where there were two Taoist temples set atop a great number of stairs. The second, smaller temple was set much higher up the mountain — the inside used the mountain as its back wall. There was no one else in the smaller temple (my parents were slower climbing the steps). Away from the crowds, it was silent looking out at the lake and mountains from this temple. On our way back to Urumqi, Xinjiang’s capital city, we stopped along the river to eat watermelon. Nearby, another small group was doing the same and offered to lend us a knife to cut the watermelon as we had neglected to bring one. Across the street from the river was a small Kazakh village — the road to Tianchi has quite a few of these yurt villages scattered around, and tourists can stay in some of them for a night. We were given a short tour of one of the homes and entertained with some accordion music (I didn’t realize accordion music could sound good).