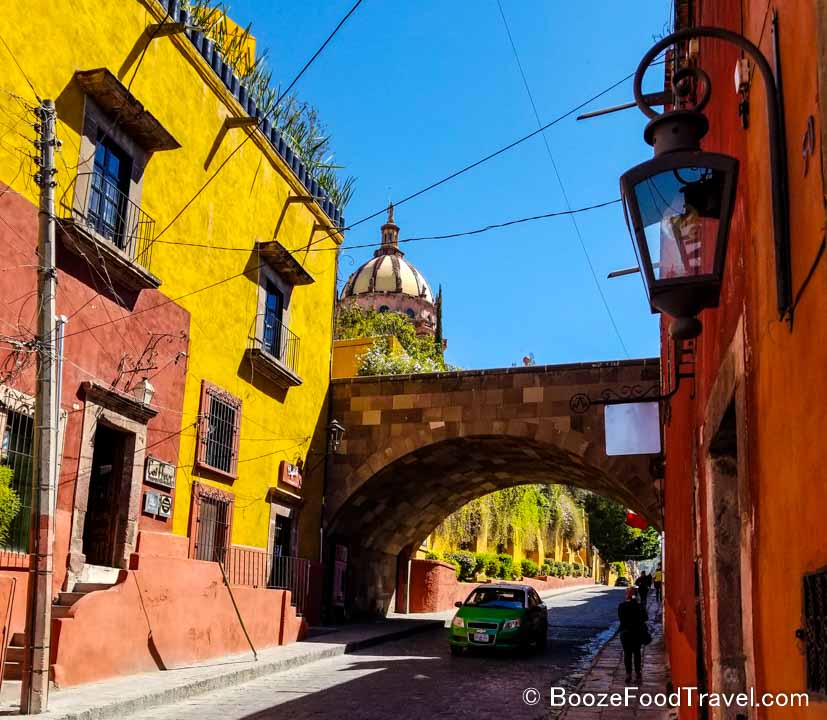 “The question is not how to get cured, but how to live.”
– Joseph Conrad

My trip to San Miguel de Allende did not go as planned. I booked a room at Casa Luna specifically to relax — I had intended to sit outside with a beer or mezcal while reading and enjoying the quiet comfort in Mexico. That was impossible.

The evening before my arrival, I got violently ill — I followed my usual precautions when traveling to places with questionable food safety, but it wasn’t enough. I won’t go into the details, but I woke up multiple times overnight to run to the bathroom. I had horrible chills and my body was weak. I contemplated foregoing the five-hour bus ride to San Miguel de Allende and taking the loss on the already-booked hotel. But I decided to go for it rather than suffering in my Mexico City hotel room.

I drank and ate nothing that morning before dragging my body to an Uber that would take me to the north bus station. The hope was that if there was nothing in my body, it would eliminate the necessity of running to the toilet on the bus. And it worked. I was able to sort of rest on the bus ride (as much as one can rest on a bus).

The taxi ride from the San Miguel de Allende bus station was not as pleasant along the cobblestone streets — my stomach did not enjoy the ride. As soon as I checked in to my hotel, I asked for directions to the nearest pharmacy where I purchased a liter of Electrolit, two liters of water, and a bottle of Gatorade. I immediately drank the Electrolit, which tastes better and costs less than Gatorade, along with some water and went to sleep amid the construction noise next door.

The second day I felt a little better. I even attempted to eat breakfast at the hotel, which was scrambled eggs and chorizo — I skipped all other options and the beans on the side as a precaution. I headed back to the pharmacy for more Electrolit and water and walked around for the morning. I had little direction for the day, but knew I should make my way to the town square and Parroquia de San Miguel Arcángel.

The narrow streets in San Miguel de Allende are beautiful — the colorful houses and cobblestone streets give the town a quaint feel, which is why so many Americans now live there. Much of the architecture reminded me of Casco Viejo in Panama, but better maintained. It’s picturesque and soothing in late winter; the mornings and evenings were still cool and the sun was bright all day.

After walking around for the morning, I was exhausted by noon so headed back to the hotel. Two days and only some eggs to eat was not enough for sightseeing. This was the basic itinerary each day — a few hours of wandering after breakfast followed by a nap and more wandering before going to sleep early. It wasn’t an exciting tour of San Miguel de Allende.

I was tempted to find a doctor — for the first time in my life I purchased travel insurance that would’ve covered the cost, but I decided against it because all I’d get would be some antibiotics. This wasn’t much different from the times I got sick in China, and I figured that if I could survive another day, I would be alright; if not, I could still see a doctor.

As I began feeling better during my stay, I wandered through the streets — there are so many beautiful corners that I kept venturing farther to see how my stomach held up. I missed a few sights, like the bull fighting ring, but I wasn’t disappointed. Parroquia de San Miguel Arcángel was the highlight of the town.

I also checked out the Historic Museum, Cultural Institute, Benito Juarez Park, and Instituto Allende. The Historic Museum had some local art, but not much else. Benito Juarez Park was not worth the walk — it was not as impressive as the town. And Instituto Allende was only the interior courtyard and a cafe, which would’ve been a great place to relax had I not been sick (I went the entire three days without a drop of coffee).

I spent a lot of time wandering around the town square and the surrounding streets — it was pleasant to sit in the park and watch the people. In the evenings, when I typically would’ve been at a restaurant with sidewalk seating, the lights around the church made the area as beautiful as it was in the daytime. There were also some roving mariachi bands to provide background music for all the people passing through.

In a town that has little to do other than eat and drink, San Miguel de Allende was still a worthwhile destination despite the fact that I couldn’t really partake in either. I probably wouldn’t return to San Miguel de Allende on another trip to Mexico because there wasn’t much to do. I know I could find plenty of food and drinks elsewhere in the country; there are also more than enough relaxing towns. I would, however, recommend other travelers to visit the town and relax for a few days among the colorful houses.

Have you ever attempted to sightsee while sick? How did it go?